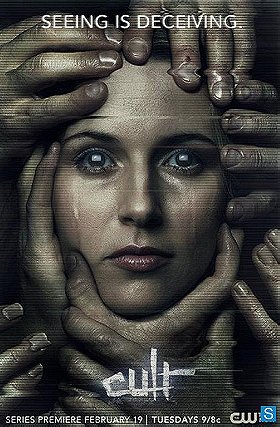 
After a rash of disappearances and a likely murder, an inquisitive, young female production assistant on a wildly popular television show called Cult joins a journalist blogger in investigating the rabid fans of the series who might be re-creating crimes seen on the program, in real life.
Release date: 12 February 2013
Tags: Mystery (2), Psychological Thriller (2), Tv Series (1), Thriller (1), Horror (1), Psychological (1), Cult (1), 2010s (1), Canceled (1), The CW (1), Matt Davis (1), Cult Thriller (1)
My tags:

EatMorePez voted for an image 4 years, 11 months ago

EatMorePez added this to a list 5 years, 1 month ago

"The CW's Cult was about a TV show named Cult whose star may have been the leader of a cult. Got it?"

kiradari added this to have watched list 5 years, 10 months ago

The Eggman added this to have watched list 6 years, 5 months ago

EatMorePez added this to a list 6 years, 8 months ago

"2 episodes After two low-rated airings, The CW moved Cult to a Friday night burn off slot. After five weeks of that, the network pulled the show altogether. The remaining six episodes were later broadcast in the summer."