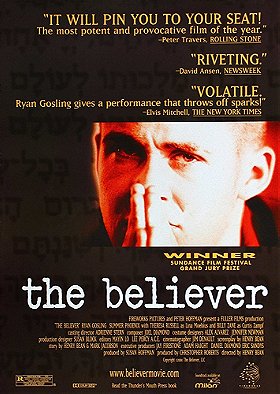 View all The Believer lists

View all The Believer videos

jaytoast
2 votes
I watched this because I had heard that it was better then "American History X"... which it is not and I'm rather surprised that the two films could be compared to each other.

I'm also pretty surprised that after "Homicide" (1991) got trashed by critics for being 'yet another film about a Jewish man hating Jews', that this film was so well praised.

Sure the acting i... read more

steven2185
1 vote
Inspired by Daniel Burros life, a jew, member of american nazi party and Ku klux klan. Could be see like the figure of self hated jew, and could be continued by the reading of Bernard Lazare, "the antisemitism, his history and his causes"

Rollo Tomasi
1 vote
The poster quotes read "It will pin you to your seat", "Riveting", "Volatile". It's all three thanks to a brilliant Ryan Gosling performance. However, it's hard to get behind this film too much when the story-teller omits such important things like telling/showing us what initially drove Danny to turn his hatred on to his own people. I find it hard to believe that it was built on classroom debate ... read more
View all The Believer reviews

CarminaX added this to a list 11 months, 2 weeks ago
My Favourite Movies (295 movies items)

Exclusive added this to a list 3 years, 6 months ago
My Favorite Actors: Ryan Gosling (21 movies items)

Nusch voted for an image 3 years, 11 months ago

Leiska added this to a list 4 years, 1 month ago

kathy voted for an image 4 years, 12 months ago