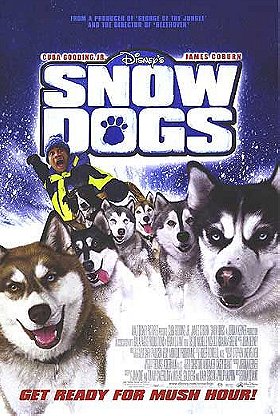 liz
I just sat down to watch this randomly since it was on the Disney channel and I was pretty bored. I was pleasantly surprised, but mainly because I had REALLY low expectations for this movie. Of course, this type of movie has been put out before: suitable for the family, cheesy and cutesy humor, and a heartwarming happy ending. But, overall I enjoyed my time watching it. It was cute, but don't expe... read more

johanlefourbe
Honestly, I didn’t expect much from this flick but since I have a weak spot for James Coburn, I thought I might as well give it a shot. Unfortunately, the whole thing turned out to be pretty lame… I mean, as soon as you have Cuba Gooding Jr. playing the lead, you already pretty much know that the whole thing will stink. I mean, the guy was so promising, first in ‘Boy n the Hood’ and he lat... read more

filmbuilder
James Coburn died in 2002, he made many movies before dying of a heart attack, 'Snow Dogs' was one of his last

'Snow Dogs' is boring, poorly acted and sometimes racist; Cuba Gooding Jr. and James Coburn play a father and son - a black son and a white father which in a few scenes, people say "Yeah, it's obvious!" sarcastically which in my opinion is rather racist (do they allow discr... read more
View all Snow Dogs reviews

Televi added this to a list 9 months, 1 week ago
Cinema (557 movies items)

AdeleDazeem added this to a list 3 years, 5 months ago
every movie i've ever seen (so far) (1221 movies items)

Gaby Valeanu added this to a list 4 years, 2 months ago
Movies i have watched (724 movies items)

becca85 added this to a list 4 years, 5 months ago

Agent Kermit D. Fonz added this to a list 4 years, 8 months ago
Disney Live Action: The Best and Worst of (83 movies items)

Leo added this to a list 4 years, 9 months ago