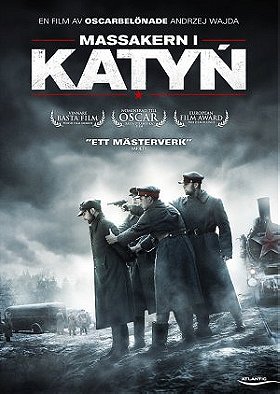 
Tells of the Polish officers who were murdered near Katyn by the Soviet secret service NKWD in the spring of 1940. It is also the story of their relatives, many of whom waited for years for the return of their husbands, fathers, sons or brothers. After the invasion of the German Armed Forces on September 1, 1939, and the occupation of east Poland a few weeks later by the Red Army as a result of the Hitler-Stalin pact, all officers of the Polish Army--including reservists, police officers and intellectuals--were taken into Soviet custody.
Release date: 21 September 2007
Tags: WWII (5), War (4), Polish (4), Drama (3), Red Army (3), Cover Up (3), Nonlinear Timeline (3), Flashback (3), Death Of Husband (2), Shot In The Head (2), Slaughter (2), Nazi Uniform (2), Tragic Ending (2), Prisoner Of War (2), Death Of Brother (2), Female Perspective (2), Nazi Officer (2), Dead Body (2)
My tags:

samira added this to a list 4 months ago
Every Movie Ever! (13121 movies items)

AKB48Fan added this to a list 2 years, 4 months ago

"In 1940, at the beginning of World War II, Soviet soldiers conduct a mass execution of captured Polish officers. With Hitler's forces rapidly advancing into Eastern Europe, a surviving Polish officer, Lt. Jerzy, at great risk to his own life, chooses to stay behind with his wife, Anna. As the Germans round up Lt. Jerzy and other officers, propaganda efforts cover up the truth about the Soviet soldiers' shocking brutality. A well done and shocking movie speaking for those who cannot speak for th"

Nusch added this to a list 4 years, 9 months ago
The True Story of Communism/Socialism: (62 movies items)

propelas voted for an image 5 years ago

Aliceinwinter added this to a list 5 years, 1 month ago

"Setting: Poland An examination of the Soviet slaughter of thousands of Polish officers and citizens in the Katyn forest in 1940."

Nusch voted for an image 5 years, 6 months ago