How to achieve it?
First of all you have to obtain the Channeling Stone which is only available after having completed the game with the Good+ Ending. Then you will find it in Convenience Store 8 on Bachman Road, in the north area of Old Silent Hill.

The Stone needs to be used in 5 locations:
1. Otherworld Midwich Elementary School roof
2. Otherworld Alchemilla Hospital gates (before the Floatstinger Boss Fight)
3. Yard of Norman's Motel in the Resort Area
4. Within the houseboat (before entering the Lighthouse)
5. Atop the Lighthouse
After that the game ends with the UFO alternative.

Personal Comment: Omg, the music in this ending is fantastic! Mr. Yamaoka really is a master of his craft. And the way it parodies a certain film is hilarious, considering this is actually a nerve-wracking horror survival game.
Kami's rating:


How to achieve it?
The UFO Ending is only available on the "Restless Dreams" (Director's Cut) Edition and the HD Collection. After completing the "Born from a Wish" sub scenario the secret item Blue Gem can be found by one of the toilet stalls in the Observation Deck where James begins his journey.

The Gem must be used in 3 different locations:
1. In the garden of the Otherworld Brookhaven Hospital (after the Flesh Lips Boss Fight)
2. Beside the small row boat on the Toluca Lake dock (after the Eddie Bossfight)
3. Near the window of Room 312 in Lakeview Hotel (before watching the video tape)
After that the game will end with the UFO alternative.

Personal Comment: The mere fact that Harry is still in his old PS1 graphics is brilliant. Also the idea of a crossover in general is great and the music continues to be fitting and fun to listen to.
Kami's rating:


How to achieve it?
After defeating 333 monsters Heather acquires the Heather Beam (which is only possible after multiple playthroughs though). With this Heather Beam she has to kill at least 30 monsters before she enters her old home in the Daisy Villa Apartments. With these circumstances having been met the UFO ending plays as soon as she has entered the room.

Personal Comment: This ending is so fantastic because it kinda picks off where the last one ended and convinces with its accurate continuity. The art style is nice and that dorky, derpy song...it's just so catchy!


How to achieve it?
When you have completed the game once you can find the Key to Room 502 after waking up in front of Alessa's house. It is located on top of the fire escape by the Post Office. At the end of the game you have to use it on room 502 at the Otherworld Riverside Motel. After that the UFO ending commences.

Personal Comment: Mira is in this ending! I mean, wow! That means we already have a very big, happy family on the space ship by this point. (Mira is the Shiba Inu from the Dog Ending in Silent Hill 2)


How to achieve it?
Should you manage to shoot all of the UFOs dotted around the game, you'll be rewarded with the UFO Ending after defeating the Phantom.

Personal Comment: This time the protagonist is not adopted into the great SH alien family. But it features Robbie the Rabbit and the ending is as hilariously ridiculous as the others, especially the music.


How to achieve it?
You must shoot Alex Shepherd's mother, make the choice to not forgive his father and save Deputy Wheeler's life with a medical pack.

Personal Comment: It differes from the previous UFO endings not only in its style but also with the absence of the other games' characters. That's probably why the achievement for this ending is mockingly titled "No Dogs Allowed".


How to achieve it?
You must have finished the game once to achieve this ending. On the second playthrough you must call the number on the billboard (United Fruitcake Outlet 555-3825) by Theresa's. This enables Harry to take photos of UFOs with his camera. You must capture all 13 of them which are located:

1. In an alley behind Theresa's or Clear Picture, under the street light.
2. In the Boat House in the Dark Woods, the hole in the corner of the ceiling.
3. On a barrel outside the Orion Hunting Lodge.
4. In the sky between the goal posts at the Midwich High School football field.
5. In the sky above the roof to your right after exiting the rooftop door of the Cat House/Honey Trap/Lotus.
6. Hovering over the statue in the middle of the Midwich High School courtyard.
7. In the tree outside the entrance to the Midwich High School gym.
8. In the parking garage below the mall entrance level, Downtown.
9. In the fish tank in The Family Pet shop.
10. On a shelf to the left of the door as you enter the Green Lion Pawn Shop.
11. In a barred-off tunnel to the right of a ladder leading toward the exit of the Sewers.
12. At the end of the left dock outside the Lakeside Amusement Park.
13. Underwater, down the shore from the lighthouse clinic.

Personal Comment: This ending is overflowing with references to the other games. Silent Hill fans should take a close look at the environment and the characters' behaviour. An excellent crossover and an excellent mindfuck for the most recent UFO ending. The anime sytle isn't too bad either.


How to achieve it?
You need to have finished the game with the "Rebirth Ending" or all three regular endings ("Leave", "Maria", "In Water"). Having met these circumstances you can find the Dog Key in a dog house across from Rosewater Park, directly west of Jacks Inn.
Use the Key on the Observation Room in the Lakeview Hotel and the Dog ending will play.

Personal Comment: It's a very clever and funny easteregg and Mira is adorable, how could I not love her.
Kami's rating:


How to achieve it?
After you've completed the game once the side quest Digging Up the Past will become available. To complete it you must locate 7 artifacts which are buried in front of barrels with lit candles on top of them. To obtain them you need a shovel. The artifacts' locations are the following:

With that, the quest is completed and after the game's final scene (confrontation between Murphy and Anne) the Surprise End plays.

Personal Comment: I'm not a big fan of the "animated" Joke endings, and I don't even think this one looks especially authentic despite its graphics. But the idea is brilliant. Gathering all the old characters like that and Pyramid Head cutting the cake. And I also like how the artifacts from the sidequest all hint at the previous games. 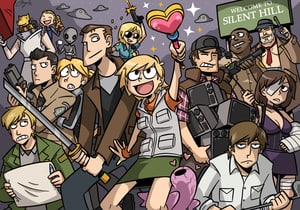 Because I find it fascinating how they could add such hilarious and clever joke endings to a game which is so haunting and disturbing. Because even after you went through your worst nightmares you still manage to smile and laugh at them.
I prefer the first three UFO endings, like I also prefer the first 3 actual games.

Imports I'm after by LordDarkrai

Games Played in 2012 by CelShader

Games I ♥ by Kami

The Evolution of Tom Hollander by Kami

My Road of Pokemon Games by Kami

The Evolution of Peter Vack by Kami