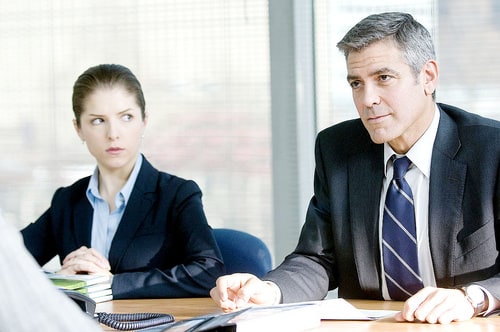 When I found out about Up in the Air, heard that Jason Reitman was the director, and read what it was about, I knew that it had all the potential in the world to be my favorite movie of the year. The emotional dilemma of deciding whether it's best to wallow in the comfort of being alone and not letting people into your life versus taking the risk and making yourself emotionally vulnerable is one that I've had a lot of time to think about, and I knew it'd be a pleasure to see it treated in a movie, especially by the guy who helmed Thank You For Smoking and Juno. Alas, Up in the Air isn't quite as strong as Reitman's prior two movies and it's not always as great as it should be, but there's no doubt that it's a wonderful piece of dramatic filmmaking. The blend of humor, smart dialogue and poignant observations about life is too good here to dismiss it.
lotr23's rating: 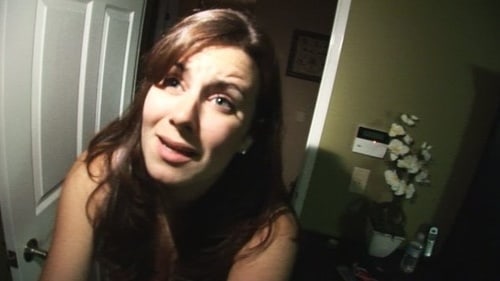 I stepped out of the theater after watching an afternoon showing of Paranormal Activity, and at that point, I don't think I was yet aware of the effect that the movie had had on me. I thought "Sure, that was very scary, much better than the gorefest we get from horror films nowadays." But the effect didn't come until the next few nights. It had been so long since I had been scared of being in a room alone at night. Paranormal Activity's brilliance is a result of how realistically it delivers its scares.
lotr23's rating: 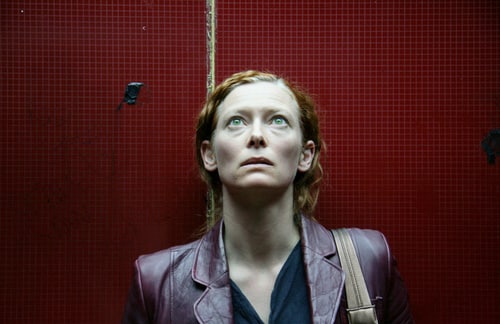 The best thriller of the year. What could've been a simple Lifetime movie about a kidnapped kid is instead so dark and given so much depth and complexity. The title character is the epitome of the flawed character that I love seeing depicted on film, and thank God that the movie doesn't give her a clear redemption at the end: we're left wondering whether she really has changed or not, and that's a credit both to Tilda Swinton's terrific performance as it is to the filmmakers.
lotr23's rating: 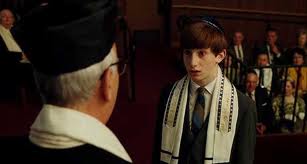 I laughed, I gasped, I was weirded out... all in the best way possible. You have to love the fact that Ethan and Joel Coen never give in to convention. A Serious Man is a wild, unorthodox ride on the train of unconventionality, and if that were that, I wouldn't be too impressed, but the fact that they pull off so much dramatic effectiveness and send the message they're trying to send so intelligently makes this even better. It's hard to be, um, serious while watching this film because the laughs generally overtake everything else, but there's never any doubt about what Sy Ableman would call the eminently excellent script and performances.
lotr23's rating: 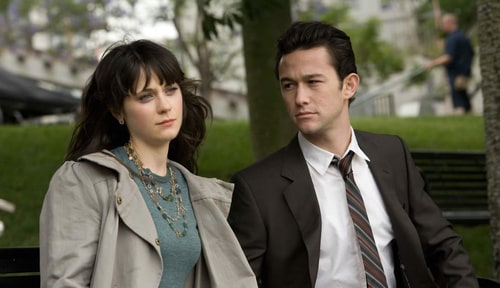 This movie is blessed with such a witty-yet-subdued script, and it moves along at a nimble pace, yet its decision to show events out of order never confuses the viewer. If anything, it makes some things even easier to understand and the movie more interesting. Sometimes in life, it's easier to understand things in retrospect. That's the reason why (500) Days of Summer benefits so much from the moments in which it shows the sad reality first and then takes us back to the blissful past. It's an inevitable truth that when we're feeling blah in the present moment, we start thinking about how the past was so much better, without realizing that the memories we're focusing on from the past are probably just the good ones, and that there were probably just as many blah moments in the past. (500) Days of Summer recognizes that this is a problem that afflicts people and isn't afraid to depict it. When we think too much about what we WISH for, the results can often be frustrating, which is easily why the "Expectations vs. Reality" segment is easily one of the best cinematic sequences of 2009. Oh, and did I mention that the movie also has a fantastic soundtrack?
lotr23's rating:

This I didn't expect. The sci-fi genre is hardly ever my thing, and Star Trek just looked like another summer blockbuster movie. I wasn't prepared for what a thoroughly entertaining film this would be. Some would've thought it'd be impossible to balance out what was wanted by diehard fans of the series with the expectations of newcomers, yet that is exactly what was done. It's even more amazing that even though there was so much narrative prefacing to be done in this movie, it was still so freaking awesome, and at the same time, that makes me think that the sequel could be even better - I'm incredibly excited about it.
lotr23's rating: 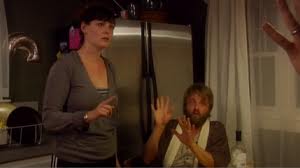 I'd be surprised if anyone else's top 10 list for 2009 features Humpday. Those who haven't heard of it, don't get freaked out when you see the poster: it's not gay porn. Far from it. It doesn't even have anything to do with homosexuality. It has to do with how we see ourselves, how we want to see ourselves, and how we want others to see us. Why is it that, when people get married, the side of their personality that most "clicks" with their spouse seems to take over who they are and they essentially "lose" a big part of who they were before they decided to settle down? What about people who choose to rebel and not get married and instead be hippies who travel to a bunch of different countries and claim that they grow a lot from experiencing cultures and having weird sexual experiences? Do they actually get fulfillment out of that, or is it out of a desire to be seen as cool? The best thing about Humpday is not just the fact that it addresses those questions, but that it does so with a dollop of both realism and hilarity.
lotr23's rating: 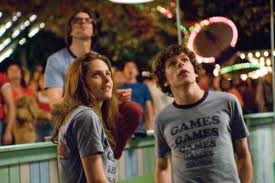 If Quentin Tarantino and James Cameron weren't such brilliant bastards and if they hadn't both released a film this year, there's no doubt in my mind that this would've been at the top of the list. What I'm about to say will make me sound ridiculous, but it doesn't make it any less true: I'm in love with this movie. Head over heels. I've watched it several times, and I can't get tired of it. I'm in love with its authenticity, its honesty and its refusal to give in to slapstick cliches. It's a shame that it's also because of all those things that the movie did poorly at the box office and that most people think it's nothing special. It sucks when what you love bores other people. It sucks when people love the loud explosions in Transformers better than something as masterful as the dialogue and the performances in Adventureland. The movie deals with those aimless, angst-filled post-college months that I had just recently been experiencing, and the accuracy of its depiction of that toilsome moment in one's life is just shocking. There are so many scenes in this movie that make my heart melt. Greg Mottola achieved comedic greatness with Superbad and now dramatic greatness with Adventureland. As I said in the review, my only problem with the movie was the ad campaign, which plastered "From the director of Superbad" all over it and made it look like a comedy, thus leading to the disappointment of those who saw it and failed to see what a brilliant drama it is. On the DVD commentary for the film, Mottola says: "My point wasn't to make something that was 'cool.' There's a lot of cool stuff out there for people who want 'cool.' This is for the uncool people. We need something, too, you know?" Yes, we do; thank you, Greg Mottola, and I mean that sincerely. I hope you continue making films like Adventureland, regardless of what the studio heads tell you.
lotr23's rating:

I'm not so adept at noticing cool or even great special effects in movies, and the thing is, that even if I do, I don't often care much. Special effects don't impress me as much as other things in movies, like great acting. But you'd have to be blind not to be flabbergasted by the technical accomplishment that is Avatar. The special effects here aren't just great; they are mindblowing. If that were it, it wouldn't be enough to call Avatar a masterpiece... but that's not all. This movie is a perfect blend of relentless entertainment and staggeringly intelligent social commentary on several fronts. Think about what a tough task James Cameron had having to fulfill expectations of, um, Titanic proportions (literally). I can't believe he pulled it off. Those who are calling the plot cliche are failing to see the freshness of the film's insight on political and environmental concerns. Avatar is a cinematic milestone in every way imaginable.
lotr23's rating: 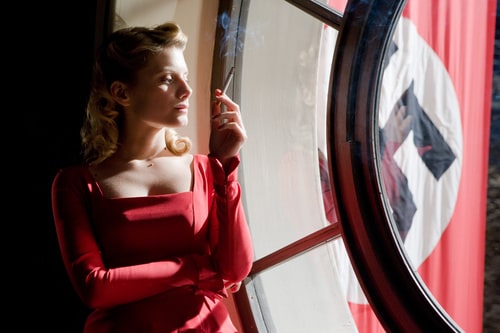 Plain and simply, this movie is heaven for cinephiles. Leave it to Quentin Tarantino to produce something so bold, so unabashedly entertaining and so intelligent. The ironic thing here is that, of all the movies in my top 10 list, Inglourious Basterds is the only one I didn't review. Why? Part of it is because I was at a busy time in my life when I first watched it, but I think that there's an even more important reason, and I'm not ashamed to admit it. I don't think a review that I write would do this film justice. I'm not smart enough. You see, I think Pulp Fiction and the Kill Bill movies are just as brilliant, and I have watched those SEVERAL times, yet I really don't think I'd even know where to start if I had to write a review for them. But the fact that I don't know what I'd write in a full-length review of Inglourious Basterds doesn't take away at all from how much I freakin' love it. It's so sophisticated and every scene is teeming with scrumptious dialogue and pitch-perfect performances. As those who have seen it know, the last line of the film is "I think this may be my masterpiece," which I think is actually Tarantino giving himself too little credit. He's given us masterpieces before. This just happens to be another one, and it also happens to be the best film of the year.
lotr23's rating:

Best movies of 1984 by the giraffe

Best movies of 1982 by the giraffe

Best movies of 1983 by the giraffe

Lists I'm following by the giraffe

Best movies of 2009 by the giraffe

Top performances of 2010 (alphabetical) by lotr23