Imaginary Places to Visit -- A Wishlist 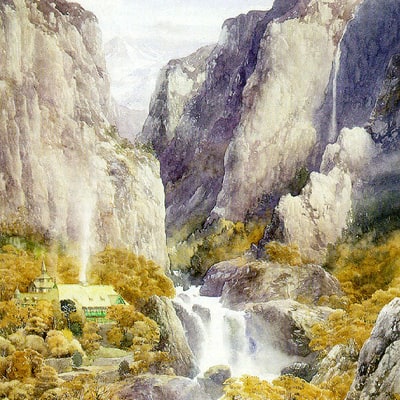 Rivendell is the home of Master Elrond, and one of the more mystical places in Middle-earth. Because of the presence of one of the three rings, time does not pass as it does outside of Rivendell, and to quote LOTR, "His house [Elrond's] was perfect, whether you liked food, or sleep, or work, or story-telling, or singing, or just sitting and thinking best, or a pleasant mixture of them all. Evil things did not come into that valley." 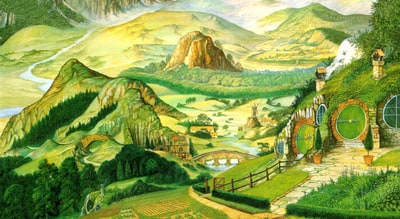 So much can be said of The Shire. I won't go so far as to say I am a hobbit (I consider myself more of an elf, all things considered), but there is definitely something special about the Shire--a sense of peace and contentment with life and the day-to-day goings-on. As Gandalf said, "there is power, too, of another kind in the Shire." I would say there is a certain beautiful, literally and spiritually, in a place like the Shire.

Mithlond, or the Grey Havens

Of all the places in Middle-earth that still exists, this is one of the few that took part in the great wars with Morgoth. It was the last stronghold of the elves before the return of the Valar and elven hosts from Valinor to throw down Morgoth and imprison him for good. It is home of Cirdan, the shipwright, and is the place of departure for the elves leaving Middle-earth for Valinor. 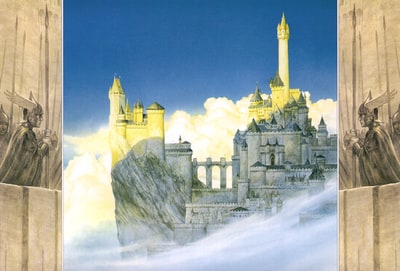 Minas Tirith, the Tower of Guard, became the capital of Gondor after Osgiliath fell into ruin. It was the site of a major victory for the free peoples of Middle-earth during the end of the third age. It is also sometimes known as the White City. It was hither that Gandalf repaired after helping to rescue Helm's Deep from the forces of Saruman. 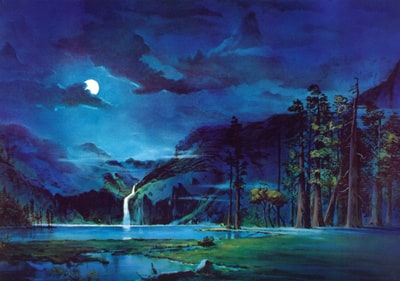 The dwelling place of Celeborn and Galadriel, wise and famed elven lords of old, Lothlorien is much like Rivendell, in that time does not pass as it does outside its borders. In fact, Lothlorien is from a time long ago, and does not age and decay as so much does now. If Rivendell is the remembrance of old times, Lothlorien is those times still present. The beauty and splendor of this place is beyond words.
Fraterlucis's rating: 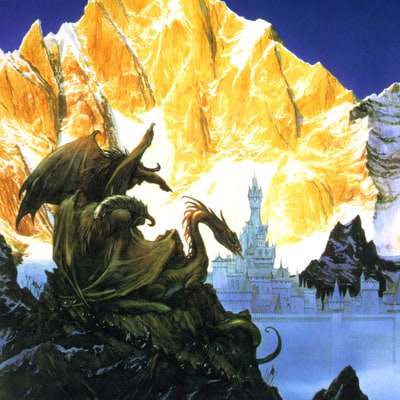 City of seven names, city of legend and greatest of the Elven cities in Middle-earth during the first age. It's fall was a great tragedy, as its splendor and beauty was only rivaled by the elven city Tirion in Valinor. The beauty, to me, is only surpassed by its tales of valor and wisdom, the lessons taught by its fall, and its smithing and crafting lore. Biblo and Gandalf's swords come from this famous city, as did Thorin Oakenshield's sword. 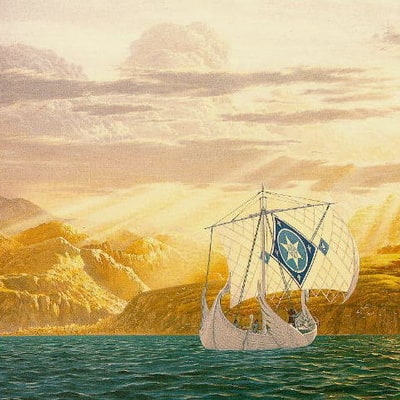 The land of Valinor holds much beauty, from the endless seas to the west, wherein the world ends and the doors of night exist, to the beauty of the three kindred elven dwellings, the Noldor, the Teleri, and the Vanyar. It is also home of Valimar, home of the Valar and Maiar, as well as the two trees, Telperion and Laurelin, the silver and gold trees that gave light to the world before the sun. 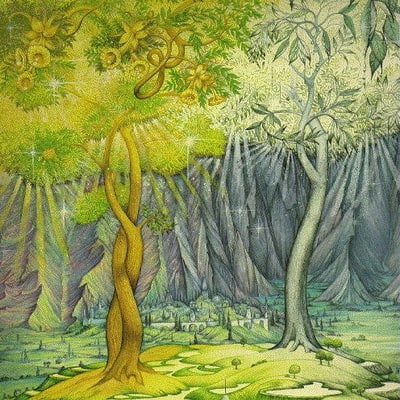 The two trees, Telperion and Laurelin, gave light to the world before the creation of the sun and moon. They waxed and waned at their own intervals and only on occasion did this waxing coincide. Their light is held now only in the silmarils created by Feanor, son of Finwe, high king of the Noldor.
Fraterlucis's rating: 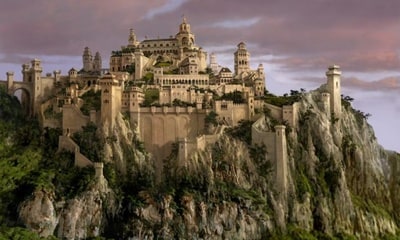 The capital of Narnia, ruled at one point by Peter, Susan, Edmund, and Lucy Pevensie. It was usurped at one time by the White Witch, and was home to the four Pevensie children as they ruled during the golden age of Narnia, a time of peace and plenty.

Island of the Star, Ramandu 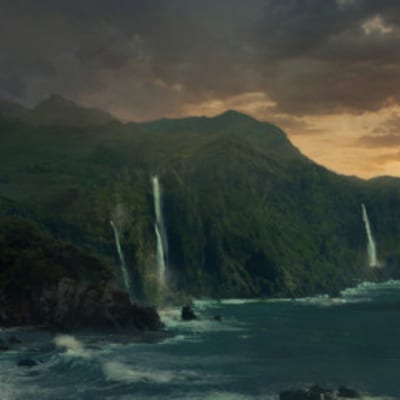 From my favorite Narnian book, Voyage of the Dawn Treader (not to be confused with the poor movie version), the Island of the Star is home to Ramandu, a fallen star, and a place of peace and beauty where one can become lost to the world. Unlike what happens in the movie, there is no battle, no attack, and the difficult decision is rather to leave someone behind at world's end to awaken the last three lost lords of Narnia.

The Realm of Faerie 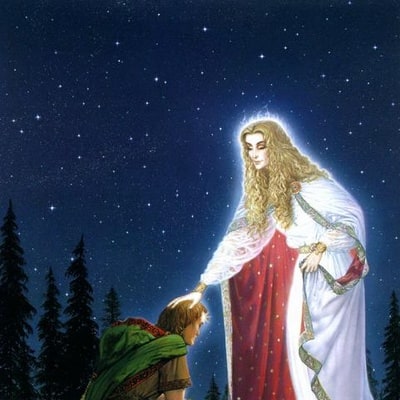 Smith stands before the Queen of Faerie, after many long and perilous journeys into the realm. He has seen many wonders and many dangers in his journeys, and on this occasion, was gifted to stand in the presence of the Queen. Incidentally, he has always known the King of Faerie, who resided in our own realm in his tiny hamlet of Wootton Major.
Fraterlucis's rating: 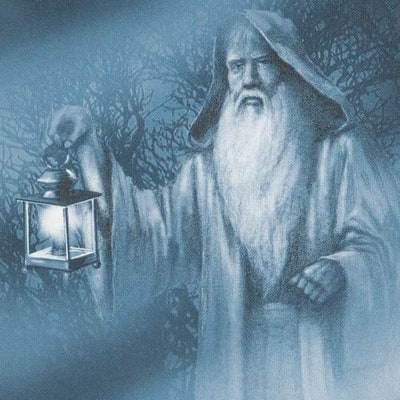 Of all the legends and places in the Four Lands of the Shannara series, of all the figures, this garden and the King of the Silver River are the ones that intrigue me the most. He is an enigmatic character, whom we only learn about throughout the entire series small bits and pieces at a time. His garden is described beautifully, and inspires me to seek it out, if he should allow me permission to visit his realm. 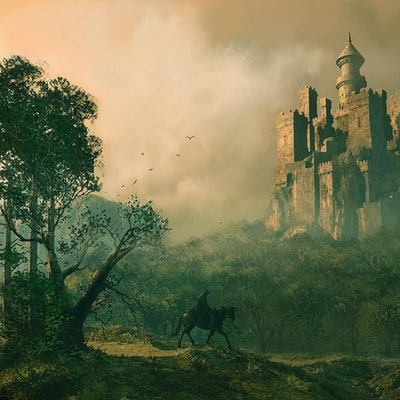 Home of the various councils of druids, and possessing a life of its own, there is a mystique about this place. It does possess a beauty of its own, but it is also the character of the fortress itself that intrigues me, and makes me want to visit the home of so many famous figures in Shannara.
Fraterlucis's rating:

In spite of ending in the middle of the series with disappointment, there are a few locations I'd enjoy visiting from this series. So, it is included for those alone.

0
A Game of Thrones (A Song of Ice and Fire, Book 1)... - George R.R. Martin
While I had lost interest in the series by the end of book three (having lost any interest in the surviving characters by that point), there is still a place or two from this series I would love to visit. 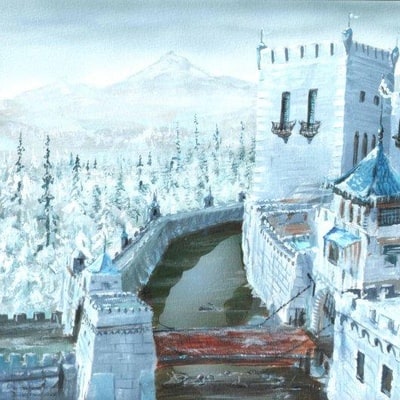 Of all the places in the series, Winterfell is the place I would most love to visit. It is a strong place, an ancient place, home of honor and integrity so lacking in many of the other and southern cities and fortresses. It is also a hard place and has a certain mystique about it. Given the character of the fortress, and the character of its people, it would be my main stop in Westeros.
Fraterlucis's rating: 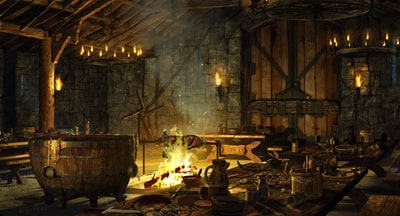 The mead hall of Hrothgar in the epic poem Beowulf, it is legendary for its rugged magnificence, the epitome of the heroic age. It is also the site of Grendel's attacks and the triumph of Beowulf over Grendel. Being one of my favorite epics, visiting the center of the tale would be high up on my list of places to see, if it were possible anyway.
Fraterlucis's rating: 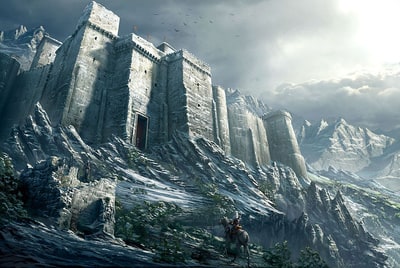 Home of the Aesir (Norse gods), is the heart of the Poetic Edda and the struggle of the Norse gods to fend off ultimate defeat. Valhalla lies within Asgard, and it is from Asgard that the Aesir and human allies will issue during the final battle for Midgard.
Fraterlucis's rating:

It has been quite a while since I've read this series, so I will have to re-read it to locate all the places I would like to visit here. One that I remember standing out is the Island of Roke where Ged travels to learn about make. 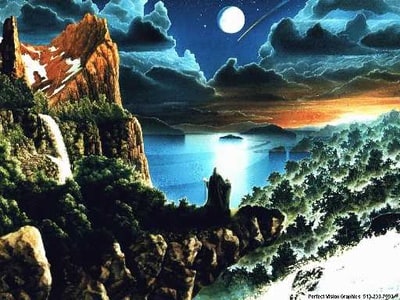 This is a list of imaginary or mythological places I would love to visit. As you can imagine, this is often places from fantasy or science fiction, but it also includes some places referenced in faery-tales or mythology. I will likely expand and add to this list, but this is a beginning. This list is limited to places in print, and excludes those originating in video games. For those, see my list Imaginary Places to Visit -- A Wishlist (Games)

Music my Mom likes by Sndi

Demons in the Cinema by xolmis

DS and 3DS Games by Fraterlucis

I, Q -- Q Episodes Ranked Best to Worst by Fraterlucis