50 places you must see being in Poland (part 3) 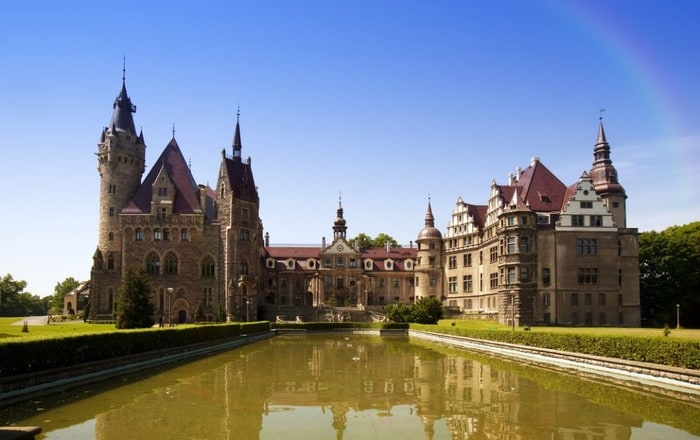 The castle in Moszna is one of the best known monuments in the western part of Upper Silesia.
The central part of the castle is an old baroque palace which was partially destroyed by fire on the night of April 2, 1896 and was reconstructed in the same year in its original form. The eastern Neogothic-styled wing of the building was built by 1900, along with an adjacent orangery. In 1912-1914, the western wing was built in the Neorenaissance style. The architectural form of the castle contains a wide variety of styles, thus it can be generally defined as eclectic. The height of the building, as well as its numerous turrets and spires, give the impression of verticalism. The whole castle has exactly ninety-nine turrets. Inside, it contains 365 rooms with a total floorage of 7,000 sq. m. 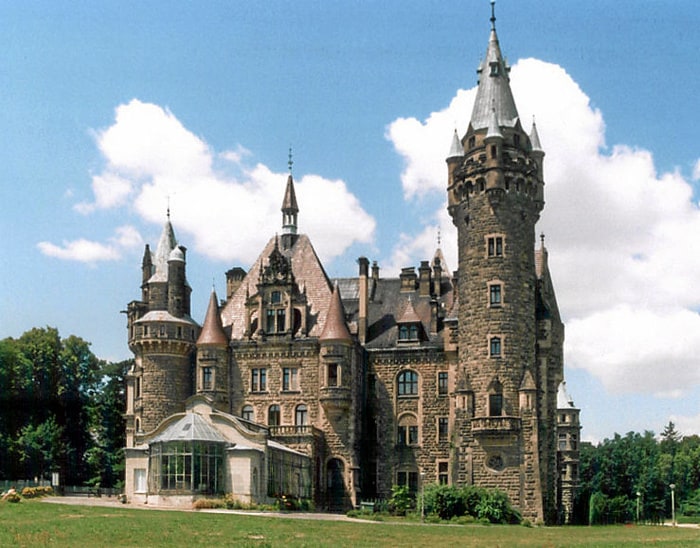 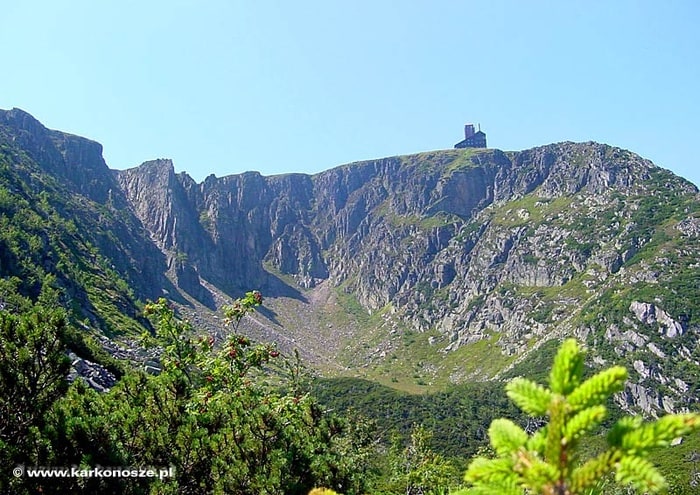 Śnieżne Kotły (1,175 m (3,855 ft), literally Snowy Pits, Snowy Cirque) are two glacial cirques in the western Krkonoše mountains (Giant Mountains), situated in the Karkonosze National Park on the Polish side of the border. They are a unique example of the alpine landscape in the area and have been a nature reserve since 1933.
It is possible to climb the cirque walls, though climbing is permitted only in January and February and dangerous; since World War II there has been ten fatal accidents. Hiking is possible; the Main Sudety Trail as well as the Polish - Czech Friendship Trail run along the upper ridge of the cirques, close to the abyss. 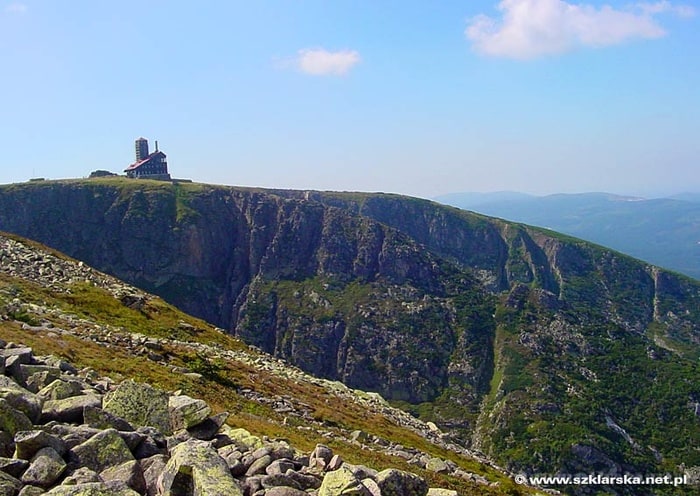 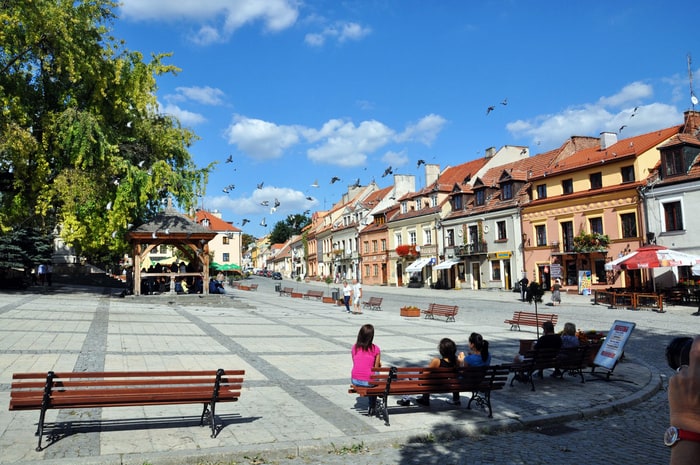 Sandomierz is picturesquely situated on seven hills above the Vistula River. This is one of the oldest Polish cities. There are over one hundred monuments that bear testimony thousand-year history of the city and soak up the unique atmosphere of charming streets and alleys of Sandomierz. 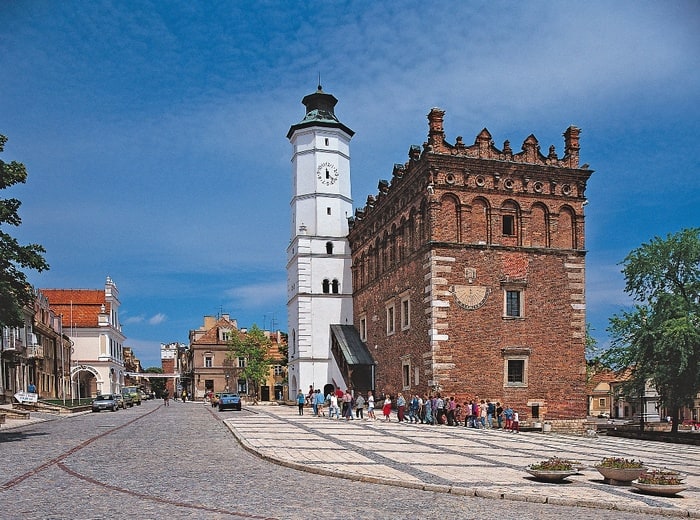 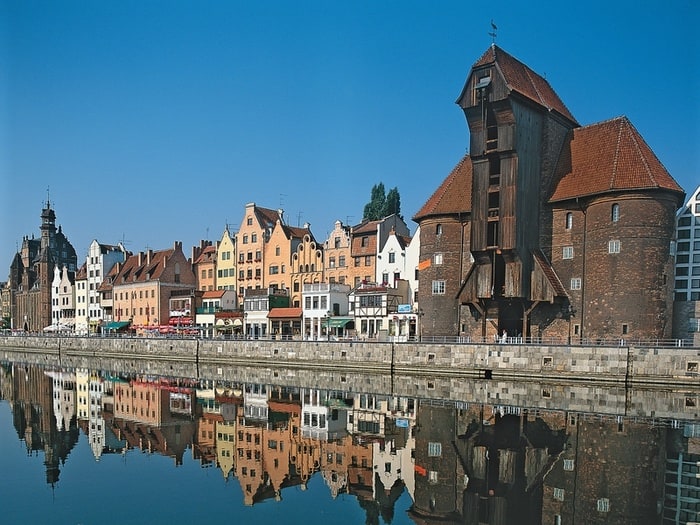 Gdańsk is one of the most beautiful cities in Poland. It is a cluster of architectural monuments. In Gdansk is among others the largest medieval church of brick in Europe - Basilica of the Assumption of the Blessed Virgin Mary. 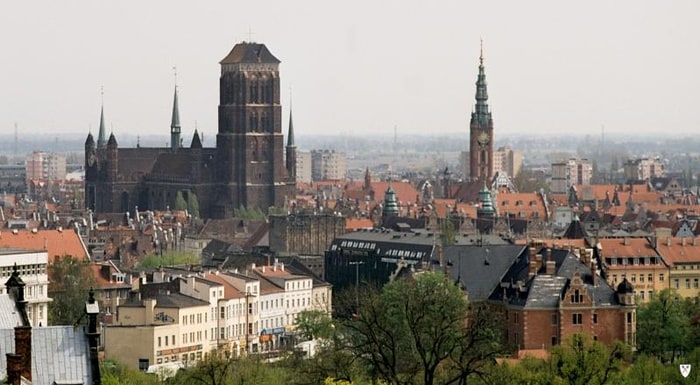 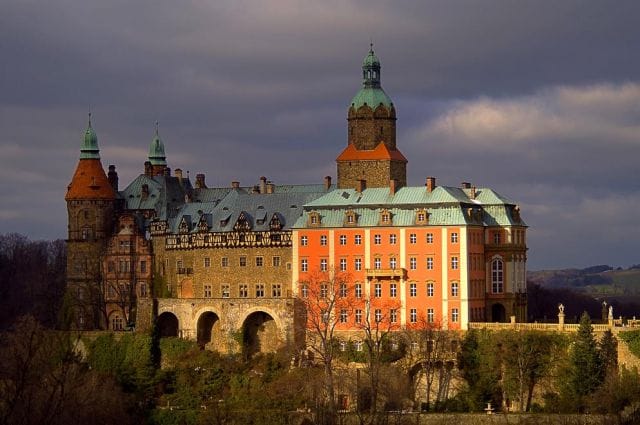 Książ is a castle in Silesia, Poland in Wałbrzych. It was built in 1288-1292 under Bolko I the Strict. It lies within a protected area called Książ Landscape Park.
This is one of the most intriguing castles in Poland. There is a lift leading to the mysterious underworld of time presence there Nazis who owned in the castle quarters of their authorities. Today you can admire the impressive palace, some of its parts, terraces and palm house. Castle is surrounded by a landscaped park. 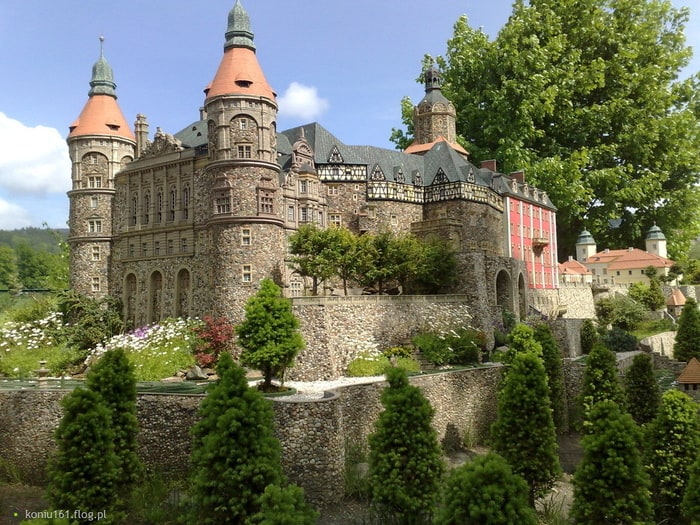 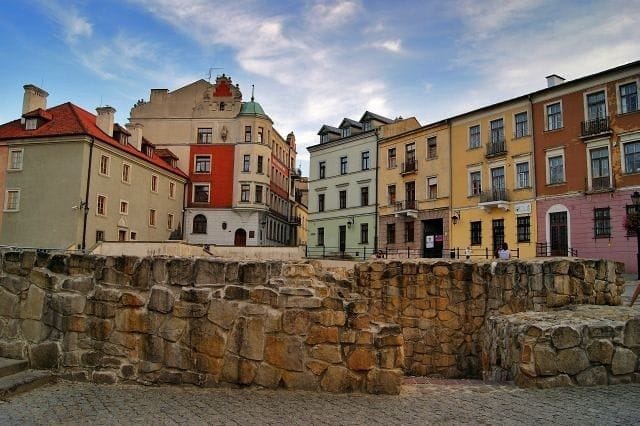 Lublin is a very nice town. Lublin's Old Town has been completely renovated, offers many valuable and beautiful monuments. Lublin Castle is worth seeing, as well as approximately 300-meter tourist route that runs under the buildings of the Old Town. 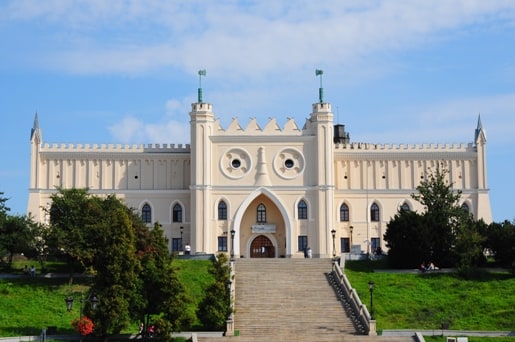 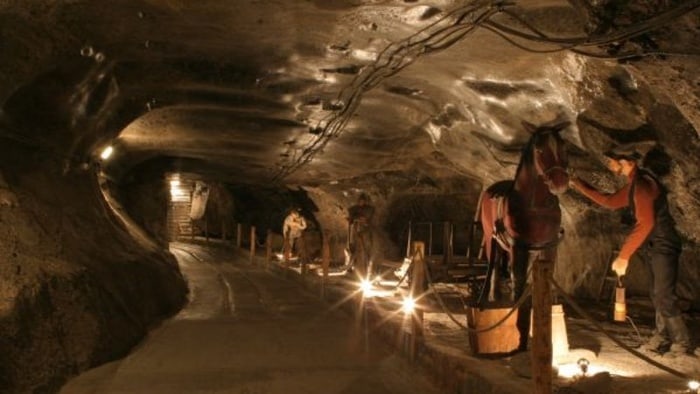 The Wieliczka Salt Mine located in the town of Wieliczka in southern Poland, lies within the Kraków metropolitan area. The mine, built in the 13th century, produced table salt continuously until 2007, as one of the world's oldest salt mines still in operation. From its beginning and throughout its existence, the Royal mine was run by the Żupy krakowskie Salt Mines. Commercial mining was discontinued in 1996 due to low salt prices and mine flooding.
The mine's attractions include dozens of statues, three chapels and an entire cathedral that has been carved out of the rock salt by the miners. The oldest sculptures are augmented by the new carvings by contemporary artists. About 1.2 million people visit the Wieliczka Salt Mine annually.
The Wieliczka mine is often referred to as "the Underground Salt Cathedral of Poland." In 1978 it was placed on the original UNESCO list of the World Heritage Sites. Even the crystals of the chandeliers are made from rock salt that has been dissolved and reconstituted to achieve a clear, glass-like appearance. It also houses a private rehabilitation and wellness complex. Also the Wieliczka was one of World 12 Tourism rankings.
There is a chapel, and a reception room that is used for private functions, including weddings. A chamber has walls carved by miners to resemble wood, as in wooden churches built in early centuries.

A wooden staircase with 378 steps provides access to the mine's 64-meter (210-foot) level. A 3-kilometer (1.9-mile) tour features corridors, chapels, statues, and underground lake, 135 metres (443 ft) underground. An elevator returns visitors to the surface; the elevator holds 36 persons (nine per car) and takes some 30 seconds to make the trip. 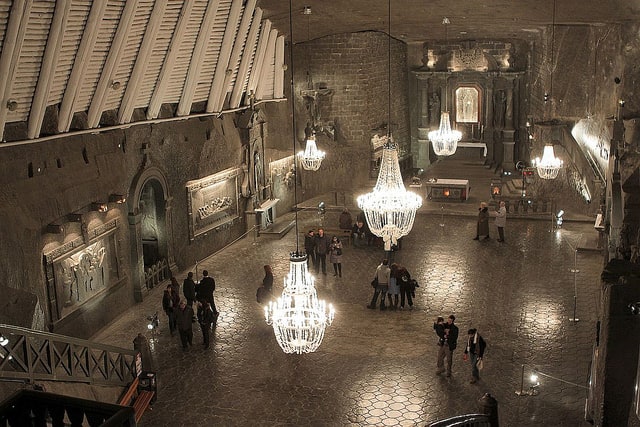 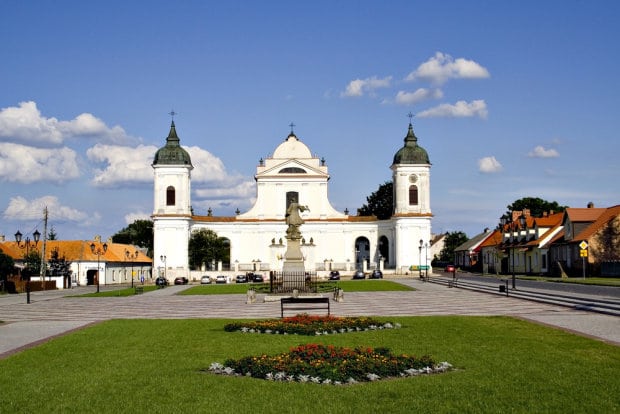 Tykocin is baroque pearl. The turbulent history of gently walked around the monuments of the city, so here is what to watch. Old tenement houses rub shoulders with wooden cottages and whitewashed, aristocratic mansions. Baroque synagogue in Tykocin is the second-largest synagogue in Poland. 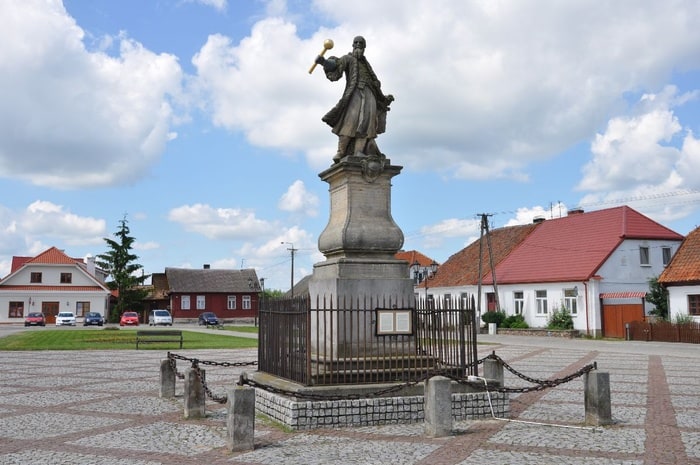 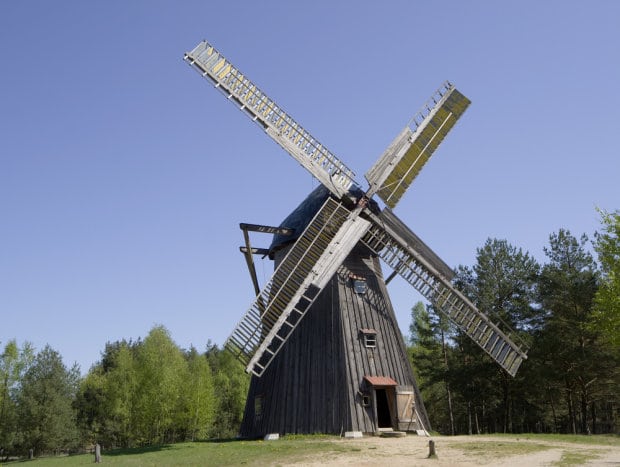 Worth a visit first founded on Polish territory heritage park - Kashubian Ethnographic Park in Wdzydze Kiszewskie. Today it is the Ethnographic Park, captivating beauty of the old huts embedded in the landscape. There are mansions, fishing huts and peasant huts, a smithy, a church, or even two windmills. 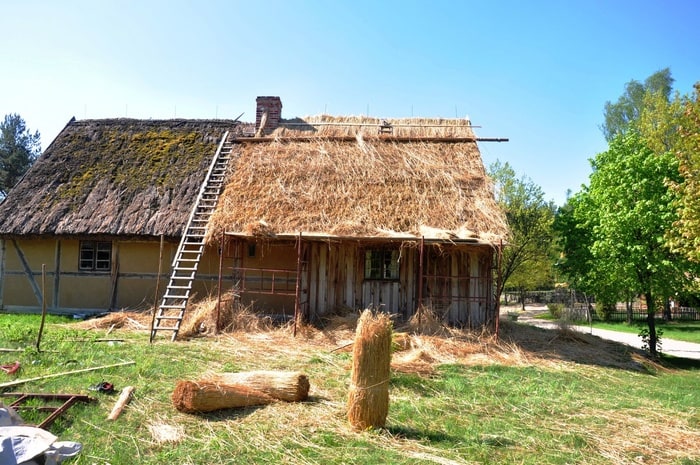 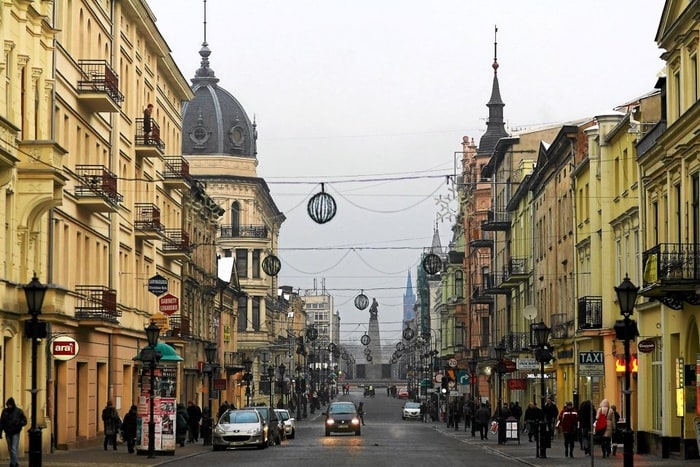 Łódź is an important cultural center in Poland, Piotrkowska Street is the most beautiful in the country. Worth seeing architecture of old factories and unusual contrasts of Łódź. 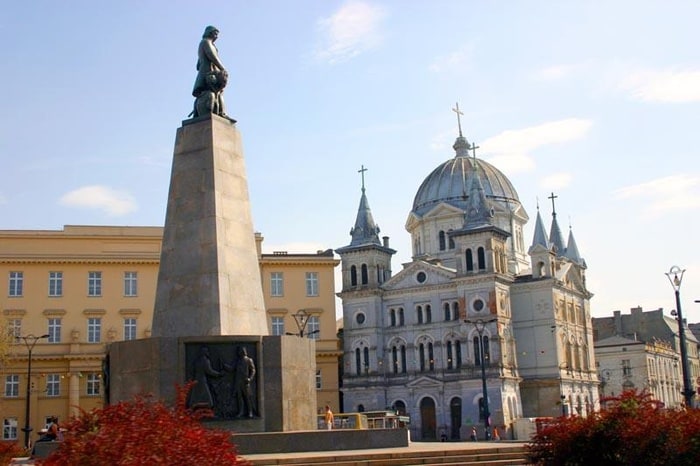 10 places in Poland, that are worth seeing.

62 votes
All about Poland (25 lists)
list by Villiana
Published 8 years, 8 months ago

Favorite Images of Lizards #1 by kathy

The Most Dangerous Roads In The World by Laín Coubert

All about Poland by Villiana

10 Things I Love About Christmas by Villiana