0
Vincent Van Gogh
On the morning of July 27, 1890, van Gogh went outdoors to paint, apparently bringing a loaded gun with him. He then attempted suicide by shooting himself in the chest, although the bullet failed to kill him. He died two days later in the presence of his brother, at the age of 37.

0
John William Godward
Over the course of his 40-year career, John Godward rarely deviated from painting beautiful women in robes. This style made him famous and he was often praised for depicting the rippling movement of classical clothing with incredible accuracy. But his paintings weren’t universal critical hits, with many dismissing his idealized and historically inaccurate portraits as “Victorians in togas.” His own family despised his choice of career and disowned him after he moved to Italy in 1912, destroying all photographs that reminded them of his existenceIn his old age, Godward produced fewer and fewer paintings as his health deteriorated. In December 1922, he took his own life, writing in his suicide note that the world was not big enough for him and Picasso. 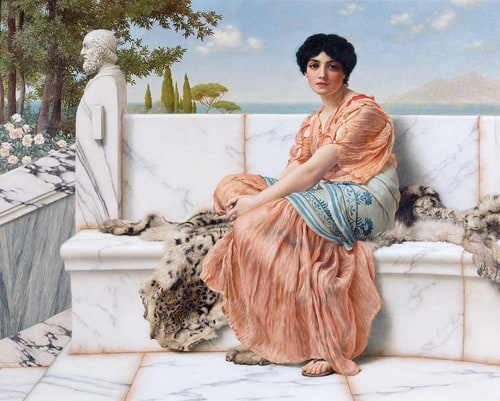 0
Jeanne Hébuterne
On 24 January 1920 Modigliani died. Hébuterne's family brought her to their home, but she threw herself out of the fifth-floor apartment window two days after Modigliani's death, killing herself and her unborn child.

Her family, who blamed her demise on Modigliani, interred her in the Cimetière de Bagneux. Nearly ten years later, at the request of Modigliani's brother, Emanuele, the Hébuterne family agreed to have her remains transferred to Père Lachaise Cemetery to rest beside Modigliani.

Her epitaph reads: "Devoted companion to the extreme sacrifice."

0
Richard Gerstl
Richard Gerstl produced arguably his best work while engaged in a scandalous secret affair affair with Mathilde, the wife of famous composer Arnold Schoenberg. During the affair, Gerstl painted multiple nudes of both himself and Mathilde. After being discovered together in “a compromising position,” the pair fled from Mathilde’s husband and continued their relationship. Unfortunately for Gerstl, Mathilde eventually left him and returned to Schoenberg “for the sake of the children.”Distraught by this, Gerstl would take his own life in November 1908, at the tender age of 25. To do the deed, he first stabbed himself in the torso. When this failed, he hung himself in front of a mirror in his new studio, surrounded by his paintings. 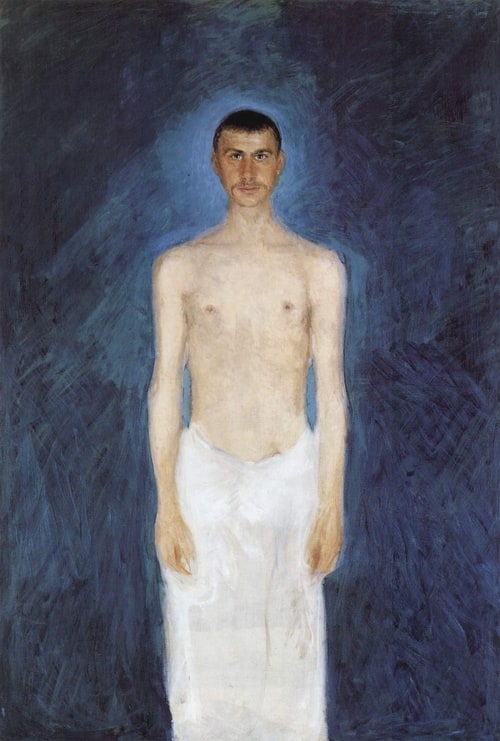 0
John Minton
Minton’s suicide was provoked by his depression and a loss of confidence after the rise of abstract art caused the popularity of his work to decline. Although the painting is clearly unfinished, there are indications that Minton didn’t intend to do any further work on it, telling a friend that he was worried about turning it “into another Johnny Minton painting. 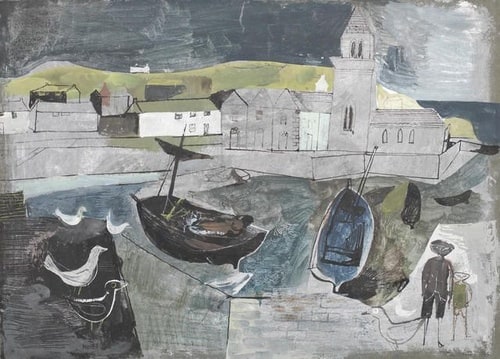 0
Nicolas de Staël
Nicolas de Stael was a prolific French abstract artist, producing thousands of paintings and drawings over the course of a relatively short career. In the last five months of his life alone, he produced 147 paintings. In March of that year, he committed suicide by jumping from a tall building in Antibes, leaving his final work, Le Concert, unfinished. He was 41 years old. 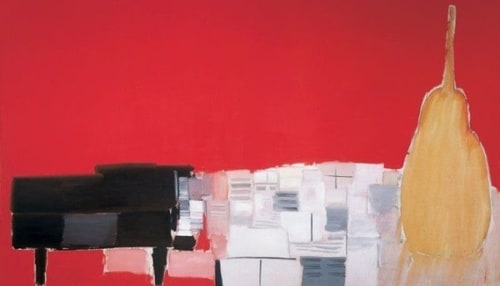 0
Arshile Gorky
Arshile Gorky was an abstract expressionist painter who predominantly worked using simple shapes and colors to express meaning. In the years leading up to his death, Gorky endured many unfortunate and tragic events. In 1946, a fire broke out at his studio and many of his finest paintings were burnt to ash. In the weeks following this, his health deteriorated and he was diagnosed with cancer. Shortly after that, he discovered that his wife Agnes had been cheating on him with another artist. The couple separated, and Agnes moved away with their two daughters.In 1947, Gorky produced numerous paintings, including Agony, The Plough And The Song, and The Limit And The Beginning, any of which might be said to have been his last work. Agony is perhaps the most interesting, since it can only be understood in relation to Gorky’s immense suffering shortly before his death. The blazing red colour, which Gorky seldom used prior to Agony, is most likely a reference to the fire that destroyed his studio. In 1948, Gorky’s tragic run of bad luck came to a devastating climax when he broke his neck in a car accident, paralyzing his painting arm. Unable to work, he committed suicide in his studio a month later. 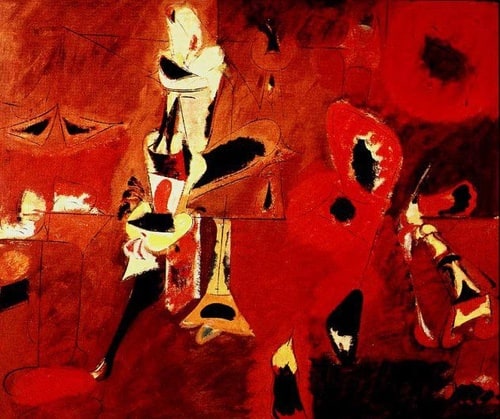 0
Jean Michel Basquiat
Jean-Michel Basquiat began his artistic career while in his teenage years, as a graffiti artist in Manhattan, before transitioning to painting later in life. His work quickly attracted widespread acclaim for its depth and composition and Basquiat was soon the toast of the art world. Unfortunately, the artist was also struggling with heroin addiction and died of a "speedball" overdose (essentially a mix of heroin and cocaine) when he was only 27. 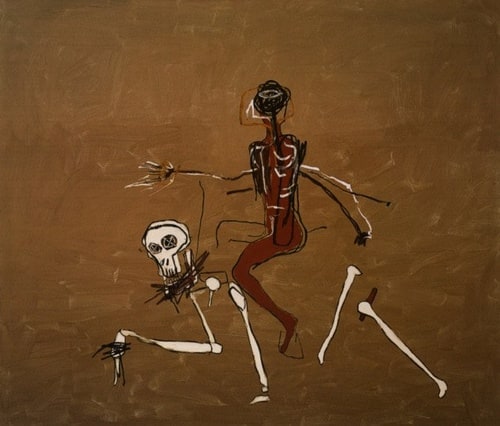 0
Mark Rothko
Mark Rothko’s reputation as an abstract artist largely rests on his famous paintings of vibrantly colored rectangles. These works were widely praised for their use of color to provoke emotional responses. Toward the end of his life, his paintings became more bland and desolate, most likely in an attempt to challenge his public reputation. His final series of works were “the Black Paintings,” most of which consisted of a black and grey canvas with a horizontal divide and a thin white border. By Rothko’s own admission, the paintings are about death. Shortly after separating from his wife, and suffering from severe depression, Rothko committed suicide by slicing his wrists in his New York studio in 1970. 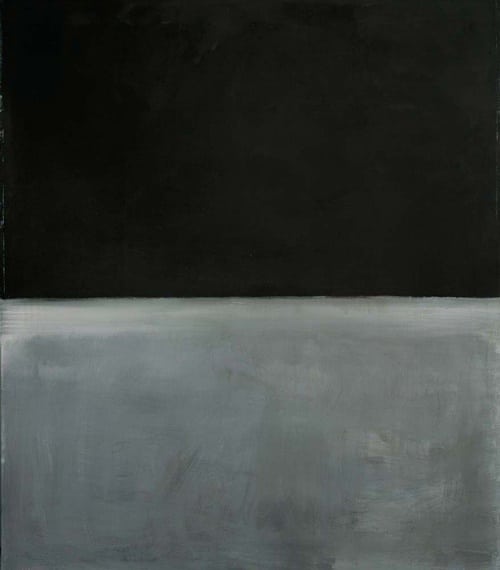 Favourite Songs Rage Against The Machine by Georgini

The weirder the better - My favorite oddities by jeffpsych

Movies watched in 2022 by Riikka

Suicide in Paintings by Nusch

Surrealist Movies of The 21st Century by Nusch