A wide-open beaver was a photograph of a woman not wearing underpants, and with her legs far apart, so that the mouth of her vagina could be seen. The expression was first used by news photographers, who often got to see up women’s skirts at accidents and sporting events and from underneath fire escapes and so on. They needed a code word to yell to other newsmen and friendly policemen and firemen and so on, to let them know what could be seen, in case they wanted to see it. The word was this: “Beaver!”
A beaver was actually a large rodent. It loved water, so it built dams. It looked like this:

The sort of beaver which excited news photographers so much looked like this:

This was where babies came from.

Dwayne’s bad chemicals made him take a loaded thirty-eight caliber revolver from under his pillow and stick it in his mouth. This was a tool whose only purpose was to make holes in human beings. It looked like this: 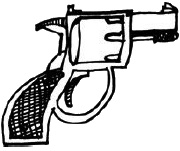 In Dwayne’s part of the planet, anybody who wanted one could get one down at his local hardware store. Policemen all had them. So did the criminals. So did the people caught in between. Criminals would point guns at people and say, “Give me all your money,” and the people usually would. And policemen would point their guns at criminals and say, “Stop” or whatever the situation called for, and the criminals usually would. Sometimes they wouldn’t. Sometimes a wife would get so mad at her husband that she would put a hole in him with a gun. Sometimes a husband would get so mad at his wife that he would put a hole in her. And so on.

In the same week Dwayne Hoover ran amok, a fourteen-year-old Midland City boy put holes in his mother and father because he didn’t want to show them the bad report card he had brought home. His lawyer planned to enter a plea of temporary insanity, which meant that at the time of the shooting the boy was unable to distinguish the difference between right and wrong.

Dwayne elected to shoot up one of his tiled bathrooms instead. He put chunks of lead through his toilet and a washbasin and a bathtub enclosure. There was a picture of a flamingo sandblasted on the glass of the bathtub enclosure. It looked like this: 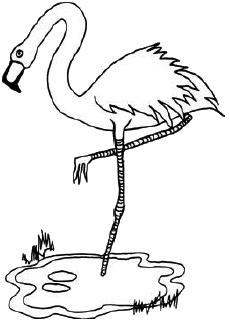 Dwayne shot the flamingo.
He snarled at his recollection of it afterwards. Here is what he snarled: “Dumb fucking bird.”

But there were thousands upon thousands of other people in the city who bought bad chemicals and ate them or sniffed them—or injected them into their veins with devices which looked like this:

Sometimes they even stuffed bad chemicals up their assholes. Their assholes looked like this:

People took such awful chances with chemicals and their bodies because they wanted the quality of their lives to improve. They lived in ugly places where there were only ugly things to do. They didn’t own doodley-squat, so they couldn’t improve their surroundings. So they did their best to make their insides beautiful instead.

The results had been catastrophic so far—suicide, theft, murder, and insanity and so on. But new chemicals were coming onto the market all the time. Twenty feet away from Trout there on Forty-second Street, a fourteen-year-old white boy lay unconscious in the doorway of a pornography store. He had swallowed a half pint of a new type of paint remover which had gone on sale for the first time only the day before. He had also swallowed two pills which were intended to prevent contagious abortion in cattle, which was called Bang’s disease.

Around the toilet seat was a band of paper like this, which he would have to remove before he used the toilet:

This loop of paper guaranteed Dwayne that he need have no fear that corkscrew-shaped little animals would crawl up his asshole and eat up his wiring. That was one less worry for Dwayne.

Dwayne pulled open his floor-to-ceiling draperies for a moment. He saw the sign which announced the presence of the Inn to weary travelers on the Interstate. Here is what it looked like: 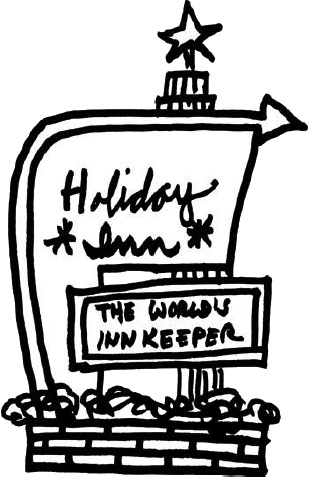 He closed his draperies. He adjusted the heating and ventilating system. He slept like a lamb.

A lamb was a young animal which was legendary for sleeping well on the planet Earth. It looked like this: 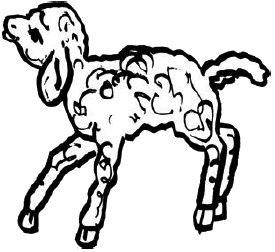 They stopped at a diner. Here is what the sign in front of the diner said: 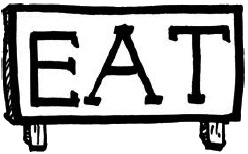 Then he saw the most unbelievable thing of all: His sales manager, Harry LeSabre, came toward him leeringly, wearing a lettuce-green leotard, straw sandals, a grass skirt, and a pink T-shirt which looked like this: 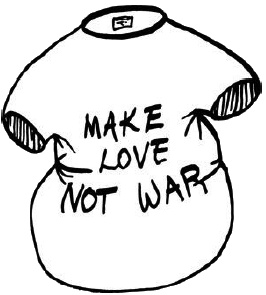 A pyramid was a sort of huge stone tomb which Egyptians had built thousands and thousands of years before. The Egyptians didn’t build them anymore. The tombs looked like this, and tourists would come from far away to gaze at them: 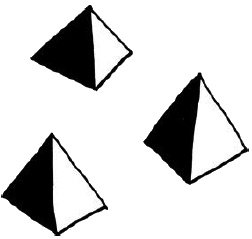 Choo-choo trains and steamboats and factories had whistles which were blown by steam when Dwayne Hoover and Kilgore Trout and I were boys— when our fathers were boys, when our grandfathers were boys. The whistles looked like this:

Steam from water boiled by burning coal was sent raging through the whistles, which made harshly beautiful laments, as though they were the voice boxes of mating or dying dinosaurs—cries such as woooooooo-uh, wooooo-uh, and torrrrrrrrrrrrrrrrrrrrrrrrrrrrnnnnnnnnnnnn, and so on.

A dinosaur was a reptile as big as a choo-choo train. It looked like this: 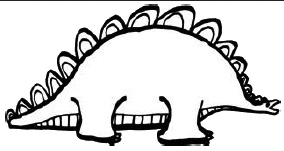 It had two brains, one for its front end and one for its rear end. It was extinct. Both brains combined were smaller than a pea. A pea was a legume which looked like this:

From Breakfast of Champions. The films are just placeholders, ignore them. Also, rather minor spoilers from the book if you haven't read it.

Antihero Is An Understatement by spiegel

Idiot box watchings for 2012 by the giraffe

The AFI Lists by AFIoscar

Things I love about films by VierasTalo

< 100: Overlooked, Intriguing or Boombastic! by VierasTalo