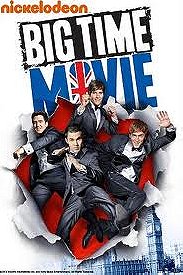 The movie starts after the intro of the cast and crew when Kendall, James, Carlos, and Logan are on their plane ride to London, their first stop for their tour. It also so happens that Gustavo, Kelly, Katie, and Mrs. Knight come with them aboard on the plane. Still on the plane for a long time, Carlos meanwhile has a dream about Big Time Rush being secret spy agents, saving the world from a white-coloured suit tuxedo guy, and also including rescuing a Princess from a Castle and a lot more things that Carlos dreams about. Carlos ends up waking up and explaining to Kendall, James, and Logan about his spy dream, and the boys don't seem to believe in the dream.

The boys soon look at the window, and happen to find themselves finally landing in London, with Gustavo, Kelly, Katie, and Mrs. Knight. The 8 of them soon arrive at their Hotel, and start wandering all around. From the front desk to reading maps, James, Carlos, and Logan soon realize and notice that Kendall doesn't have his usual backpack from before. They notice that Kendall's backpack is a girly backpack, which they try to give a hint about it to him, but Kendall just thinks they're teasing him that his bag is girly.

While Katie and Mrs. Knight are somewhere else away from the boys, and Gustavo and Kelly, The boys, Gustavo, and Kelly find their Hotel suite and start jumping on their beds from big excitement. Gustavo and Kelly, on the other hand just warns them not to get into trouble in London, and to first of all out of all things, not to jump on their beds. Gustavo and Kelly leave the boys in their suite for a while, while the boys are doing things in their suite. Kendall then realizes his bag is another person's bag, even actually especially a girl's bag, when he puts the bag down on his bed. He opens the bag to see what is inside, and happens to be a beetle shaped gravitational device, which Kendall, James, Carlos, and Logan are scared by it. They open the gravitational device, which the beetle device glows green with the flaps open, while the guys find themselves floating in the air!

They close the device, when a girl crashes through their suite window who fights while the guys are just standing there, and later introduces herself as spy agent Penny Lane, who claims the backpack including the gravitational device kinda belonged to her. They soon become quite friends with her, which James develops a crush on her which he wants to be more than friends with Penny when Penny doesn't want to.

They, by Penny's commands are that Big Time Rush will be part in help of the mission, and actually in charge of the backpack with the gravitational device in it. They flee to Chinatown, but nothing really works. They finally start off as they join Penny in a black spy van with an AI, while Gustavo and Kelly worry about what the boys are up to like causing trouble while they are away from them. Meanwhile, while Gustavo and Kelly are still worrying about the boys, Kendall, James, and Logan seem to notice a bit that Carlos dream is coming true in real life, but still don't really believe in it while some of it is happening. After quite of some crazy action in the mission, Penny explains a white tux guy named Atticus Moon is trying to somehow take over the world using the Beetle, which the 3 are shocked to hear that Carlos' dream is actually continuing. Penny sets up a meeting in Hyde Park with Moon to give the Beetle back to Moon in order to get Penny's dad back, where the boys are having their soundcheck. Suddenly, the boys are in a driving chase.

Meanwhile, Gustavo and Kelly are being mad at for the boys being late for their soundcheck rehearsal, and end up doing their best to find them. Meanwhile for the storyline of Katie and Mrs. Knight, they were having their pastime with the Duke Of Bath which Katie really wants her mom to fall in love with over the pastime so Katie can become a princess like in her dream. After the Headquarters find a video clip of Gustavo and Kelly claiming "BTR will take over the world at their concert", they believe Gustavo and Kelly actually want to take over the world in a bad, evil, way which they're not. They kidnap Gustavo and Kelly and trap them in a room in their headquarters, where they torture the 2 of them by getting an Asian guy with a really bad singing voice to sing Big Time Rush Karaoke to them.

While everyone's busy, (Gustavo and Kelly being tortured at the headquarters) and (Katie and Mrs. Knight having pastime with the Duke Of Bath), the guys, including Penny disguise themselves so they could get past Moon's crew through the park so they could carefully get to the soundcheck. Kendall is a sports guy, James is disguised as a hippie, Carlos is a punky-like rockstar in black leather clothing, and Logan is in a dog mascot while Penny is disguised as a typical ordinary school girl/student. They don't really get to the park safely-they get into problems, like being chased by fans, being chased by a dog, and more. After the boys finish their soundcheck, they meet up with Penny backstage and rush to the field where Moon's helicopter landed. However only the boys see Moon, Penny Wants to assault Moon to make sure he does not win. However, she is foiled by one of Moon's henchmen but they manage to escape to an underground-base to get weapons but Penny's dad is accidentally knocked out by Logan with a dart.

At the hotel, Mrs. Knight is getting ready for her dinner with the Duke,Katie finds out that the Duke of Bath is actually a toilet salesman by seeing one of his commercials. When she walks out of her room to the hallway, Atticus Moon is there to kidnap her. He then contacts the BTR gang saying that BTR won't see Katie again if they don't bring him the Beetle in 1 hour. Meanwhile at the MI6 HQ, they find out that Gustavo was only using the phrase metaphorically and drop them off at a sheep field because they don't want a public scandal on their hands. Meanwhile, Moon's henchmen manage to steal the Beetle back. While all seems lost, the guys decide to assault Moon's castle like they did in Carlos's dream.

The MI6 Agency figure out Moon's plan and try to stop him but can't because Moon is jamming communication signals so no one gets in his way. After the boys manage to defeat Moon and rescue Katie, the MI6 agents arrive at the scene to give the boys a ride to Hyde Park and the boys finally kick off their world tour.
... (more) (less)
Release date: 10 March 2012
Tags: Turd (1)
My tags:

tmgx added this to have watched list 4 years, 4 months ago