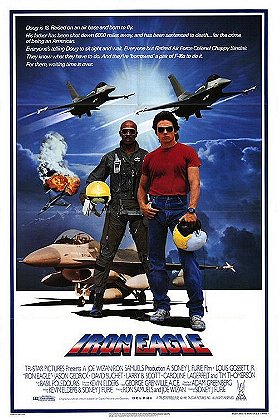 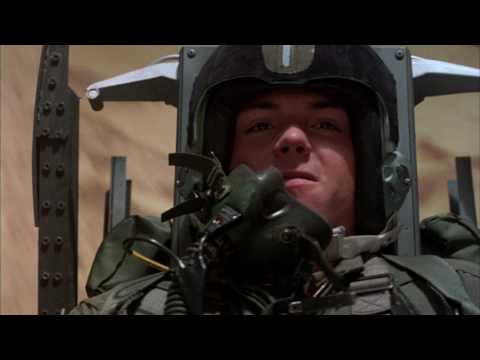 Seeing that the U.S. government will do nothing to save his father's life, Doug decides to take matters into his own hands and come up with his own rescue mission. He requests the help of Col. Charles "Chappy" Sinclair (Louis Gossett, Jr.), a Vietnam veteran pilot currently in the Air Force Reserve, who has known Col. Masters for only a couple of years. Chappy is skeptical at first, but Doug convinces him that with his friends, he has full access to the airbase's intelligence and resources and he can give him an F-16 fighter for the mission. To Doug's surprise, he learns that Chappy had already begun planning the rescue operation himself after he learned the outcome of Col. Masters' trial. The combined efforts of Chappy and Doug's team result in a meticulously planned mission and the procurement of two heavily armed F-16 planes, with Doug flying the second unit.

On the day of Col. Masters' execution, Doug and Chappy fly their planes to the Mediterranean Sea and cross into the enemy state's airspace. In the ensuing battle, they take out three MiG-23 fighters and destroy an airfield, but Chappy's plane is damaged by an anti-aircraft gun. He tells Doug to climb to a high altitude and play the tape he made him the night before, then his engine fails and Doug listens as Chappy's fighter goes down.

Chappy's recorded voice gives Doug encouragement and details that help him complete the mission and rescue his father. Making the enemy believe he is leading a squadron, Doug threatens the enemy state into releasing his father from prison and moving him to the base's northernmost runway for pickup. Before Doug lands his plane, Col. Masters is shot by an Arab sniper, causing Doug to destroy the airbase and engulf the runway with napalm to keep the army at bay while he lands and picks up his wounded father.

Just as they take off, Doug and his father encounter another group of MiGs led by Col. Akir Nakesh (David Suchet) - himself an ace pilot. The lone F-16 and Nakesh's MiG engage in a long dogfight until a missile from Doug finishes off Nakesh. Low on fuel and ammunition, the F-16 is being pursued by the other enemy MiGs when a squadron of U.S. Air Force F-16s appear, warding off the MiGs before escorting Doug and his father to Ramstein Air Base in Germany.

While Col. Masters is being treated for his wounds, Doug is reunited with Chappy, who had ejected from his plane and was picked up by a fishing trawler. The two are summoned by an Air Force judiciary panel for their reckless actions. Seeing that any form of punishment for the duo would expose an embarrassing lapse in Air Force security, the panel forgoes prosecution as long as Doug and Chappy never speak of their operation to anyone. In addition, Chappy convinces the panel to grant Doug admission to the Air Force Academy.

djprojexion added this to a list 3 months, 1 week ago

"I went on a bit of a tear with dollar 80s DVDs at another book sale. Iron Eagle has yet to be released on BR, so yeah it belongs in the collection."

caitsidhe13 added this to wanted list 4 months, 3 weeks ago

Agent Kermit D. Fonz added this to a list 1 year, 10 months ago

YAHEMMI added this to a list 2 years, 8 months ago
My DVD COLLECTION (7267 dvds items)

djprojexion added this to a list 2 years, 10 months ago
80s Movies I Need To Revisit (51 movies items)

shaky added this to have watched list 4 years ago

Gdog29 added this to have watched list 4 years, 1 month ago

The Eggman added this to have watched list 5 years, 5 months ago

Agent Kermit D. Fonz added this to a list 5 years, 6 months ago

"According to the DVD liner notes, the U.S. Air Force was going to consult on this film until they realized that a major part of the plot hinged on Doug and his friends hacking into the base computers, stealing equipment, etc. They didn't like the idea of the ease with which they had control of the base. This film was originally intended to be released in the summer of 1986, but the release was pushed up to January to avoid competition and confusion with Top Gun (1986)."

dhmagus added this to have watched list 5 years, 8 months ago