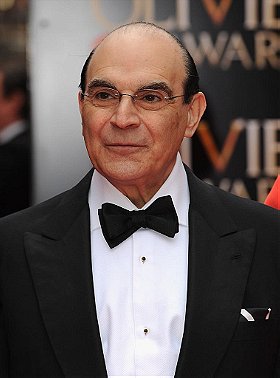 21 votes
Actors I have seen on Stage (29 items)
list by talia_sparkle
Published 10 years, 7 months ago

5 votes
Who Do You Think You Are? (108 items)
list by sonnylistal
Published 8 years, 5 months ago

In the 1970s Suchet also began to come into his own on British television. In classical tradition, his first television movie was A Tale of Two Cities (1980). His first cinema detective has been a Greek inspector in the Disney mystery-comedy Trenchcoat (1983), followed by a range of film roles that express the width of his acting qualities, such as a Middle Eastern terrorist in The Little Drummer Girl (1984), a Russian operative in The Falcon and the Snowman (1985), a French hunter in Harry and the Hendersons (1987), a Polish bishop in To Kill a Priest (1988) and Napoleon in in Sabotage! (2000).

Widely regarded as the one of greatest stage and screen actors both in his native Great Britain and internationally, David Suchet always offers staggering work full of generously euphoric delight, with a theatre course that includes memorable stunning incarnations such as the Shakespearean ones of Iago in "Othello", Tybalt in "Romeo and Juliet", Caliban in "The Tempest" and "Timon of Athens", as well as in roles such as George in "Who's Afraid of Virginia Woolf?" in 1996 and, from 1998 to 2001, as composer Salieri in "Amadeus", a mesmerizing performance for which he received a Tony nomination after its Broadway presentation. Long wed to former actress Sheila Ferris, the couple has a son and daughter. His older brother is BBC newscaster-turned-journalist John Suchet. ... (more) (less)
Tags: Poirot (3), Thriller (2), Crime (2), Hercule Poirot (2), Private Detective (1), Funny (1), Brilliant (1), English (1), London (1), Mistery (1), Actor (1), Charming (1), Belgian Character (1)
My tags:

My name is Nicole, please contact me via my email address (sgtnicole8@hotmail.com) i have something very important to share with you.

My name is Nicole, please contact me via my email address (sgtnicole8@hotmail.com) i have something very important to share with you.