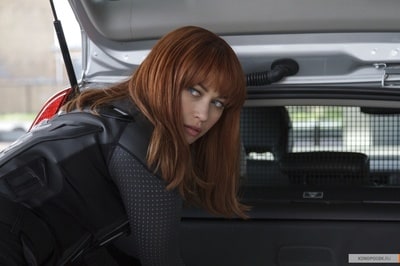 Notes: Even though Olga Kurylenko is extremely lovely, to be honest, she has spent at least half of her career showing up in some rather sh*tty movies and this one might be the worst of the bunch I have seen so far, I’m afraid. Indeed, not only the damned thing was terribly generic and tedious but most of it didn’t really work at all. For example, if it wasn’t necessarily a bad idea that these bank robbers would wear some high-tech suits, however, to give them some flashy coloured lights to recognize who was who was just lame and ridiculous. At least, it was neat to see Kurylenko playing a highly qualified robber but, to be honest, she wasn’t never really convincing. On top of that, even though the plot was seriously generic, some big chunks didn’t make much sense. For example, who the hell was this red-haired woman called Jessica?!? Why would an American senator hide a USB stick with sensitive information in a safe deposit box in South Africa? Was Kurylenko’s character actually hired to retrieve this precious USB stick? Coming back to this evil senator, it seems that Morgan Freeman apparently showed up for this movie as a favour for the director but I hope for him that he did get a nice pay check from this mess.
johanlefourbe's rating: 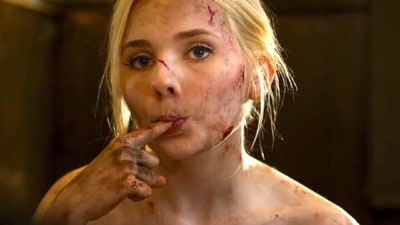 Notes: Well, eventually, it turned out to be really lame. Seriously, pretty much nothing worked with this movie. I mean, the story was boring and barely made sense, it was poorly directed and the performances were all weak. Concerning the story, what the hell was with this introduction? Indeed, you get to see Wes Bentley grooming some very young girl to become a killer but you never get the opportunity to learn what the deal was with this man and this girl. Then, they decide to kill a group of young psychopaths but it was the same thing. How did he find them? What did they have to do with his vengeance plan? It was all seriously idiotic and just completely random. Concerning the directing, I can imagine that they had a limited budget but the whole thing looked so cheap and unconvincing. Finally, concerning the acting, even though I have a weak spot for Abigail Breslin, her deep blue eyes were one of the very few redeeming features in this movie, she wasn’t convinving at all. I mean, she was actually an interesting choice to play this character but, to make it work, she should have had at least 6 months or even 1 full year of intense fighting training. Obviously, it didn’t happen here and, as a result, she honestly looked rather pathetic and there was no way in real life that she would beat any of these guys.
johanlefourbe's rating: 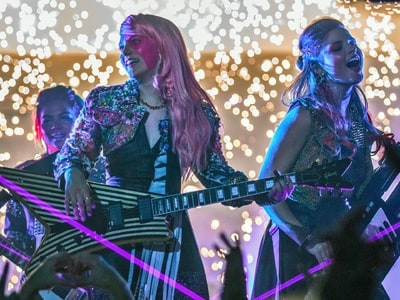 Notes: Well, the damned thing turned out completely misguided. First of all, who was actually the target audience for this movie? I actually watched the cartoon when I was a kid back in the 90's but it was hardly one of the most popular cartoons back then. Furthermore, they obviously aimed the whole thing towards the young girls but they obviously had never heard of this old TV show. To make it more modern, they added a social media angle which was just so annoying as you would get some YouTube videos popping randomly with absolutely no link with what was going on. Furthermore, the way the characters used social media themselves made the whole thing looked like a very fake reality-TV show. Finally, what was the point with this robot? Seriously, I thought it would add something to their performance but it didn't have any impact after all. At least, some of the songs were not bad but it was obviously not enough to make this movie mildly entertaining.
johanlefourbe's rating: 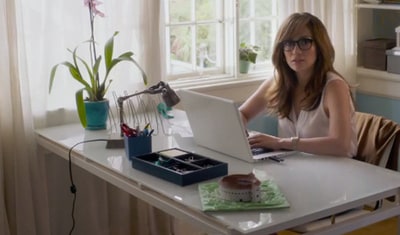 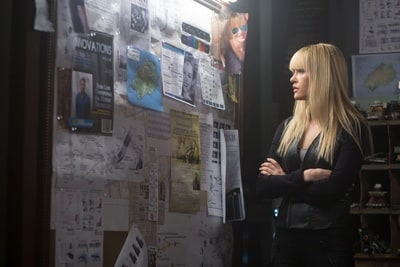 Notes: At least, this movie had a rather decent concept, which is more than what you usual get with such dreadful direct-to-DVD features starring Bruce Willis. Still, it doesn't mean that it was actually good though. Indeed, beside a concept which was pretty much a mix of 'Blade Runner' with 'The Purge', this movie had really nothing else to offer, at least, nothing good. First of all, the tech looked cheap and unconvincing but that was hardly the biggest issue with this flick. Indeed, there wasn't really a main character but about 3 or 4 really half-baked characters and, to make things worse, all the actors involved gave some rather weak performances. Finally, even though the concept did have some potential, it wasn't properly developed at all. Indeed, as displayed most brilliantly in 'Blade Runner', the most interesting thing about such a movie dealing with such advanced AI is the reflection on what makes us human and the mental struggle going through such a conscious artificial being. Well, obviously, this movie didn't care about this at all and, instead, they gave us some really generic and boring action scenes.
johanlefourbe's rating: 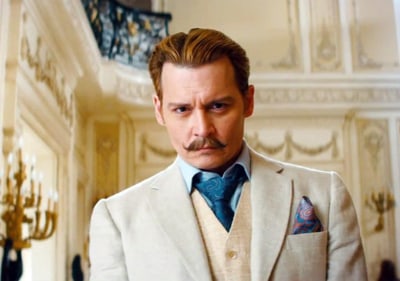 Notes: Dear God, what the hell happened to Johnny Depp?!? Last year, he came up with 'Transcendence' which sounded promising but turned out to be eventually easily the most disappointing movie released in 2014 but, this year, he managed to show up in something even more underwhelming. Sure, I heard it was poorly received and another flop for the once ruler of the box-office but I still wanted to check it out. Well, it was pretty pathetic, I'm afraid. I mean, where should I start? I guess, the biggest problem was that the story was just so generic and boring. Furthermore, the main character, supposedly an attempt from Depp at being funny, was most of the time rather annoying and barely entertaining. I mean, when the biggest joke is about the main character's mustache and you keep bringing it back desperately every 5 minutes, you should know you're in trouble.
johanlefourbe's rating: 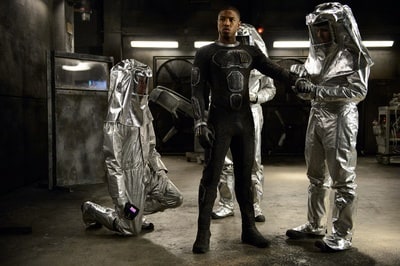 Notes: Was it really bad from the start or was it actually ruined by the studio? I guess we'll never know, apparently, Josh Trank's version was about 50 minutes longer but I have my doubts that something longer would have worked better. Anyway, there is no doubt that this cut didn't work at all. Indeed, even though it was just about 90 minutes long, it took them maybe 1 hour to introduce the characters, to get them to build their machine and finally to have them get their superpowers. Than, in the final act, it was just a big rush to have them face one of the most underdeveloped villains you'll ever see in a super-hero feature. In the mean time, you can start counting the number of plot-holes coming by. The most pathetic thing was probably the now infamous wig used by Kate Mara during the re-shoots. I mean, come on, even the color of this wig wasn't right. Above all, the whole thing was just so damned boring.
johanlefourbe's rating: 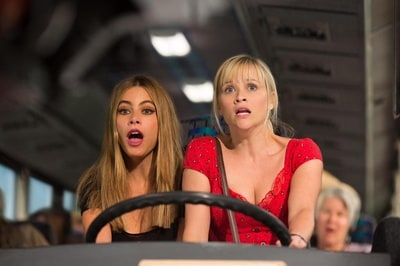 Notes: Basically, they went for some kind of lame female remake of 'Midnight Run', a classic from the 80's which I already barely enjoyed. To be honest, I don't think that anything really worked in this movie. First of all, I do believe that Witherspoon is a decent actress but she was actually rather weak here. I mean, the OCD aspect of her character was not so bad but she played one of the least convincing cops I have ever seen or maybe it was just that her character was rather poorly written. Eventually, I think it would have worked better if she would been a really great cop. Anyway, if eventually Sofia Vergara ends up being the one giving the better performance, you should know you are in trouble. I mean, she wasn't great at all but, at least, she was more convincing than Witherspoon. Should I also mentioned that none of the supporting characters was entertaining at all?
johanlefourbe's rating: 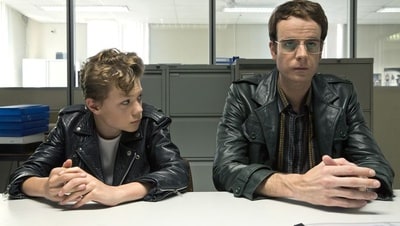 Notes: Well, I have to admit it , for once, they came up with a decent concept. On top of that, Thor Braun was quite charismatic and the kid did deliver a solid performance. However, even though the concept had some potential, it was still poorly developed, I'm afraid. The first mistake they made was that, Rikkie, the main character, was inspired by a fake gangster movie which was just so lame. Of course, it might have been trickier to get the rights to a real classic like 'Scarface', 'Goodfellas' or 'The Godfather' but it would have been so much cooler. Furthermore, it would have been quite interesting to see a kid being inspired by a real gangster flick. The other big issue was that the deception cooked up by the main character was never really convincing enough. Basically, he launched a rumor that his father is a mafia boss and everybody bought it right away. Concerning Henry van Loon, the guy is actually quite gifted but, to be honest, he never managed to make something really interesting or entertaining with his character. Anyway, even though the damned thing was rather harmless, it was still pretty weak.
johanlefourbe's rating:

Notes: Well, unfortunately, it turned out to be a massive disappointment and easily the weakest movie delivered by Michael Mann (I must admit that I still haven't watched 'The Keep' which has a very bad reputation). It's too bad because, with the current fear of cyber terrorism, the whole thing definitely had some potential but I was just amazed by how the whole thing was so poverly developed. Indeed, first of all, I have nothing against Chris Hemsworth, he is fine playing an Asgardian god or just an average hunk but he would be one of my last choices to play a great hacker. Then, you had this terrible idea of having the hacker released from prison to help the police. It's a very old gimmick that has been overused through the years and it didn’t add anything to the story. And why the hell was this guy, who was basically a technical consultant, involved during a police assault? Basically, from a very nice concept, they made something just terribly underwhelming.
johanlefourbe's rating:

These are the worst movies I have seen which came out in 2015.

My Indian lists by Kenji