So I got this device that allowed me to see recently-release movies whenever I can. I was initially hesitant on using but decided to give a shot by watching this surprisingly competent comedy. I will admit when I first saw the trailers for this movie. I wasn't exactly impressed by them but it did spark some of my interest. Certainly a lot more than some of Kevin Hart's other comedies he's done recently. So when I got to see it, I was rather impressed by the experience. This is a typical buddy cop movie with a rather convoluted plot but what really stole the show was an absolutely hilarious performance from Dwayne "The Rock" Johnson. I'm not the biggest fan of the Rock but he's charismatic enough for me to not mind him in whatever mediocre to abysmal movie I see him in. Here though, I was actually impressed by how hilarious his performance was as the super-buff but completely insane secret agent with a stalker-like attitude towards Kevin Hart's character. He really did make this movie work. Kevin Hart isn't that bad either. He playing it very safe, doing the same performance he's done in his other comedies. But this time he's playing much more of a straight man to the Rock's crazy antics and I feel that he works in that role. Now, not all of the comedy hits but I will admit I had my fair share of laughs throughout this film (the funniest bits were the bloopers at the end). I didn't like how the action scenes were edited and presented. They use shaky cam for those scenes, unfortunately. But overall, I was impressed with this movie as it managed to provide a good chunk of laughs, action, suspense, and surprisingly a little bit of heart. There are better comedies out there but if you're looking for a modern comedy to watch on an afternoon that could provide some belly laughs, I would certainly recommend this film.
Ricky49er's rating: 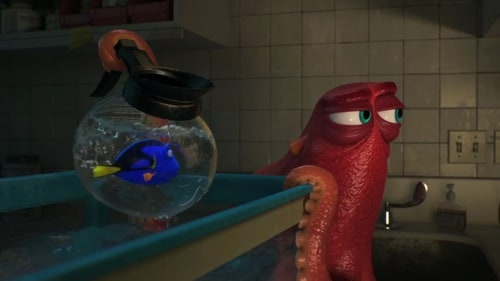 When I first heard that they were going to be making a sequel to Finding Nemo that was focuses on Dory, I'll admit I didn't have high hopes for this one. I expected that they were going to go the Cars 2 route of making an abysmal film focusing on a comedic sidekick character or go the Monsters University route and make a disappointing sequel/prequel of a beloved movie. Considering that Finding Nemo is one of my personal favorite Pixar movies, I was really hoping that this film wasn't a disappointment. After seeing this movie, I have to say... this film really blew my expectations out of the water (no pun intended). Pixar is finally back to making amazing sequels again just like the Toy Story films. There are some many great elements to this film. I love the aquarium environment the film takes place in. It is a refreshing change of pace from the large oceans of the last film. Also loved a lot of the characters including Hank the septapus, played excellently by Ed O'Neill. Also found the sea lions to make for some hilarious side-characters, reminding me of what they did with the seagulls in the previous movie. The kid who does the voice for Nemo was really good that I almost thought they got the guy who did the original Nemo to reprise his role despite the fact that they is WAY OLDER in real life. This film also has one of the greatest uses of "What A Wonderful World" I've ever seen. But honestly, the real star of the movie is Ellen DeGeneres as Dory. While she was hilarious in the last movie, this movie shows a lot more depth to her character playing off the unseen tragedy of her condition. You really get emotionally invested in Dory's journey just like you did Marlin's in the last movie. And just like in any good Pixar movie, this movie will bring out tears in your eyes from some heavy emotional scenes and intense situations. This film, along with Inside Out, is a return to form from Pixar after a rough patch of mediocre to awful films. Let's just say I'm really looking for to that Incredibles sequel.
Ricky49er's rating: 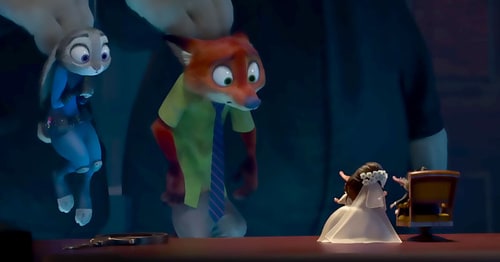 WOW! Disney is just hitting it out of the park again and again. I seriously believe that Disney is going through a Second Renaissance right now, starting with The Princess and the Frog. This film is nearly perfect from top to bottom. The characters are incredible, especially the main leads Nick Wilde and Judy Hopps, played excellently by Jason Bateman and Ginnifer Goodwin respectively. The plot has a lot of depth to it while exploring adult themes of discrimination that really hits at today's issues. But it is also incredibly hilarious and incredibly heartfelt and tear-jerkingly sad. This film is honestly better than some of the films from Disney's Renaissance. Seriously, this film is definitely worth the hype and praise it's been getting. Even more so than Frozen, in my earnest opinion.
Ricky49er's rating: 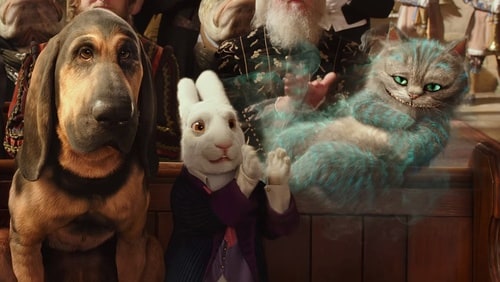 I remember watching the first Alice in Wonderland film directed by Tim Burton and finding the film incredibly boring. Even Burton's creative and demented visuals and designs didn't really save the film's bland action-adventure plot from being engaging. Now comes the sequel without Burton's direct involvement and I have to say I found this one slightly more enjoyable than the first one... but not by much as the same rating indicates. Because of the element of time travel, this makes for a more intriguing plot than the last one which had a typical fantasy scenario of slaying the giant dragon. But still the elements out of Wonderland are still just as boring, none of the characters are that interesting except weirdly enough the new character Time, played by Sacha Baron Cohen, who probably gave the best performance of the film. Overall, this film is just as underwhelming as the last one and would not really recommend it. There are way better Alice in Wonderland movies to check out.
Ricky49er's rating: 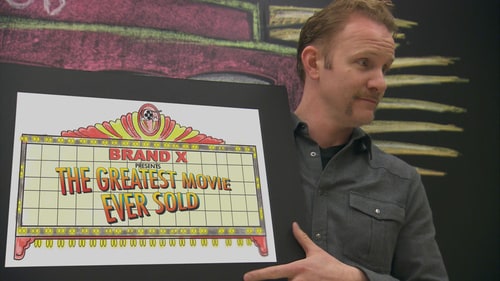 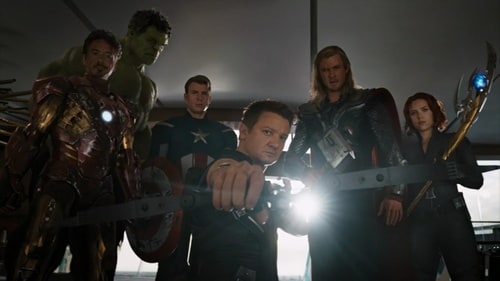 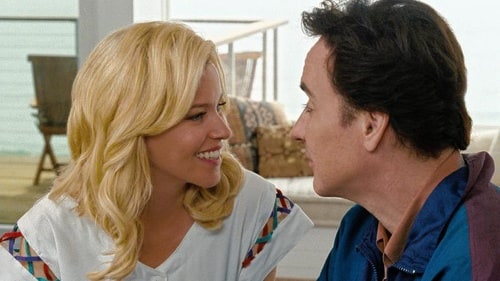 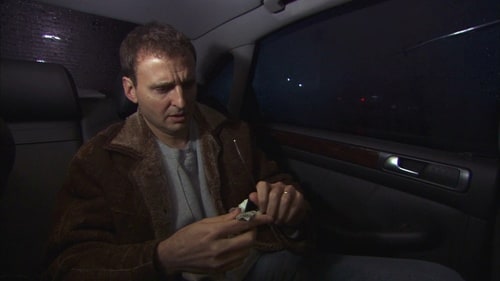 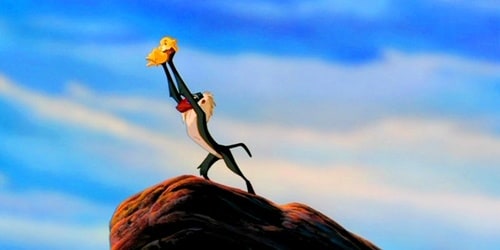 What can I say about this film hasn't been said already? This film is a classic for a reason. The animation is incredible. The songs created by Elton John and Tim Rice are awe-inspiring, epic, and iconic numbers. Songs like "Hakuna Matata", "Be Prepared", and "I Just Can't Wait To Be King" have been hummed in the minds of children now for decades. I simply surprised watching today how modern this movie still feels. Nothing feels dated about this production. A truly timeless and epic movie experience. I know Disney is planning another stupid live-action remake of this film but it's completely unnecessary since this film is as close to perfection as a movie can get.
Ricky49er's rating: 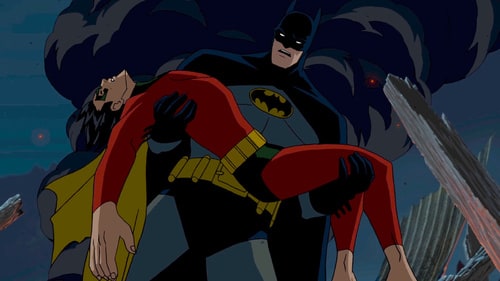 This is still one of the greatest Batman movies ever made. Not just animated movies but I'm including movies like Time Burton's Batman and The Dark Knight into the mix as well. Still enjoyable upon further rewatch. If you want to see my initial thoughts on the film, you can check this list here.
Ricky49er's rating:

When the first Kung Fu Panda film came out, I was happily surprised by how high-quality this film was in terms of its comedy, action, and storytelling. It felt like an awesome tribute to Chinese martial arts and its artistic landscapes while also being a strong character-based narrative focusing on Po's transformation from an eager but incompetent fanboy into the Dragon Warrior. Then, the sequel came along and managed to blow that phenomenal film out of the water, showing that Dreamworks has the potential to rival Pixar in creating quality sequels to beloved films. The film explores Po's character after becoming the Dragon Warrior where he faces off against a threat that poses a physical threat with his powerful weapon and a psychological threat with a connection to Po's long-forgotten past. The plot is phenomenal with hilarious humor, awe-inspiring action scenes, and an even more emotionally investing plot that can really bring one to tears. The voice cast is phenomenal. Jack Black really gets into Po's character in both his outrageous scenes and the more subtle emotional moments. He really makes the character his own. Angelina Jolie really brings out Tigress's character through her newfound "friendship" (I might see something more in that but that might just be wishful thinking) with Po. Gary Oldman is the highlight of this film, however, with his incredible performance as the villain Lord Shen. His performance allows him to be intimidating, funny, and sadistic when he once to be without losing his threatening position. This film will make you feel intimidated by a freaking peacock. The animation is incredible. Dreamworks is proving itself as a more even-leveled rival to Pixar with how fluid and impressive the animation can be, especially with their action sequences. The fight on the falling tower is one of the greatest animated action scenes I've ever seen. But it's not just CGI that is used in this film, there are a couple of scenes that switch to both shadow-puppetry and traditional animation. Both of these styles look incredible and work seamlessly into significant parts of the film. Overall, Kung Fu Panda 2 is a strong entry in Dreamworks's filmography and is definitely recommend for both kids and adults alike. Seriously, don't let the ridiculousness of the premise fool you. This is truly an incredible film.
Ricky49er's rating: 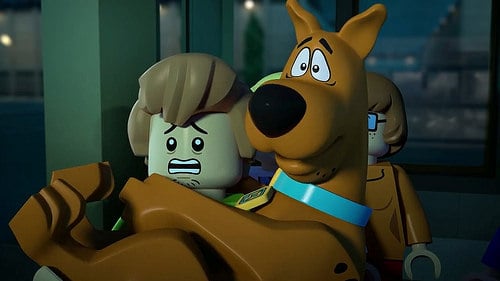 As a fan of Scooby-Doo since childhood, I have to say I found this film surprisingly enjoyable. I'm not sure how much being Legos really added to the humor of this film but I will admit it had me chuckling. This is honestly your typical Scooby-Doo story with the same kind of monsters, characters, and situations you'll expect just with the LEGO physics. That said it's not that bad but honestly, you can tell this was made for younger audiences. It was actually kind of cool to look into the credits and see Scott Menville voicing a character since he, at one point, voiced Shaggy as well. I mean if you have a kid and want to show them something inoffensive and fun, this will certainly work but the same can be said for a lot of Scooby-Doo films.
Ricky49er's rating:

Movies Watched in 2017 by Mackenzi

Film Journal - June 2016 by The Return Of Orlok

Coldest Large American Cities You Should Avoid... by Milena

Movies Viewed in 2017 by PvtCaboose91