10 Most Popular Suicide Spots on Earth 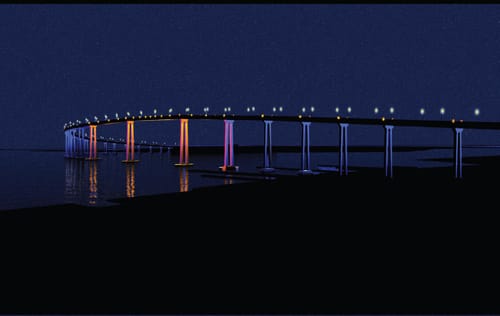 The high, graceful arches of the Coronado Bridge make it a thing of beauty, especially at night. Yet sadly, the 200-foot (60-meter) bridge is also an extremely popular suicide spot. From 1972 to 2000, over 200 people leapt to their deaths from this structure. The only year with no suicides was 1984. Unsurprisingly, signs have been put up on the bridge urging people to turn back and call a suicide hotline.

Around 12 people are known to have survived the plunge from the Coronado Bridge – one of them a suspected car thief, who was followed down by a police dog that, unfortunately, didn’t make it.

Psychologists have speculated that the awe-inspiring appearance of famous bridges makes them appealing to people ready to end their lives. These experts also suggest that jumping into water includes an element of fantasy, reminiscent of returning to the womb. Jumpers may not be cognisant of the real and immediate consequences: a long fall, yes – and one followed by an agonizing, disfiguring, painful death. 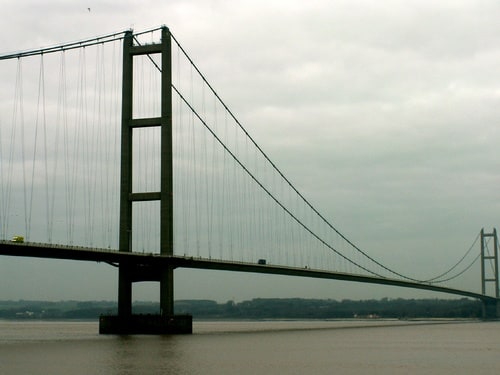 Residents living close to the Humber Bridge near Kingston upon Hull have learnt to brace themselves for an average of seven suicide jumps a year. Between 1981 (when the bridge opened) and 2007, roughly 200 people fatally hurled themselves into the chilly waters below. And the 98-foot (30-meter) drop makes death almost certain.

A particularly horrifying incident occurred in 2005. After a long custody battle with her husband, called Julio, a 28-year-old woman named Angela Schuman jumped from the bridge while clutching her daughter. In hospital, the words “Cause of death: Julio” were found written on Schuman’s stomach. Yet amazingly, both she and her child (who was a few days away from her second birthday) survived the incident. The daughter was hypothermic and made a recovery five days later. Schuman, on the other hand, suffered lower body fractures and spent nearly two months in hospital. They are two of five people who have miraculously survived the plunge from the Humber Bridge.

A proposed suicide barrier was announced in December 2009. Previously, such a barrier would not have been possible without compromising the integrity of the bridge. But thanks to modern design, this is now feasible. 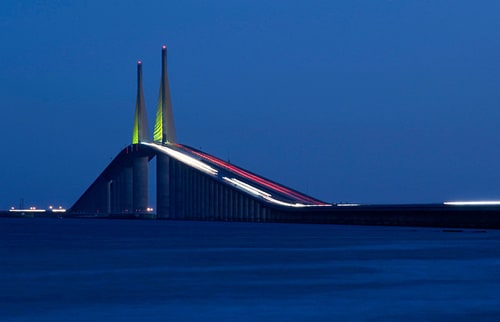 The new-look Sunshine Skyway Bridge opened in 1987. Due to its beautiful, picturesque appearance, it’s a popular place to shoot car commercials – but it’s also one of the top suicide spots in the USA. Up until 2009, no less than 207 people had committed suicide by jumping from the bridge into the green waters of Tampa Bay below. And during the same time period, a further 34 people are believed to have made the 175-foot (53-meter) leap and survived.

In 1999, in order to try and help would-be jumpers, six solar-powered phones were set up along the bridge and 24-hour patrols were initiated. Moreover, between 1999 and 2009, 23 would-be jumpers made the lifesaving phone call. But even so, the number of suicides has not significantly decreased, and according to a 2009 Tampa Tribune study, the bridge still averaged nine suicides a year from 1999 to 2009.

Cape Coral forensic psychiatrist Jerald Ratner says, “You are on stage. It symbolizes a glorification of suicide. It’s an act you want people to notice." 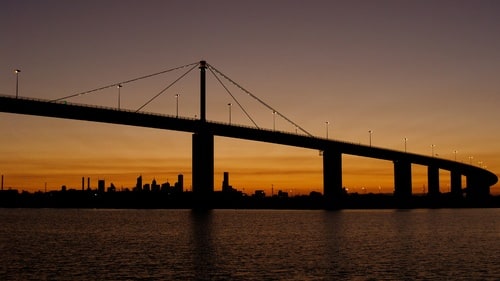 The West Gate Bridge in Melbourne has been tainted with tragedy since it first opened in 1978. On October 15, 1970, while construction was still in progress, a piece of the bridge collapsed and killed 35 workers – most of them on their lunch break in the huts below.

According to police data, around one person every three weeks leaps to their death from the 190-foot (58-meter) high bridge. And a 2000 study by the Royal Melbourne Hospital, based on 62 cases between 1991 and 1998, found that over 70 percent of jumpers had mental illnesses and that 74 percent of them were male.

After the suicide of a mother and her 18-month-old baby in 2008, a temporary suicide barrier was set up on the bridge. Since then, the number of jumping incidents has been cut by 85 percent. Still, if the previous jumpers had received the treatment and counseling they needed, perhaps some of them would still be alive today. 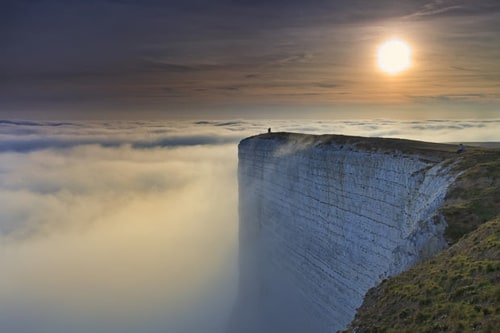 Beautiful Beachy Head in East Sussex is reminiscent of Dover’s famous White Cliffs. However, the peaceful-looking area is regularly dotted with memorials dedicated to the overwhelming number of suicides that take place there.

Every year, around 20 people kill themselves at Beachy Head, throwing themselves into the water or onto the rocks below. In recent years, major efforts have been made to discourage potential leapers. The Samaritans (a UK charity) have put up signs around the site asking people to call them before doing anything drastic. There’s even a so-called “suicide phone booth,” with the message, “The Samaritans: always there, day or night” posted in front of it.

The Beachy Head Chaplaincy Team (a Christian charity) also make regular patrols of the area in the hope that they can help suicidal people before they go over the edge. In 2011, they were involved in the rescue of 266 potential jumpers. 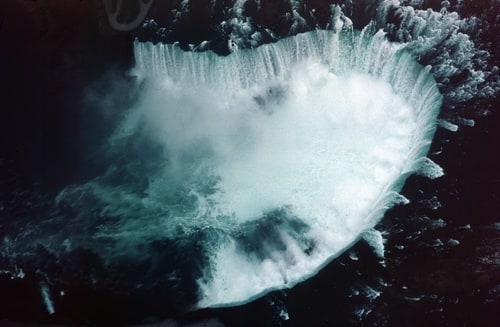 Sadly, breathtaking Niagara Falls on the border of Ontario and New York isn’t just a famous tourist destination. Every year, around 20 to 25 people leap into the turbulent waters below. Staggeringly, from 1856 through 1995, Niagara Falls was the site of 2,780 known suicides. And only three people are known to have survived the drop unaided by a safety device.

According to psychologist Sandra Sanger, “There is a certain appeal to committing suicide in a place of significance – a romanticism that goes along with it.” She goes on to explain that “there is also a collective sense of connection with other people in these last moments right before suicide occurs.”

Larry Berman, the executive director of the American Association of Suicidology, calls such hotspots “suicide landmarks.” Berman further explains that if a suicide is prevented at one of these locations, only a very low percentage of people who are stopped will make another attempt. 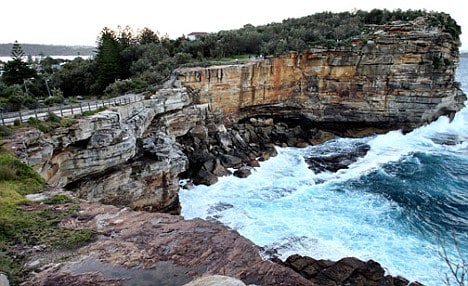 The South Head peninsula in Australia is a site of true natural beauty, but it’s also home to one of the continent’s top suicide spots. The Gap is a steep cliff that overlooks the Tasman Sea, and each year, about 50 people leap to their death there.

As at Beachy Head, efforts have been made to convince potential jumpers to turn back. An inward-facing security fence provides a physical barrier, and a number of Lifeline telephone booths have also been installed along with security cameras.

Until recently, the so-called “Angel of the Gap,” a retired WWII veteran named Don Ritchie, provided his own brand of home counseling to jumpers. Ritchie would approach people on the cliff top who appeared distressed and invite them home for a cup of tea and a talk. He is credited with having saved 164 people from leaping off the cliff since 1964.

Unfortunately, the cliff’s guardian angel – who was awarded a Medal of the Order of Australia for his efforts in 2009 – died in May 2012, leaving a significant gap. Let’s hope someone else will try to fill his shoes. 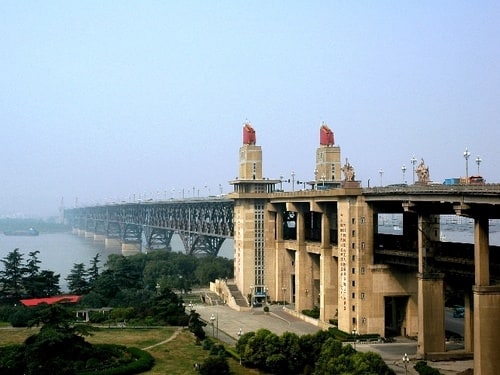 The Nanjing Yangtze River Bridge has two major claims to fame – or, in the second case, infamy: it was the first heavy bridge designed and built purely in China, and it’s one of the most notorious suicide hotspots in the world.

Between its construction in 1968 and 2006, 2,000 people took their own lives at the bridge. It’s estimated that around once a week, somebody makes the 130-foot (37-meter) leap to his or her death. That said, according to GQ writer Michael Paterniti, the exact number is difficult to pin down, “in part because the Chinese authorities refused to count those who missed the river, the ones who’d leapt and had the misfortune of landing in the trees along the riverbank, or on the concrete apron beneath the bridge, or who were found impressed in the earth like mud angels, two feet from rushing water.”

Measures to curb the loss of life have not yet been put in place, partly because the Chinese government refuses to acknowledge that the high suicide rate in their country is a problem. However, the bridge’s astonishing death toll inspired one local citizen to take up the slack through direct action.

Chen Si, described by Paterniti as “The Suicide Catcher,” is a Nanjing resident who regularly patrols the causeway and prevents jumpers from making their fatal leap. “He had a paunch, blackened teeth, and the raspy cough of an avid smoker, and he never stopped watching, even when he allowed himself a cigarette, smoking a cheap brand named after the city itself,” wrote Paterniti.

Curiously, the Wuhan Yangtze River Bridge, which also crosses the Yangtze River, is another suicide hotspot, the site of an estimated 24.7 suicides a year. 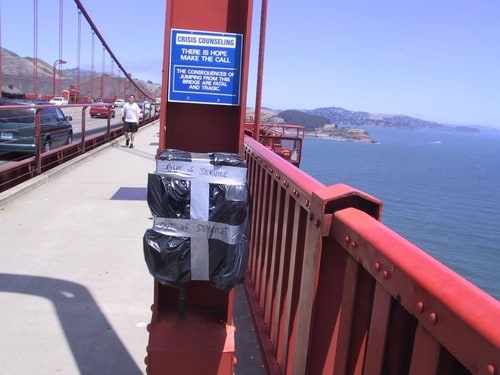 San Francisco’s Golden Gate Bridge has been described as the most popular suicide spot in the world. This 75-year-old structure has seen more than 1,500 (known) suicides since it opened in 1937. And according to some sources, the average is one every two weeks. The worst year was 1995, when there were 45 suicides. Yet a large number of people decide not to jump at the last minute. In 2006, 70 suicidal people were taken off the bridge before they made the 220-foot (67-meter) leap.

One of the few survivors is Ken Baldwin, a married 28-year-old man who had previously attempted suicide with painkillers and alcohol. He reported that his reason for leaping off the bridge was to force people to see that he was “hurting.”

“I still see my hands coming off the railing. I instantly realised that everything in my life that I’d thought was unfixable was totally fixable – except for having jumped,” Baldwin told The New Yorker. He was fortunate enough not to be killed on impact and was picked up by the coastguard.

The number of suicides at previous hotspots like the Empire State Building, the Eiffel Tower and Sydney Harbour Bridge has been greatly reduced thanks to suicide barriers. And the fact that self-destruction is still so easy at the Golden Gate Bridge has led to calls for greater protective measures. So far, however, the cost and aesthetics have prevented action from being taken. 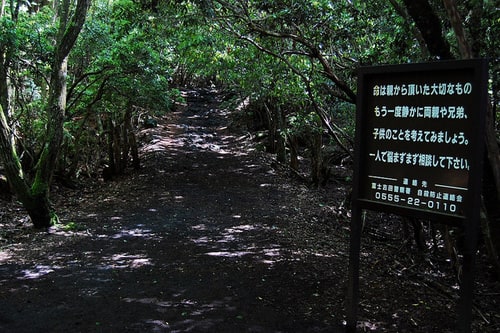 Picturesque Aokigahara forest, also known as the Sea of Trees, has been described as being haunted by angry spirits. What’s more, the death toll in the area is so great that local police have blanketed the forest with signs urging people to reconsider or to get in touch if they’re contemplating suicide.

By 2003, the suicide rate is said to have reached as high as 100 a year. And in 2010, according to The Japan Times, 247 people tried to kill themselves (54 successfully). In fact, the forest is so thick with bodies that there are annual searches to locate them. The location’s association with the occult and the paranormal is often linked with the high death toll.

Suicide is a major social issue in Japan. The problem has been blamed partly on the social stigma attached to mental illness and partly on increased work-related stress. Another theory is that it’s the result of Japanese culture’s tolerant attitude towards suicide and the low number of psychiatrists available to help. Also, national health insurance does not cover the cost of visiting private clinics in there.

The Most Beautiful Women Of All Time
648 item list by G̲lσb̶∆L J̅∆zZ∆l!s̲↱
51 votes

Movies that made me furious... by blackjack9

But When Does it End? I Wanna Go Home... by Laín Coubert

About serial murders by Villiana

The Fascinating Last Photographs of Famous People by propelas

Most Expensive Paintings Ever Sold by SFG¿mystic

Absinthe: The Green Fairy In Art by Hexenkult

Awesome Behind the Scenes Pictures by blankend

The Amazing Kids by Villiana

Watched in 2014 by Yoko Factor

Watched in 2013 by Yoko Factor

Watched in 2015 by Yoko Factor