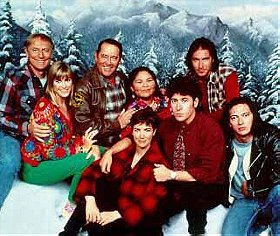 Bohunk
I always loved this show & have all the episodes on DVD. The writers were phenomenal; I always seemed to "get something" from most every episode. I think my favorite is when Maggie's house burns and they catapult the piano into the river - hilarious!
View all Northern Exposure reviews

Stehako added this to a list 1 month, 3 weeks ago

Agent Kermit D. Fonz added this to a list 9 months ago

""Tranquility Base" Air Date: June 26, 1995 "There's an old Yiddish proverb, When you don't know where you're going, every road will take you there." "

EatMorePez added this to a list 3 years, 11 months ago

That's Not Where it Takes Place (55 tv items)

Agent Kermit D. Fonz added this to a list 4 years, 2 months ago

"This CBS series premiered in July 1990, only a few months after Twin Peaks, first hit the airwaves – and this low-key comedy's philosophical musings and detours made it the cheerier twin to Lynch's darker show. Northern Exposure's Cecily, Alaska, may be at a slightly higher latitude than the Pacific Northwest, but it was just as chock-full of eccentrics. And its remote climes also welcomed in an outsider: Dr. Joel Fleischman (Rob Morrow), a New York City doctor dispatched to the snowy north."

InTheWitheringWind added this to a list 4 years, 4 months ago
B.B. Movies* (95 movies items)