And here we are again with another list that celebrates cinematic mandom. And yes, I am a bit late, but I wanted to make sure I did my research and saw all the titles I could. Here are ten instant classics released during 2016 that you really should check out if you like your masculine entertainment!
Sort by: Showing 10 items
Decade: Rating: List Type: 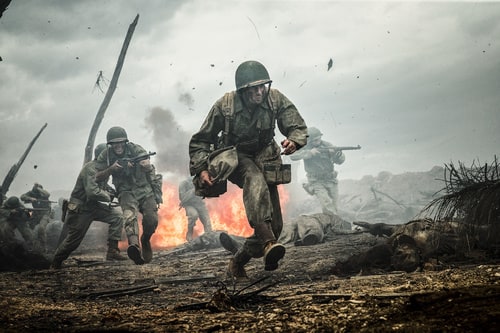 "With the world so set on tearing itself apart, it don't seem like such a bad thing to me to want to put a little bit of it back together."

Hacksaw Ridge was on my radar since Mel Gibson came aboard, and I built it up so much in my mind that I didn't think any motion picture could measure up to it...but it did. Not only does Mel's WWII opus fulfil my every expectation, it surpasses them with a confidence rarely seen in contemporary cinema. This is an amazing war movie, bolstered by great acting, great directing and great filmmaking. It's a love story at its core, and there are religious undertones, yet none of it threatens to sully the experience. Every frame is perfectly-judged.

There isn't much in the way of salty language, but there is some terrific manly bantering and one-liners, and once the battle scenes arrive...wow! Gibson doesn't hold back from portraying the horrors of war, but the action scenes are also insanely riveting, much like Saving Private Ryan. It's compulsively watchable, not boring, and it has plenty of replay value.

I don't care that the Academy passed it up for Best Picture, because in my mind, it's the best movie of 2016 and that's all that matters. If you haven't seen this gem yet, get it in front of your eyes! 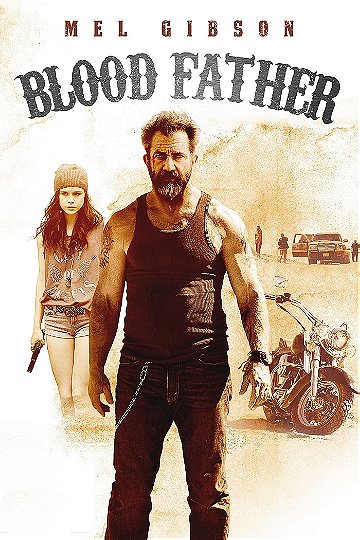 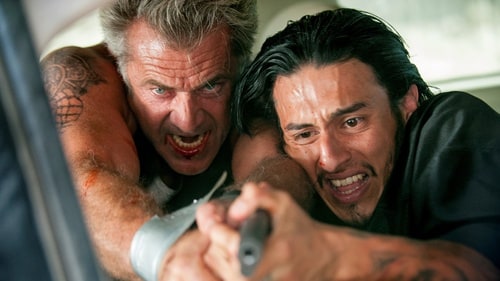 "I got no idea how you piss guys like that off..."

Here's a motion picture I've been looking forward to since it was first announced a few years ago, but the wait was worth it. Mel Gibson still has genuine acting talent, a fact that's increasingly evident throughout Blood Father, which features perhaps his finest performance to date, alongside Lethal Weapon. (Gibson's character even lives in a dingy trailer, very reminiscent of Martin Riggs' abode.) More than just a B-grade actioner, Blood Father is a heartfelt action-thriller which puts characters ahead of action, and finds a solid emotional core that I simply did not expect.

Viciously violent, the movie makes a real impact when it comes to the action sequences, and Gibson manages to be a rock-solid badass as he protects his estranged daughter from a dangerous gang whilst also delivering some amusing one-liners. Blood Father does its job extraordinary well before bowing out around the 90-minute mark, not outstaying its welcome. Yeah, it could have done with a bit more meat on its bones, but I can't complain too much. Make no mistake, I would love to see a pure action fiesta with Lord Mel in the centre, but a gratifying character-based drama with a few brutal action beats? Even better. See this one. 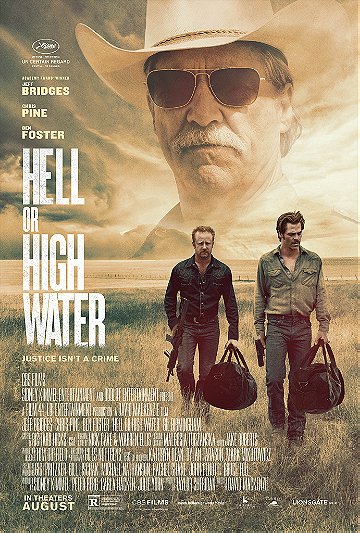 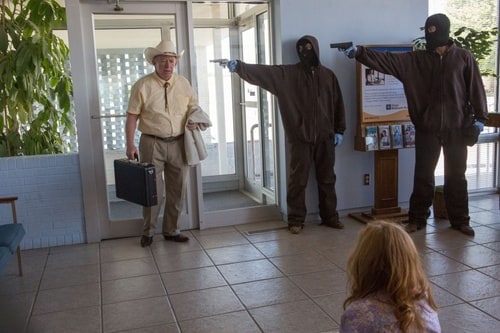 "I've been poor my whole life, like a disease passing from generation to generation. But not my boys, not anymore."

Here's another slice of pure, solid gold masculine entertainment, a thriller so involving and competently-crafted that it even attracted some Oscar attention. Written by the same dude responsible for penning Sicario (another deservedly well-liked manly movie), this is a slow-going movie at times, but it remains involving nevertheless, not to mention it keeps you on the edge of your seat when things begin to get intense. Better yet, you can actually understand why the "antagonists" of the movie are robbing banks, and it doesn't even demand that both of them receive penance for their actions. I cannot overstate just how refreshing it is.

Jeff Bridges is also present here, oozing masculinity from every pore. And when the scenes of gunplay do arrive, they are brutal and intense yet realistic too, which is a nice change. This is more or less a contemporary western, and the movie even has something to say about the world's current financial climate. I can't recommend Hell or High Water highly enough. 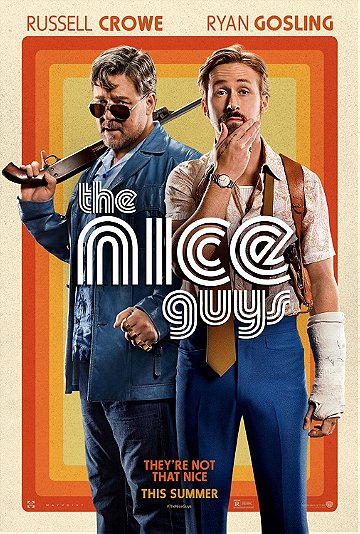 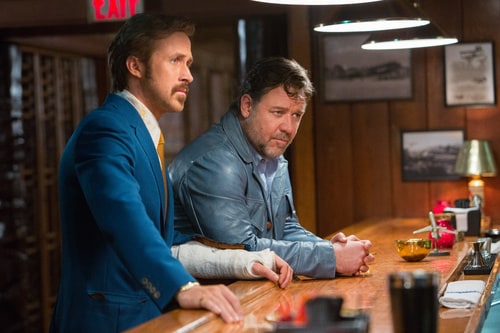 Black knows his audience, crafting another solid buddy action movie along the lines of The Last Boy Scout and, I'll say it again, KKBB. And just as KKBB flopped at the box office before gradually turning into a cult hit, I'm confident that The Nice Guys will get a second life on home video, especially because it was a reasonably high profile release. I enjoyed the movie at the cinema, and it still stands up at home. Indeed, I feel that repeat viewings actually improve the movie. It's still fun as hell. For those who enjoy masculine entertainment, you need to check out this instant classic. 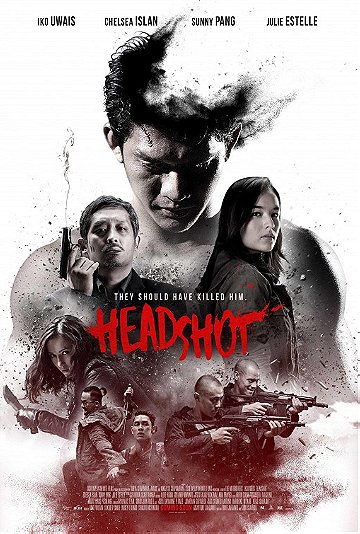 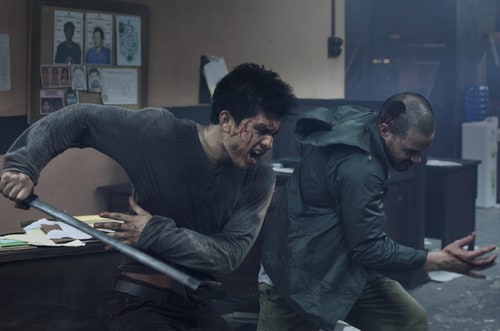 Do you like the Raid movies, both of which have appeared on my manliest movies list for their respective years? If so, then you'll love Headshot, which features several of the same actors, and is in the same style. An Indonesian action movie, Headshot is a blast of pure adrenaline, a fast-paced buffet of shootouts and martial arts sequences which utterly blew me away. It's insanely violent, too, and some of the gore is so extreme that I was taken aback - and that doesn't happen often. This is also a story about a dude trying to rescue a chick, a good old manly chestnut (feminists need not apply).

Headshot is one fucking badass movie, and men owe it to themselves to experience this awesomeness as soon as possible. 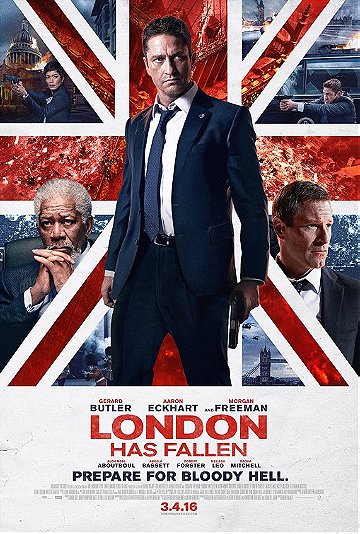 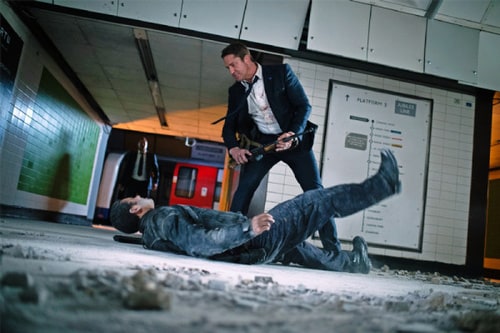 "Why don't you pack up your shit and head back to Fuckheadistan!"

And here we are with something that's a little more my speed. 2016 was a little light on the old-school action movies, but at least we have London Has Fallen, a cheesy delight which I'm glad to have on my Blu-ray shelf. The sequel to Olympus Has Fallen, another of 2013's manliest movies, this is an old-fashioned, tongue-in-cheek actioner which delivers action aplenty, along with a smattering of one-liners and some salty language, and it's a bit more competent than a straight-to-video action movie.

It does appear I'm one of the very few who enjoyed this one, but who cares? It's the kind of entertainment I like, and if you like manly movies, you should dig this one. It's fun. 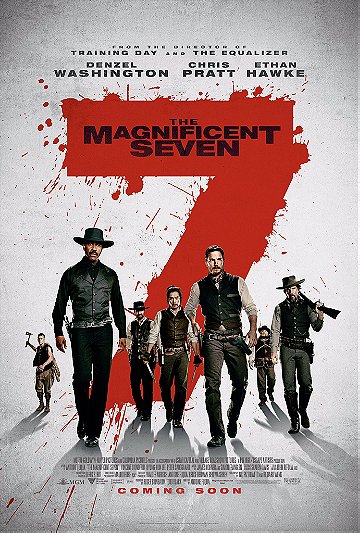 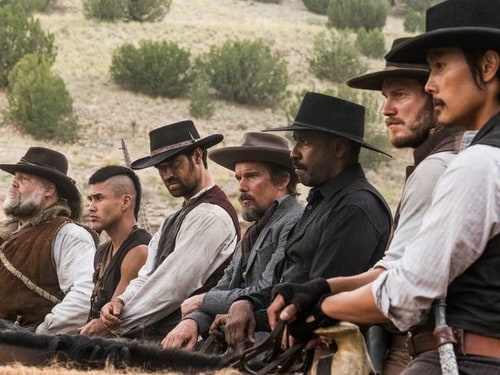 Antoine Fuqua has become one of the most reliable purveyors of manly entertainment (his movies frequently appear on these lists), and here he has created yet another good old-fashioned boys movie, this time in a western setting. The titular seven are enormously charismatic, and when it gets to the action scenes, there's lots to like. It's a handsomely-mounted actioner with thrills aplenty.

Although not an instant classic able to sit alongside Unforgiven or Open Range, it is a thrilling ride nevertheless, more in line with recent endeavours like 2015's Bone Tomahawk or the insanely underrated The Salvation. It's also nowhere near as good as Seven Samurai, but who the hell expected it to be in the first place? Flaws and all, The Magnificent Seven is primo entertainment. 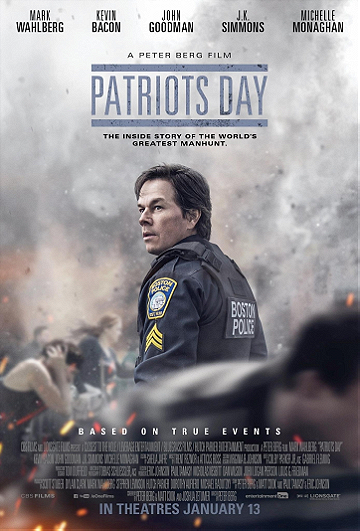 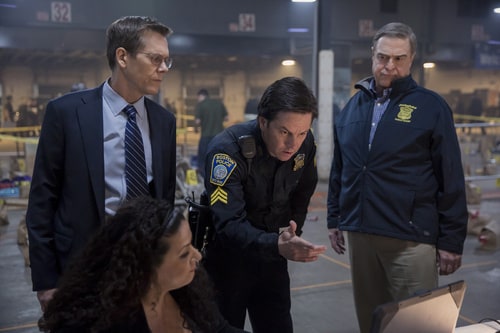 Patriots Day won't spring to the minds of many when pondering the manliest movies of the year, but I still feel that it deserves a place on this list. A dramatisation of the Boston Marathon bombings and the subsequent manhunt for the perpetrators, this is an enormously involving and almost unbearably poignant drama about courage and heroism in the face of tragedy. It's got a great cast, led by Peter Berg regular Mark Wahlberg, and it manages to deliver an accurate account of the official line of events, with a bit of fiction to make for a dramatically satisfying feature film. (As with any terrorist attack there are so many conspiracy theories about the official line being a hoax, but let's not open that can of worms. It's not relevant to the film.)

Berg, whose 2013 flick Lone Survivor nabbed a spot on my manliest movies list for that year, remains an exceptional cinematic craftsman. One of the true centrepieces of the picture is a staggering shootout on a suburban street, which left me on the edge of my seat chewing my fingernails. This is a terrific movie. 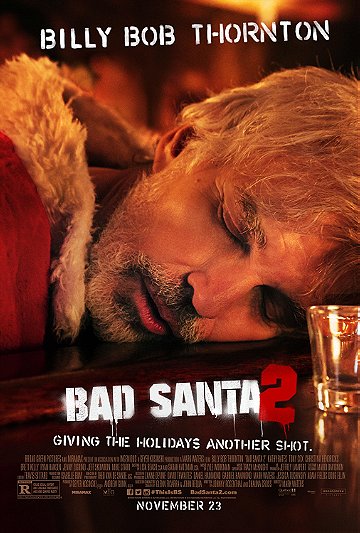 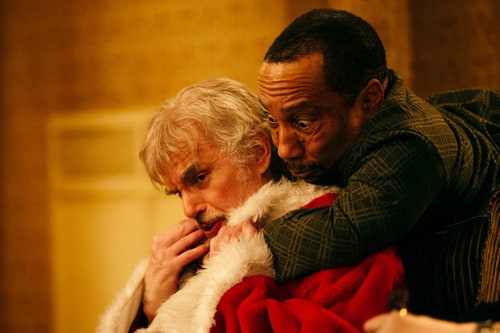 "Spare some change. Think about somebody besides your fucking self."

Here's another left-field entry that not everybody will agree with, but this list needed a comedy, and Bad Santa 2 fits the bill. The original movie still holds up to this day; it's a profane black comedy that I frequently enjoy whilst working my way through a bottle of bourbon, and this sequel delivers pretty much what I expected. BS2 is offensive, vulgar, and totally un-PC, with foul language in every scene as well as a lot of sex and drinking. So basically, it's everything that a manly man would want in a comedy.

Seems like from now on, every Christmas I'll be doing a Bad Santa double feature. "Everyone's fighting over the same pie and ignoring the crumbs. I live off crumbs."

War Dogs is very much an old-fashioned boys movie, so much so that it was even based on an article entitled "The Arms and the Dudes," which should tell you about the style of this drama-comedy. It's also a movie from Todd Phillips, late of the Hangover series, a trilogy of comedies that blokes certainly seemed to get a kick out of. War Dogs idolises mandom, with a pair of central characters who fucking love weaponry and the movie Scarface. The movie may not be an instant classic, but I certainly enjoyed it both at the cinema and at home.

BAMF's May 2017 Cinejourney by BAMF

Lessons To Be Learned From Horror Films by Agent Kermit D. Fonz

Movies Viewed in 2019 by PvtCaboose91

Movies That Were Hilariously Sure Of A Sequel... by PvtCaboose91

Movies Viewed in 2016 by PvtCaboose91

Movies Viewed in 2020 by PvtCaboose91

Movies Viewed in 2017 by PvtCaboose91