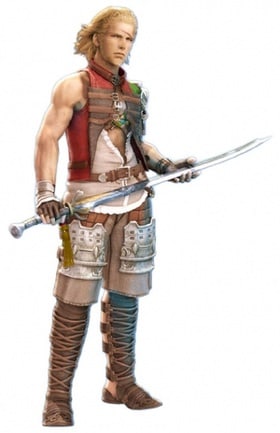 Although Basch barely hits the 6ft marker, he is a colossus in his own right. When fully donned in his brother's Judge armour, Basch can easily pass as a golem. Basch's physical stats are through the roof and so when you eventually equip him with a Sledgehammer, he is unstoppable. 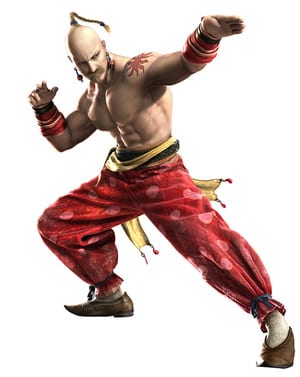 6ft. Despite being the resident muscle, Yang also serves as a wise old mentor for your team. He barely wears armour, doesn't even need to equip weapons and he is still one of the most powerful members of your party statistically. Wallop!
Seaworth's rating: 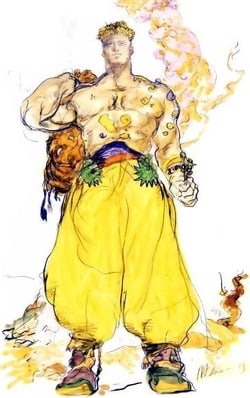 At 6'3", a set-squared jaw and a body built like a 7th wonder, Sabin is a hazard to all enemies. One of his more legendary moments is when he holds up an entire collapsing building so your party can enter to save children.
Seaworth's rating: 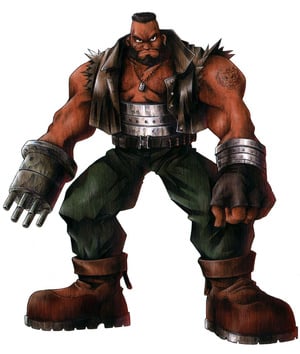 From the beginning of the game, it is quite clear that Barret will not be using magic in your party. This 6'4" bear was made for bringing on the pain with his customisable Gun-ARM; whether he is clawing at you with the Atomic Scissor or the Pile Banger, smacking you with the Rocket Punch or the Cannon Ball or riddling you full of holes with any of his numerous automatic weapons.
Seaworth's rating: 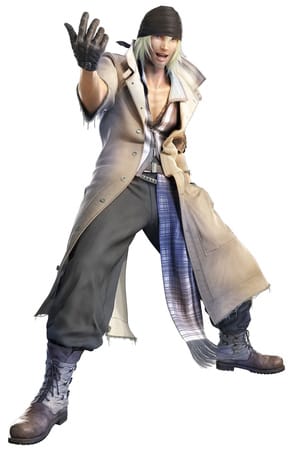 The 6'7" Snow can take punishment. He is tailor-made to withstand a beating and also serve back with a vengeance. He even has enough strength to carry people and run at full speed!
Seaworth's rating: 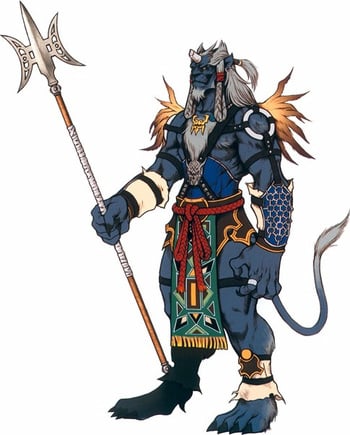 SAVE SOME FOR KIMAHRI! is a riotous catchphrase in my neck of the woods. It is one of the few audiable things that Kimahri says throughout the game.

Kimahri is a disgraced member of his tribe after he was beaten by two rivals. The 6'8" Ronso was bullied for his short stature (!!!) and was sent away from his home on Mt. Gagazet. Kimahri spends a majority of the game being the resident totem pole with barely anything to say.

Kimahri's ability to jump from a monumental height onto his foes with a halberd is devastating.
Seaworth's rating:

Haha! Ward is outrageously billed at 7' flat. Not saying it isn't portrayed that way but just to make sure that the cast of VIII have a gargantuan tank.

To make things even more hysterical, Ward's weapon of choice is a naval vessel's harpoon which is roughly the same size as him! His attacks consist of him hurling this at the enemy and then awkwardly running up and taking it back!

Ward also has the distinction of being overweight which is rare for a playable character in the vain franchise.
Seaworth's rating:

Guy serves as a party member for the entire game but his role is rather minimal. However, he packs a punch! Guy has the stats and the weapon affinity to crush all that stand in his way.
Seaworth's rating:

The entire world of Final Fantasy IX is disproportionate! You cannot compare their height to regular standards but one thing is for sure is that Amarant stands heads above all other characters (and that doesn't include his afro!).
Seaworth's rating:

Zeid is a member of the Galka race which are the largest and tallest of the enlightened races in Vana'diel. This married with his damage-dealing job as a Dark Knight makes him a force to be reckoned with!
Seaworth's rating:

Another recurring element of the Final Fantasy series is being able to recruit a character who by all means is a behemoth of creation. These statuesque giants are the motherfucking brick-shithouses of most games and have abilities that can shake the foundations of the very continents they stand on.

25 best new characters of the decade by CelShader

My favorite anime show by Mikkel

My Road of Pokemon Games by Kami

Games I ♥ by Kami

30 Days of Video Games by Neruk

The Light of Day by Seaworth