Kickman is such an odd title, but it's also extremely frantic and fun. You control a clown on a unicycle riding beneath balloons that drop down you goal is to make sure that none of these balloons hit the ground. You have the ability to kick your legs out, hence the title, to knock the balloons back into the air and have them bounce around the screen, Breakout-style. As you're trying to keep these balloons in the air, more continue to drop, making it an enjoyable and hectic game to play. This game was an absolute blast for its time and if you're into Atari 2600-era games, I really can't recommend this one enough.
ape's rating:


Let's face it, as fun as it is to ignore the game and just swing around with Spider-Man's web-shot, the real fun is "accidentally" missing your shot and watching Spidey plummet to his demise. Spider-Man was one of the first games where I had just as much fun just goofing around as I did actually trying to play the game the "right way." In all honesty, it was probably the best Spider-Man game until the first Playstation One Spider-Man game hit store shelves 18 years later. Not too shabby.
ape's rating:


Mouse Trap is Coleco's answer to the popularity of Pac-Man. It plays like Pac-Man except in Mouse Trap, you control a mouse. Instead of obtaining power pellets that instantly allow you to eat ghosts, the mouse can pick up power-ups and stock up on them, to use when needed. When used, these power ups transform the mouse into a giant dog head, which scares the cats into hiding. It's a decent Pac-Man clone, and better than the 2600 Pac-Man game, but nowhere near the quality of the arcade version of the game that the yellow Namco mascot stars in.
ape's rating:


What a disturbing game. Oink! puts you in the roll of the three little pigs from the fable where the wolf blows their houses down...Except in Oink!, instead of blowing their houses down, the wolf has a tongue like a frog and uses his tongue to demolish your house one brick at a time...While he does this, you need to try to patch up the holes. If he breaks down enough of the wall with his disturbingly long tongue, the wolf will then try to lasso you with his mouth-based anatomy and drag you to your death. Overall, it's a decent game and not a bad one to pick up if you're looking to expand your Atari 2600 collection.
ape's rating: 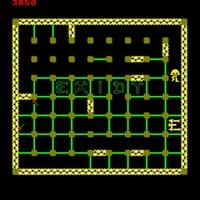 
Hard Hat is a decent, but largely ignored arcade game from the early 80's. I think it was due to the fact that it's a little confusing at first. At a time when games like Pac-Man could be played and the player would know immediately what to do, Hard Hat doesn't follow that trend, which is why I think it may have failed. Anyway, in Hard Hat, you want to find the letters in the screen and move them to where the letter outlines are. The scaffolding grids that you're likely to focus on when you first start playing aren't mandatory to get like the pellets in Pac-Man, which is where most folks seem to get a tad confused. But anyway, it's a decent game...Not worth going out of your way to play, but if you come across a cabinet somewhere, take the time to play it - there aren't many still in existence.
ape's rating:


Math Gran Prix would have been a game that I loved when I was a kid if I had owned it. I was fond of educational games with a twist to them, and Math Grand Prix was essentially a board game where instead of rolling dice to advance, you just solved basic math problems. It's a very basic game, but considering the target audience, it didn't need to be really fancy...Although, for its time, it still was pretty fancy anyway. It lacks enough variety for me to give it a higher score, but it's still a quality game in the education genre.
ape's rating:


M.A.D. feels like a different take on the Missile Command formula. Instead of dealing with missiles, in M.A.D. you have to deal with kamikaze pilots of planes and helicopters. The aircraft enter the screen and turn white if they're about to nose-dive into the buildings below. You're also not armed with explosives, but bullets and you've got to try and carefully aim for the suicide aircraft as they try to take everything out. It's not a horrible game, but it feels like an inferior knock-off of Missle Command rather than a fun, unique game.
ape's rating:


I think Venture was Coleco's attempt at creating a better adventure game than Atari's Adventure. It didn't work. Not even close, actually. While Venture is a passable game, and not terrible, it lacks the quality and sense of exploration that Adventure had. It's not horrible, like I said, and worth playing if you get a chance, but if you can only play one adventure game on the Atari 2600, skip this game and play the game that the genre was essentially named after - Adventure.
ape's rating:


Lost Luggage basically puts you in the roll of picking up luggage hurled out of a UFO. Why? I don't know. Maybe the guys collecting the luggage cheated on their girlfriends on the UFO, the ladies found out, locked the fellas out of the flying saucer, and hurled their belongings out of the windows...which you then needed to catch. Sounded like a good story in my head. Anyway, the very low difficulty makes this game get very boring very quickly. It's not necessarily a horrible game...but after more than 30 seconds of gameplay, you'll probably be looking for something else to pop in your Atari VCS.
ape's rating:


I don't really know where to start with this game...Nor do I have any idea how the people at Mystique/Playaround came up with this stuff. But anyway, Beat 'Em & Eat 'Em has you controlling two naked women on the street while a naked fellow on a rooftop, with his dingaling hanging out over the roof ledge, shoots his semen down to the street. Your goal is to catch the semen in the mouths of the naked lady folk. If any touches the street, it's game over. If they catch it all, they look at you and smile. It's rather disturbing. Perverted aspects aside, the game itself is mildly entertaining and may be the best Mystique game that I've played...But that's not really saying a whole lot.
ape's rating:


A lot of folks point to Pac-Man as a game that started the downward spiral that was known as the video game crash of '83. I've heard some folks say that it was the worst game they've ever played. It's not THAT bad, but it's also not very good at all. The main issue with this poor port of the great arcade game is the ghosts. The ghosts are always flickering on the screen (each ghost appears in a different frame, which is why you'll never see an Atari 2600 screenshot with all four ghosts on it, unless it's been modified), which would be fine, except it's not always easy to tell if the ghosts are still edible after eating a power pellet, which can result in pretty cheap deaths. Pac-Man also only faces one direction at all times, which is a bit weird. Much of these irritating qualities of the game were due to the fact that Atari rushed designer Tod Frye to finish the project rather than let him put enough time into it to make a quality product. It's unrealistic to expect a perfect port of the arcade original on the Atari 2600 hardware, but it's not unrealistic to expect a game of better quality than this.
ape's rating:


Let's face it - A Mystique/Playaround compilation is almost certainly destined to be horrible. I thought it'd be mildly good with the mildly entertaining Beat 'Em & Eat 'Em as one of the two games here...But the other game is Lady in Wading...A game that was never released as a stand-alone game. In this game, you're a naked woman that has to build a bridge across a dangerous moat while avoiding various obstacles in order to get to the tower on the other side of the water, where a naked prince charming is waiting for you. Unnecessary adult theme aside, the concept sounds like it could be fun...But unfortunately, it's not. It's a case where the developers seemed more intent on putting naked people in the game (and adding in animations of the two having intercourse in the tower) than they were in creating something that was actually enjoyable to play.
ape's rating:


E.T. probably would not have been such a frustrating game had it not been for those dang pits. Falling into pits to find pieces of a phone so the hairless-sloth-looking alien can go home is one thing. Floating out of the pit only to fall right back in....Repeatedly....That's a whole 'nother story. Though, seeing E.T. die and watching Elliot insert himself into E.T. to revive him did make me chuckle more than once. Anyway, apparently there's a ton of these buried in some landfill somewhere. I'd make the argument that the dirt-covered cartridges probably play better anyway - Once you put 'em in the system, they probably won't start at all.
ape's rating:


Custer's Revenge is, based on the description on the box, a game about rape. You play as a nude General Custer while he tries to dodge arrows of the Native American warriors in order to rape a Native American woman named Revenge, who is tied to a pole. Not only is this an extremely poor idea for a video game, the game itself is poorly executed. I'm thankful for that, too. I'm not sure how I'd feel if I had to type the words, "That rape game had a poorly-chosen theme, but it plays like a dream!" Hey, that kind of rhymed. Anyway, if I ever meet the mastermind behind this game, I'll gladly let their stomach meet the Duke brothers, Righty and Lefty. A one, two punch right to the gut.
ape's rating:

Favourite Films of the 90s by Toby White

Favourite Films of the 70s by Toby White