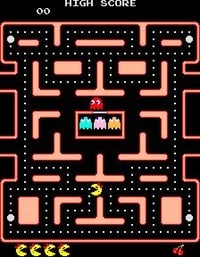 
Pac-Man was, and still is, a great game...But Ms. Pac-Man adds to the already great Pac-Man formula and might even tweak it to perfection. The best part is that while in Pac-Man the AI was predictable, the AI in Ms. Pac-Man is more random, meaning that once you think you've got their pattern down, the ghosts could surprise you. It's worth noting, however, that Ms. Pac-Man was never a planned game. It was actually a hack of the original Pac-Man named "Crazy Otto." Once Midway, the American distributor of Pac-Man, saw Crazy Otto, they bought the game and transformed Otto, from his "Pac-Man with legs" appearance to the "Pac-Man with a ribbon on his head" look that we've all come to know and love. In my opinion, it very well could be the best arcade game ever made...And it's a major contender for best game, period.
ape's rating:


Yars' Revenge is a unique little shooter only spans one screen, and is pretty repetitive...But so dang addicting that the repetition doesn't affect it much. You control a Yar, which is the fly-lookin' thing, and you want to destroy the shield in front of the Quotile hiding behind it, avoiding the deadly swirl and using the Ion shield (the multi-colored stripe on the screen) to shield yourself from the Quotile's regular, homing fire. After destroying the Quotile by using the Zorlon Cannon, you get a screen-sized explosion...Followed by another Quotile to destroy. The difficulty increases as you survive, which doesn't make it too repetitive...But as I stated earlier, the game is good enough where repetition could be seen as something to look forward to.
ape's rating: 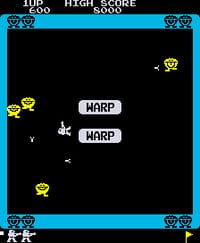 
I wish I knew why this game didn't get more attention...It's both innovative and fun. At first glance, Warp & Warp looks like a regular shooter...Walk around the level, shoot at enemies, don't get shot yourself...The catch is there's a warp portal in the center of the room. When it says "warp" on it, you can walk between them and warp to another world with different gameplay. The second world plays like a crude bomberman. You don't have bullets, only bombs, and you need to lure the enemies into the bombs you drop in order to kill them...After a while, the warp portal opens up again and you warp back to the shooter level. The warping between levels was innovative back then and the change in gameplay between the levels really prevents too much repetition, making this a game that takes quite a while to get old. It may not be well known, but Warp & Warp, in my opinion, is one of the better early Arcade games by far.
ape's rating:


Missile Command was fun in the arcades, and while graphically inferior, the Atari 2600 version brought a very similar experience to your home, without the need for quarters or dealing with joysticks coated with pizza grease from the hands of total strangers. The concept, for those not in the know, or too young to remember, is simple - missiles are coming down from the top of the screen. Your goal is to cause explosions in the air to destroy the missiles before they can destroy anything on the ground - and destroying multiple missiles with a single explosion is the key to surviving the later levels. It's very simple, and it's also still quite fun today.
ape's rating:


Spacechase, in my opinion, is one of the more visually pleasing Atari 2600 games. I suppose I'm just a fan of the rotating planet background. But anyway, this is just a basic shooter...But it never really becomes anything special. Basically, you need to shoot ships. Ships appear on the screen in waves of four and they move back and forth, firing at you along the way. That's it. Sure, the ships get faster and faster...But that's not enough to make this game worthwhile when you've got other games like Space Invaders available on the system that do this formula bigger and better.
ape's rating:


Defender in the arcades is quite good and probably one of the must-play titles from the early days of video games...The Atari 2600 version - not nearly as good. The home version of Defender is barely passable and was alright if you absolutely must have had something similar to the arcade classic in your home, but heading to the local arcade and popping in a few quarters would have been a much better choice than buying this game.
ape's rating:


Ice Hockey is a mess. Plain and simple. In what should have probably been more of a game of Pong, but with hockey players instead of paddles, Ice Hockey ends up being dang close to unplayable. I like the simplicity of several of Activision's Atari sports games, but this game is not one of them. It deserves to be put in the penalty box...and by "penalty box" I mean trash can.
ape's rating:

Pokemon: Best to Worst by LordDarkrai

Favourite Films of the 90s by Toby White