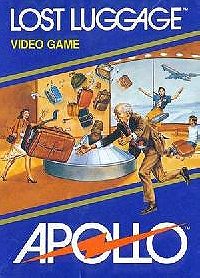 Programmer Ed Salvo was inspired to make Lost Luggage when he was waiting for his luggage at the Dallas/Fort Worth International Airport, and the game took around four weeks to produce. Reviewers criticized the game's similarity to Activision's Kaboom!—which itself is based on Avalanche—believing Lost Luggage to be an inferior clone. ... (more) (less)
Tags: 1982 (1)
My tags: