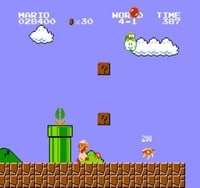 
Mario Bros. was a success in Arcades, but rather than stick with a similar formula for the sequel, Shigeru Miyamoto instead created a game that was absolutely massive for its time, with scrolling levels, power ups, and various enemy types and secrets to discover. He created such a solid game, in fact, that Super Mario Bros. is still just as fun to play today as it was in 1985...And few games have had such an effect on such a wide audience...My friend's mother knew where the hidden 1-up was in level 1-1, where the warp pipes were in level 1-2, etc. It was the greatest game ever made when it was released, and while it may or may not be number one any more, it can still more than hold its own in a debate over what the greatest game ever made is.
ape's rating:


Paradroid really is a game that does not come across as being as great as it is until you figure out what you're doing...And then it feels like it was ahead of its time. Paradroid is a multi-directional shooter...But one major design element really makes it stand out in comparison to games of its day - you can gain control of any enemy robot that you encounter by holding the fire button, ramming into the robot, and completing a mini game...In a sense, half of the strategy in the game is to hunt down more powerful robots so you can steal their body and use it as your own. Playing the game as a simple shooter is fun on its own. Hacking into other robots to use their weaponry just takes this game to a different level.
ape's rating: 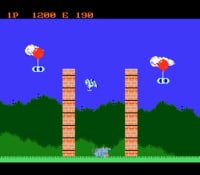 
Astro Robo Sasa was one of the first import video games that I fell in love with. It's one of those games where it takes a while to get used to, and until you do, you'll be horrible at it. But, it's also a game where you can notice your progression of mastering the game...You'll noticeably get better the more you play...That feeling of accomplishment was one of the best rewards you could get out of a game back in the 80's, and Astro Robo Sasa provides a good example of it.
ape's rating: 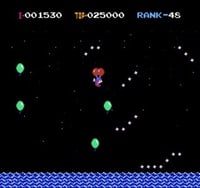 
Balloon Fight has two modes of gameplay - one involves you on a single screen, floating around trying to pop the balloons of enemies around you while also trying to prevent your own balloons from being popped. This mode is pretty fun and makes Balloon Fight a worthwhile game for its time in its own right. The second mode is simply called "Balloon Trip" and is a side-scrolling game where you try to last as long as possible and rack up as many points as possible before your balloons pop and/or a giant fish eats you. The addition of this mode really makes Balloon Fight shine, in my opinion. Hello Kitty World later improves on the "Balloon Trip" concept, but Balloon Fight did a dang good job debuting it to the world.
ape's rating: 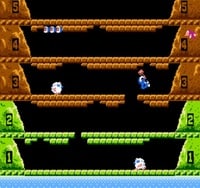 
Ice Climber wasn't all that well known until both the male and female Ice Climber from the game appeared as playable characters in Super Smash Bros. Melee on the Gamecube. And while this isn't the greatest game ever made by any stretch, it's still good and deserving of the attention it received after Melee gave it a little boost in popularity. If you've never played it, basically, you just hop your way upwards, breaking ice and either avoiding or attacking enemies along the way...The you reach a bonus round where you collect a bunch of vegetables. Climbing ice for vegetables - a solid concept for a solid game.
ape's rating: 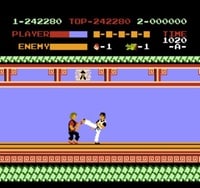 
I never saw the big deal about Kung Fu, to be honest with you. The collision detection isn't always the best as you traverse through the levels - particularly when battling the level-end bosses, and while there are slight variations in enemy designs and tactics, you're still essentially just doing the same thing over and over through each of the five levels. It's a passable game for the time it was released, but unless you grew up with this game as a favorite, you probably won't be too enthralled with playing it today.
ape's rating:


Racing Destruction Set has promise, but just falls short of being decent, in my opinion. The game plays as a split-screen isometric racer. The split-screen is kind of neat as it lets you always be aware of where your opponent is on the track...But at the same time, a full screen would be nice when you're not playing with a friend. That said, expect to crash....a lot. Even the computer crashes all the time, so I'm guessing it's part of the game design....But I just found it frustrating to play. I like the ideas here...Don't like the execution.
ape's rating: 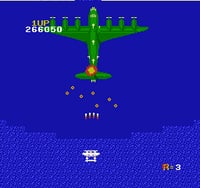 
1942 is a very solid scrolling shooter...Until you play for more than a few levels and begin to realize that nothing around you is really changing aside from (very, very slowly) the background. 1942 does not change up much, even after you play through to the end...And if you can stay awake long enough to reach the end, you'll quickly find out that while 1942 can be fun in small doses, the more you play, the more boring it becomes. Less is more when it comes to 1942, it's a shame that the developers didn't see things the same way.
ape's rating:


I prefer the NES version of Friday the 13th by quite a large margin. The Commodore 64 version is totally different and really has no sense of danger...When "Farmer in the Dell" plays in the background as you try to hunt Jason Vorhees down, something is terribly wrong. It's also bad when you are the one doing the hunting in this lame game of hide and seek. I beat Jason to death with a stick without any troubles, so not only do you have to hunt him down, but killing this supposedly intimidating murderer is a breeze. If you don't like the NES Friday the 13th, play this game and you'll gain a new appreciation for it.
ape's rating: 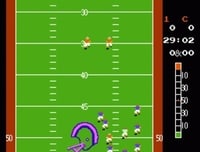 
10-Yard Fight is a so-so football experience that isn't that good, but it's not the worst game of pigskin, either. If you don't mind a slow, methodical game of football, you may enjoy 10-Yard Fight a bit more than I did. I, however, want a quicker-paced game and better options for passing when I'm on offense. If you're a football fanatic, I'm sure you'll find at least something to like here...But I was bored out of my mind.
ape's rating:


Sex Games is, like most adult-oriented video games, a total waste of time. Hey, there's nude people on my screen having intercourse. Look at the pixels on that woman. I bet they're fake. Anyway, Sex Games can be beaten in roughly twenty-five seconds...And then you're done. The whole premise is moving your joystick (the controller, fellas, not the thingamabob between your legs) back and forth according to the images that pop up on screen. Do it enough, and you'll satisfy your partner and a "?" box will open up with a new position...Each box lasts about 5 seconds, essentially making this about as pointless of a game as you could play. The only reason the score isn't lower is because the controls work well...But that's honestly the only compliment I can really give it.
ape's rating:

My Gaming Firsts by AVPGuyver21

A movie a year by Dvdmacyoshi