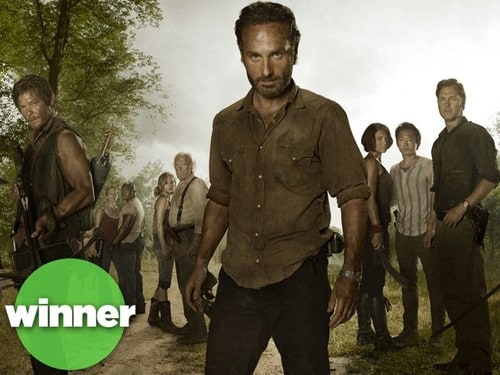 Quick: What’s TV's top-rated series with adults under 50? Here’s a hint: It’s not on any of the major networks. AMC’s high-octane zombie drama has been chopping heads and taking names in Season 3, drawing 10 million viewers a week (a full 50% increase from last season) and topping huge hits like “The Big Bang Theory,” “Modern Family,” and “The Voice” in the key adults 18-to-49 demographic. All of this, despite the fact that “Walking Dead” is a gory adults-only drama with no major stars in its cast. This all but guarantees we’ll be seeing more zombie-themed TV shows in the near future; hope you’ve got a strong stomach. 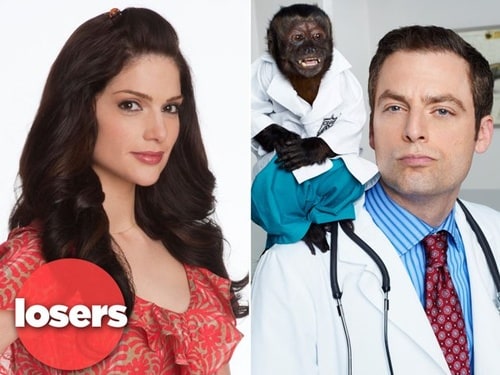 “Made in Jersey” (CBS)/”Animal Practice” (NBC): The networks have been slow to cancel their underperforming new shows this season… which makes the two that did get the axe look even worse by comparison. The Garden State-set legal drama only aired twice before CBS closed its case for good. (It will reappear on Saturdays soon, though.) At least NBC’s veterinarian comedy got to air six installments before getting canned. Two takeaways from these twin failures: TV’s “Joisey” stereotype may finally have jumped the shark (thank God), and it’s never a good sign when a monkey is the most notable thing about your show. 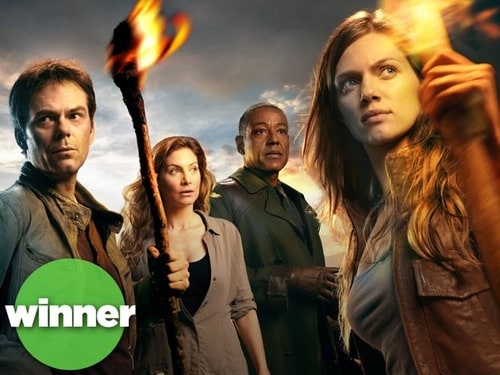 The Peacock Network has struggled for years to climb out of the ratings basement, but they hit upon a winning formula with “Revolution." (And that formula is “'The Walking Dead' without all that gross zombie stuff," apparently.) Set in a post-apocalyptic wasteland with no electricity, NBC’s sword-swinging freshman drama takes advantage of viewers’ current appetite for genre fare (and a comfy timeslot after “The Voice”) to pull in 8 million viewers a week, making it the one unquestioned new hit of the fall season. 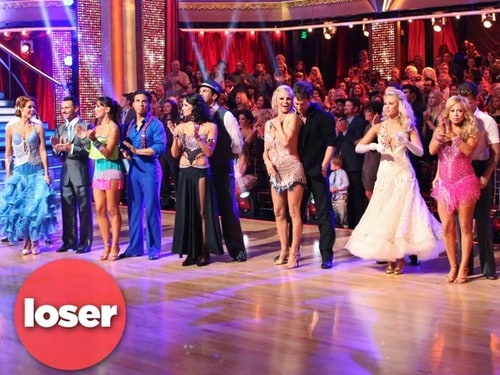 Dancers can’t stay young forever… and the same is true of ABC’s creaky dance competition, which is definitely showing signs of aging in its 15th go-around this fall. Even though it’s brought back popular all-stars to compete this season, “DWTS” is stumbling in the ratings, debuting 30% behind last season and hitting a series low among young adults. (Maybe people are tired of watching not-famous “celebrities” dance not very well?) That’s bad news for ABC, which currently programs three hours of “DWTS” a week; when they do finally decide to dump the show, they’ll have to do a lot of tap-dancing to fill out the rest of their schedule. 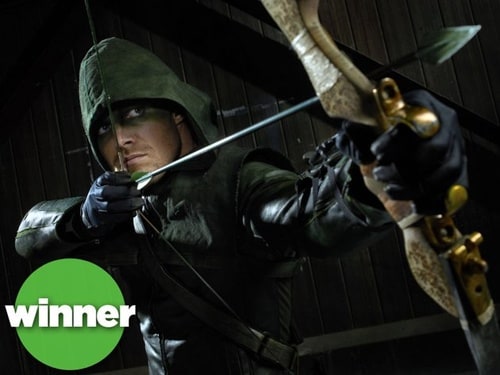 The CW finally hit a ratings bulls-eye with this superhero drama (brought to you by the creators of their last hit superhero drama, “Smallville”). This dark take on DC Comics’ Green Arrow debuted last month to 4 million viewers -- the best ratings The CW has seen in three years. Together with the still-strong “Vampire Diaries,” The CW actually has a few decent shows to build a schedule around. Maybe we’ll have to stop laughing when they call themselves a network soon. 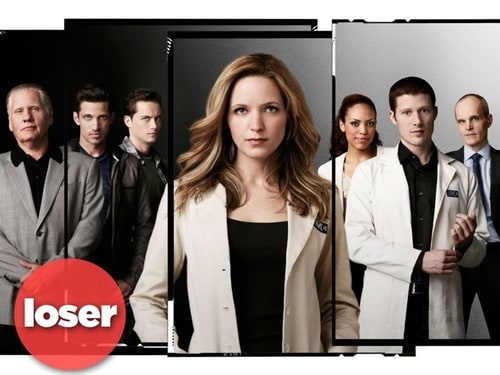 The producers of this dead-on-arrival medical drama must have been praying for the World Series to go seven games, because that delay was the only thing keeping Fox from pulling the plug. “Mob Doctor” showed weak vital signs from the start and fell to a miserable 3.5 million viewers with its last airing -- but mercifully got a four-week reprieve while the MLB playoffs finished up. It’s only a matter of time before this one heads to the TV morgue. 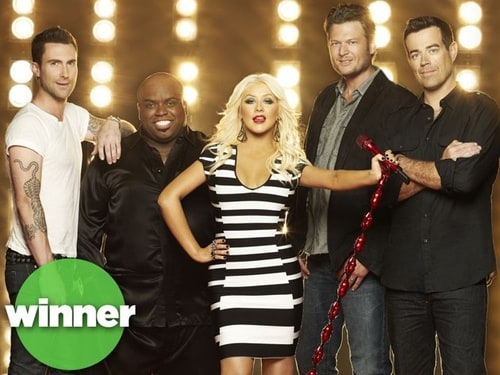 Doubling down on its swiveling-chairs singing competition has paid off this fall for NBC. With its first fall edition, “The Voice” has established itself as a ratings powerhouse, regularly placing in the week’s top 10 programs among young adults and outdrawing rivals “DWTS” and “The X Factor.” And its boffo ratings have helped provide a boost to NBC’s new offerings like “Revolution” and “Go On.” Those of us hoping for the swift demise of TV singing competitions are a bit disappointed, though. (Maybe the impending “Idol” trainwreck with Mariah and Nicki will keep that dream alive?) 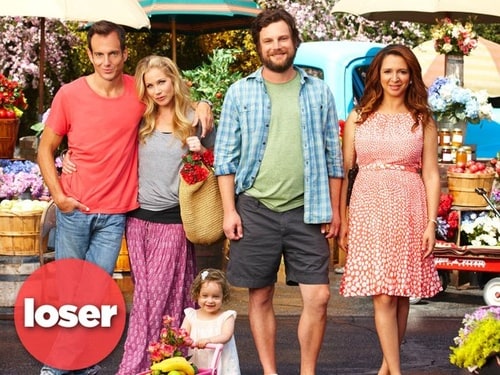 No one was all that excited to see this Christina Applegate-Will Arnett family sitcom come back for a second season, and that lack of enthusiasm is reflected in the ratings: “Night” is drawing fewer than 4 million viewers a week and getting regularly trounced by CBS’s “Two and a Half Men.” The weak numbers may have led to NBC’s decision to retool the show, switching from single-camera to a multi-camera comedy shot before a live audience. Yeah, we’re pretty sure the number of cameras doesn’t matter if the audience isn’t laughing. 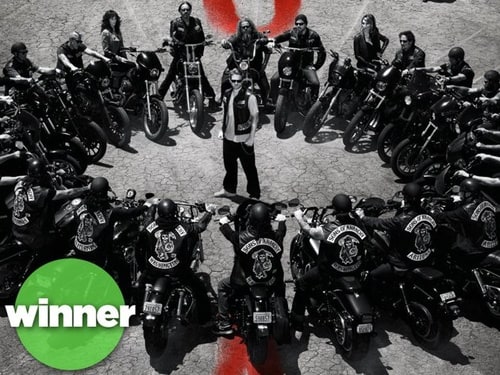 Right behind “The Walking Dead” in the current trend of cable series outdrawing the big networks is FX’s rough-and-tumble biker drama. “Anarchy” has always boasted a fiercely loyal fan base, but it’s really revved up its viewership in Season 5, breaking ratings records and racing past network rivals like “Vegas” and “Parenthood” among young adults. Looks like SAMCRO will keep on riding for a few more seasons, at least. 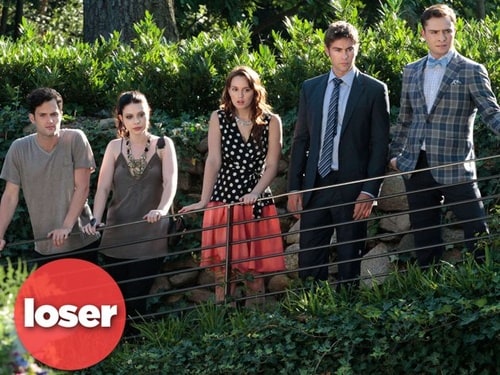 Spotted: A sharp ratings decline for this long-in-the-tooth teen soap, which drew a piddling 780,000 viewers for the premiere of its sixth and final season. (You couldn’t even make it to a million, Serena and company?) Sure, “GG” has always been bigger on buzz and magazine covers than actual ratings, but now that “Arrow” and “The Vampire Diaries” are scoring for The CW, the days of falling back on buzz are over. The “Gossip Girl” series finale will air December 17… and not a moment too soon. (XOXO, though.) 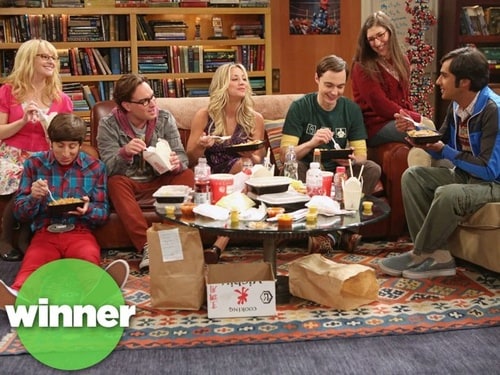 Revenge of the nerds! Now in its sixth season, CBS’s geektastic sitcom has methodically built up a massive audience, and now stands as TV’s top-rated comedy, beating out last season’s champ “Modern Family.” Combining old-school laughs with a massive influx of sci-fi-friendly guest stars (Leonard Nimoy! Stephen Hawking!) has turned out to be a successful equation for “Big Bang.” And if our calculations are correct, we’re 99.99% certain that Sheldon and Leonard will have plenty more seasons to argue over that roommate agreement of theirs. 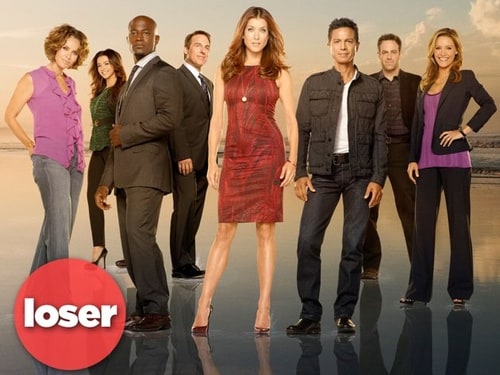 We had a feeling this “Grey’s Anatomy” spinoff would lose steam when it moved to Tuesday nights this fall, away from the “Grey’s” mothership. (It also wasn’t a great sign when series star Kate Walsh announced she was leaving.) And ratings have indeed flatlined this season, with “Practice” finishing dead last in its timeslot, leading ABC to mercifully cut the series short with a 13-episode final season. But maybe we’ll at least get a little McDreamy crossover action before the end, huh?
The last of the fall TV shows have finally premiered, so we’re ready to take stock of the new TV season’s hits and misses. Check out which shows are surging in the ratings this fall… and which are falling faster than the autumn leaves.

My Nominations for Oscar 2012 (Updated) by Hotton Machado

Every Movie I've Ever Seen by James B.

The Evolution of Spiderman by nehocb

MY CELLPHONE'S BEEN HACKED! by nehocb