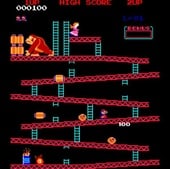 Donkey Kong is an arcade game that was released by Nintendo in 1981. The game is an early example of the platform genre as the gameplay focuses on maneuvering the main character across a series of platforms while dodging obstacles. The storyline is thin but well-developed for its time. In it, Mario (originally called Jumpman) must rescue a damsel in distress, Pauline, from a giant ape named Donkey Kong. The hero and ape went on to become two of Nintendo's more popular characters.
Prelude's rating:

This 1982 arcade game's basic concept is the same as Donkey Kong except the good guys and bad guys have switched places. The player controls Donkey Kong Junior, a small ape who must leap from platforms, climb vines, and avoid enemies to rescue Donkey Kong from Mario.

The third and final arcade outing for Donkey Kong, released in 1983, sees the giant ape once again cast as the enemy. Unlike the first two Kong games, the legendary character Mario (aka Jumpman) doesn't appear, with the player taking on the role of 'Stanley', a gardener who is armed with a bug spray with which he must destroy the swarms of insects that attack Stanley and try to steal his plants.

note: DK was the first game to take advantage of the Super Game Boy addon which allowed a few extra colors when hooked up thru a SNES. The video shows the enchanced version, and this screenshot shows original Game Boy version.

This list follows the evolution and titles featuring Donkey Kong.

For Mario-related series, see the following:

Fly the Friendly Skies: History of Flight Sims by Prelude

'All Aboard!' -- Train & Rail Simulators by Prelude