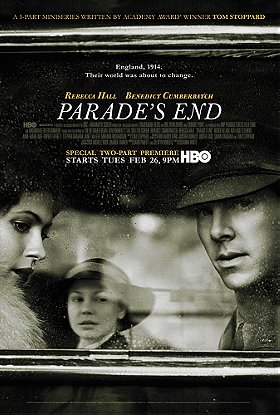 Story is set against the backdrop of WWI and follows Christopher Tietjens, a top civil servant from a background of wealth and privilege, whose marriage flounders almost as soon as it begins. He falls in love with another woman, but he remains honorable for some considerable time to Sylvia who has several affairs. On top of this, Chris is dealing with shell shock and partial memory loss that he endures during the war.
Release date: 24 August 2012
Tags: Drama (1), Action (1), UK (1), War (1), Hbo (1), 2010's (1)
My tags:

joannes2 voted for an image 5 days, 21 hours ago

Nusch added this to a list 4 years, 9 months ago

dandz added this to a list 4 years, 11 months ago
Watching my favorites: Benedict Cumberbatch (32 movies items)

SOph voted for an image 5 years, 5 months ago