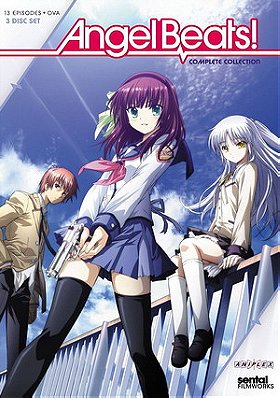 Indigo Kerenza
Maybe I'm over hyping this series for all that it's worth but this is an anime that made me laugh, then made me cry. It has great characters and I am surprised that I could become attached to them enough to cry at the ending in just 13 episodes. Truly exceptional. But it's downfall was it's messy plot. They didn't explain that you weren't supposed to know this stuff until the end so until you fini... read more
View all Angel Beats! reviews

guileion added this to a list 2 years, 8 months ago
Animation (82 tv items)

Paulo Júnior added this to a list 2 years, 10 months ago

Never More added this to a list 3 years, 1 month ago

Gaby Valeanu added this to a list 3 years, 2 months ago
Anime i have watched (193 tv items)

Pandoras Folly added this to a list 3 years, 11 months ago
My Favorite Anime Series/OVAs (314 tv items)

the count added this to a list 4 years, 9 months ago

"Number of episodes: 13 This is by many deemed as one of the best anime series of all time, and I tried to perceive it as such. I honestly did try my very best to be amazed by this one, but no matter how much effort I put into it, I just seemed to fail to see it as an epic anime. Unlike Another, which used it's small number of episodes to tell a single amazing contained story, this one just tries to put too much into itself, and that resulted with a mess. The story had potential, but it went all"