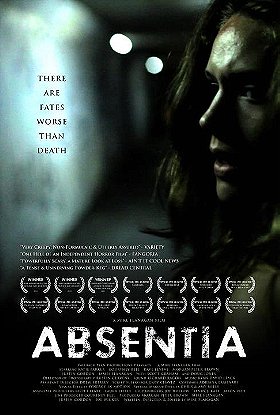 dappa1975
wow this film was good but it could have been so so much better - it really left me wanting to see more of the unseen... glad i watched it though as there is a lot of trash horror coming out still so this is a little gem. if I had got my wish and seen more of the dark side I would have rated it 4.5-5 stars..
View all Absentia reviews

Tricia's husband Daniel has been missing for seven years. Her younger sister Callie comes to live with her as the pressure mounts to finally declare him 'dead in absentia.' As Tricia sifts through the wreckage and tries to move on with her life, Callie finds herself drawn to an ominous tunnel near the house. As she begins to link it to other mysterious disappearances, it becomes clear that Daniel's presumed death might be anything but 'natural.' The ancient force at work in the tunnel might have set its sights on Callie and Tricia ... and Daniel might be suffering a fate far worse than death in its grasp.
Release date: 11 April 2013
Tags: Horror (8), Mystery (4), 2011 (3), 2010s (3), Sisters (2), Suspense (2), Thriller (2), Monsters (2), Drama (2), (2), Missing (2), Detective (2), Bridge (2), Husband (1), Disappearance (1), Tunnell (1), Drugs (1), Low Budget (1), Troll (1), Tunnel (1)
My tags:

DrLoomis added this to a list 7 months, 2 weeks ago
Horror Movies (627 movies items)

DrLoomis added this to a list 7 months, 3 weeks ago
Collection (2069 dvds items)

MovieCriticGamer added this to a list 1 year, 5 months ago

Texal added this to a list 1 year, 7 months ago
Conceptual horror (64 movies items)

kathy voted for an image 4 years, 1 month ago

rickterenzi voted for an image 4 years, 2 months ago

Kandi voted for an image 4 years, 2 months ago

xxxTheRipperxxx added this to a list 4 years, 2 months ago

" Directed by: Mike Flanagan Written by: Mike Flanagan Starring: Katie Parker, Courtney Bell, Dave Levine, Morgan Peter Brown, Justin Gordon, Doug Jones and James Flanagan. Distributed by: Phase 4 Films Plot: Just as a woman declares her husband "dead in absentia" after his being missing for 7 years, he inexplicably returns. However, whatever supernatural force that had taken him has come back with him. The Good: -Creepy atmosphere. -Complex and likeable characters. -Believable writing. -Feel"

Yorokobu added this to a list 4 years, 3 months ago

Dutchblack added this to a list 4 years, 4 months ago
Creature Features: A No Big Animals List (301 movies items)