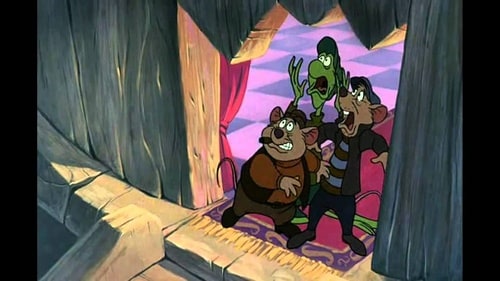 6.7
James and the Giant Peach (1996)
Poor, poor James. For some reason, horrible things happen to kids, in Roald Dahl stories.

This one is one is no exception. First James, is up rooted from an happy childhood, after his parents are killed by a rampaging rhino, then he is placed in care with the meanest aunts ever, then there is the mechanical shark, that tries to kill James, and his new found friends.
Agent Kermit D. Fonz's rating:

6.9
Homeward Bound: The Incredible Journey (1993)
I mean sure, they end up okay. But the journey is incredible and dangerous.
Agent Kermit D. Fonz's rating:

5.4
Care Bears Movie II: A New Generation (1986)
What do the Care Bears do for encore? Help save a kid, possessed by an evil villain named Darkheart.

Darkheart is pretty much light weight, compared to the Evil Talking Book, from part one. But still the Care Bears, have their work, cut out for them.
Agent Kermit D. Fonz's rating:

Yikes, there is the "scene".
Agent Kermit D. Fonz's rating:

Just don't tell the kids, about the possibile behind the scenes of the animals in the film!
Agent Kermit D. Fonz's rating:

6.4
Prancer (1989)
It takes the idea, of hard scrabbled, living on your last dime living pretty seriously given that Jessica and her dad, are almost depression era level broke.

And also, it's best not to think about the film's ending.
Agent Kermit D. Fonz's rating:

7.7
The Bear (1988)
Sure, it's about a cute bear cub, but it's also a cute orphaned bear cub, and one who is in constant danger of but being hunted, by hunters.
Agent Kermit D. Fonz's rating:

7
Batman Returns (1992)
More considerably violent, than Batman. Plus The Penguin is freaking terrifying.

Some how, MacDonald's Happy Meal Toys came out of this film.
Agent Kermit D. Fonz's rating:

He is a horrible person, and bad guy.
Agent Kermit D. Fonz's rating:

6.8
Hook (1991)
It's not as traumatic as say the Disney version, but still being kidnapped by pirates is not something you would want.
Agent Kermit D. Fonz's rating:

I'm not crying, you're crying.

7.1
Bridge to Terabithia (2007)
Regardless of the version, you watch it always ends the same way.

7.5
Batman (1989)
Not necessarily a family film, but however kids do love Batman.

It's violent and dark, and then there is The Joker.
Agent Kermit D. Fonz's rating:

7.8
Batman: Mask of the Phantasm (1993)
An animated Batman film? Sign me up! It's also pretty violent at times too.

You already know, how it ends.

The film never let's you forget that.

7.3
Peter Pan (1953)
There's Captain Hook and his non too subtle threat towards Tiger Lilly, and Tinker Bell, sure she gets killed off, and makes in the end, but still....

5.7
Babe: Pig in the City (1998)
The first film, was somewhat cute, the sequel however takes the whole cute thing, and then substitutes it for one heck of a dark, depressing film.

7.3
The Fox and the Hound (1981)
The cute, adorable fox and hound, are still going to be friends, even after every thing that happens, in this movie.

But it's all going to be okay in the end, isn't it? They're going to realize they can ignore their societal roles and love each other despite their differences?

Nope! The only happy ending here is that the former friends don't actually murder each other.
Agent Kermit D. Fonz's rating:

7.4
Pinocchio (1940)
Hey kids, behave and don't tell lies. Because, if you don't, you'll turn into a donkey, your nose will grow longer, and you might get eaten by a whale.

"You boys have had your fun," a shadowy figure yells at the new donkeys. "Now pay for it!"
Agent Kermit D. Fonz's rating:

6.8
All Dogs Go to Heaven (1989)
Right from the get go, the film is dark and depressing, the main character gets hit by a car and dies (don't worry, he's ok, and comes back ok), Charlie is a bit of a jerk and manipulates the poor girl, to no end, and there is a depiction of hell that is pretty heavy, even for a kids film.

There is also a fair amount of violence, and shooting as well.
Agent Kermit D. Fonz's rating:

7.7
Coraline (2009)
The alternate world, that Coraline visits and discovers that nearly everyone, and I mean nearly EVERYONE, are puppet/dolls with button eyes, is the stuff that nightmares are made of.

How is this not, a David Lynch film?
Agent Kermit D. Fonz's rating:

6.9
The Chronicles of Narnia: The Lion, the Witch and the Wardrobe... (2005)
The BBC version, wasn't nearly as dark as the theatrical version, I still like this film, but I have to admit, it could be a bit much at times, from Tilda Swinton's portrayal of the White Witch, to the battle scenes (which thankfully for kids, are too brutal), and Aslen's "death scene".

What? Did you "really" think that he would be killed off for real? Besides, there still the sequels to go!
Agent Kermit D. Fonz's rating:

7.8
Willy Wonka and the Chocolate Factory (1971)
To this very day, the boat ride scene, scares the hell out me, even after the millionth viewing.

Also, demises of the kids, were a bit much to take, even if arguably, they were "asking for it", for not paying attention to the rules. But don't worry, they turn out okay in the end, horribly and mentally scared in the end, but still okay. Kind of sort of.

And also Grandpa Joe, comes off as kind of a jerk.
Agent Kermit D. Fonz's rating:

6.6
Charlie and the Chocolate Factory (2005)
The chocolate factory, in the film is less of an awesome place to be visiting and more of a lawsuit just waiting to happen.
Agent Kermit D. Fonz's rating:

7.2
Dumbo (1941)
The scene in which Mrs. Jumbo, attacks the kids for attacking Dumbo, and is imprisoned for her troubles, is one of the most heart breakingly sad moments of all time. Lesson learned? Kids (but not all kids), can be unreasonably cruel.

The pink elephants? Now, that's a different story, all together.

Also, for some the birds in the film, are uncomfortable stereotypes.
Agent Kermit D. Fonz's rating:

6.7
Pete's Dragon (2016)
It's considerably somber, the bad guys motives are less than subtle, and child abandonment takes center place in the film.

But at least, the dragon is cute.
Agent Kermit D. Fonz's rating:

7.4
Labyrinth (1986)
It's one of my favorite kids movies, for me, the scary parts were the Eternal Bog of Stench, the wall of arms, the trash lady, who reminds kind of Aughra, and the giant metal ball of death.

Now, I think of the film, as an odd combination of Muppets and Monty Python, which only seems fitting, since Terry Jones, co wrote the film. That and the puppets, the music, and David Bowie, are some of my favorite parts about the movie.
Agent Kermit D. Fonz's rating:

7.8
Shrek (2001)
Duloc, a theme park run by a megalomaniacal ruler. Guess what it's based on?
Agent Kermit D. Fonz's rating:

7.4
The NeverEnding Story (1984)
As a kid, when I first saw the film, I had a love hate relationship, with the movie.

1) The scene where Artax drowns in the Swamp of Sadness, and Atreyu is helpless to stop it from happening.

2) The moment where the knight, gets obliterated by lasers, and you see his smoldering corpse.

4) But the cherry, on the top of the delicious sundae, is the film's bad guy. The Nothing. It's not a great monster, or a radioactive lizard. Ir's living, breathing, ominous, sentient, cloud of nothing.

Destroying everything in it's path, and reducing the place to oblivion.

Now, I like watching the movie, but back then you couldn't pay me to watch it again.

8
Zootopia (2016)
Gentrification, racism, and classisim, are somewhat undercurrents in the film.

Think of it as Chinatown, by the way of cute, cuddly, animals.
Agent Kermit D. Fonz's rating:

Even if a meteor, barely misses the Earth.
Agent Kermit D. Fonz's rating:

7.3
Bambi (1942)
In the history of film characters, there has been evil villains, but few are as evil and douchey as Man.

Not just any Man, but the Man in the film, Bambi.

Not only does Bambi's mom get shot, but the whole forest gets burnt down too.

The first part of the movie, is cute and cuddly, and then suddenly....
Agent Kermit D. Fonz's rating:

7.2
The Dark Crystal (1982)
As with The NeverEnding Story, I had a love hate relationship, with this movie.

For many, many, mean, reasons. First, there is the Skeksis, then there are scenes were the Podlings, get tortured, then there is a dinning room scene, and the Garthim.

To, me back then, the movie was like one big, Muppet filled snuff film.

Oh, they definitely got the dark part, of the title right.
Agent Kermit D. Fonz's rating:

The stuff that fricking nightmares, are made of! Remember at the end of The Wizard of Oz?

Wellllll, supposedly, after she told Auntie Em and Uncle Henry, about her "adventures", they, did what any reasonable people would do. Had poor Dorothy, locked away where she was about to undergo, electro shock therapy.

Luckily, Dorothy, goes back to Oz, only to find it over run by Wheelies, ruled by the Nome King, and an evil head obsessed Princess, and her friends turned to stone.

How do we know, that Dario Argento, wasn't the one who really directed this film?
Agent Kermit D. Fonz's rating:

6.6
The Polar Express (2004)
There is CGI animation, and then there the cold, lifeless, animation, in this movie.

7.6
The Secret of NIMH (1982)
The great thing, about this film is doesn't go for the creeps, half way. No, it goes the full way, straight from the beginning.

Characters are put in peril, the blood and deaths, even for a animated movie, are very much realistic, the bad guys are as menacing as all get, the baby mouse is near death, and as a kid, I wasn't ready for just how dark, and gritty, the film could get.

The sequel? Now, that's a very different nightmare all together, one that may never recover from, after seeing the movie.
Agent Kermit D. Fonz's rating:

6.1
The Gate (1987)
A fun, but also really weird film, the small demon like creatures and the scene where one of the kid's parents show up, but turn out to be monsters, are just some of the odd things, that in this movie.
Agent Kermit D. Fonz's rating:

6.9
Matilda (1996)
Matilda's parents, are probably not going to win any parent of the year awards any time soon.

Come to think of it, Miss Trunchbull won't be getting the teacher of the year award, any time soon, either.
Agent Kermit D. Fonz's rating:

Well, you might want to look, else where. No, really, I mean it.

A look at family films, that on second glance, are harsher than they appear, and could give Wes Craven, nightmares.

Along, with my take on the films, if I have seen it.

I also have a few films, I adding along as well.

My favorite Horror movies by decade v.2.0 by the giraffe

The 100 most handsome men of all time by beautifulhollywood

My Overrated Films by garfield2710