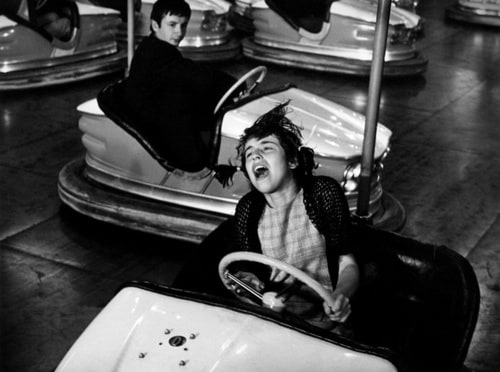 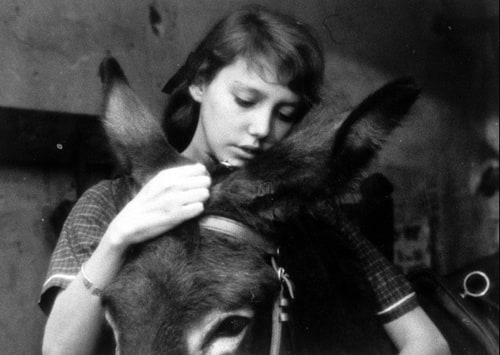 Now here is the essential part. Bresson suggests that we are all Balthazars. Despite our dreams, hopes and best plans, the world will eventually do with us whatever it does. Because we can think and reason, we believe we can figure a way out, find a solution, get the answer. But intelligence gives us the ability to comprehend our fate without the power to control it. Still, Bresson does not leave us empty-handed. He offers us the suggestion of empathy. If we will extend ourselves to sympathize with how others feel, we can find the consolation of sharing human experience, instead of the loneliness of enduring it alone. - Roger Ebert

People speak sometimes about the "bestial" cruelty of man, but that is terribly unjust and offensive to beasts, no animal could ever be so cruel as a man, so artfully, so artistically cruel. - Dostoevsky

Orson Welles once said of Bunuel, "he is a deeply Christian man who hates God as only a Christian can." In that regard, Le Diable Probalement may be one of Bresson's most Christian films, or maybe he hates humanity only as a humanist can.

I'm sure Charles and Mouchette's stories are intended to be parables, but I'm unsure to what degree if any they are christ-like figures. 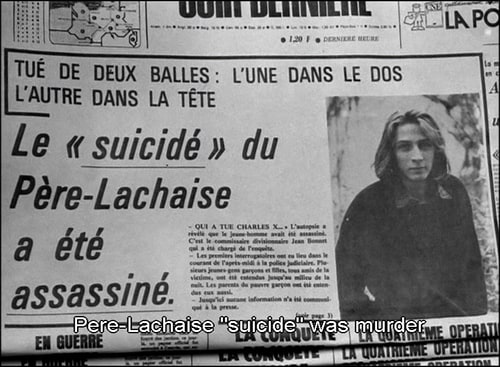 The headline implies a martyrdom that goes unnoticed; unlike in Mouchette there is no ironic and transformative music when he kills himself. Bresson identified as a believer, but said no one knows what happens after death and redemption must be found in life. 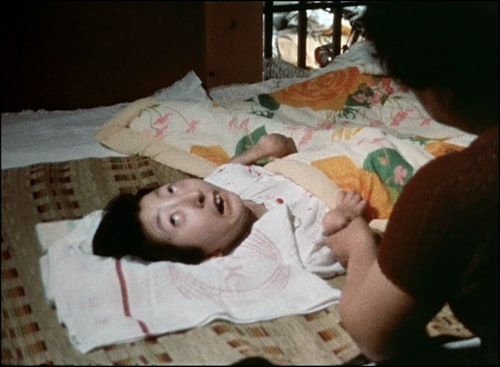 Charles didn't see the documentary being made about victims of pollution, but he was undoubtedly aware of human suffering caused by crassness (perhaps Bresson was commenting on the mean world syndrome); when he walks by the people getting riled up to destroy the system out of wanton boredom, he is disgusted by these faux-idealists who are living and rebelling just like the powers that be want. 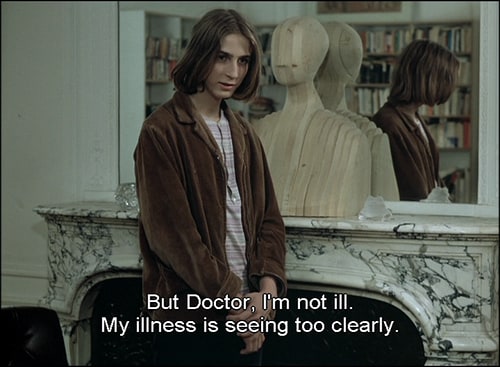 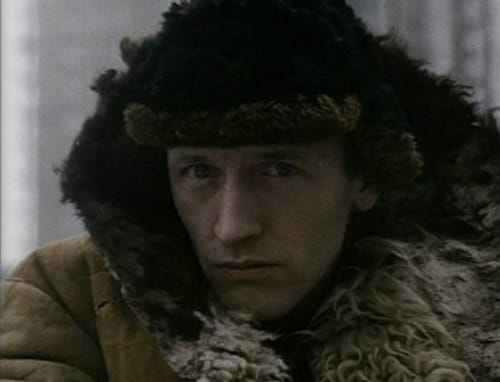 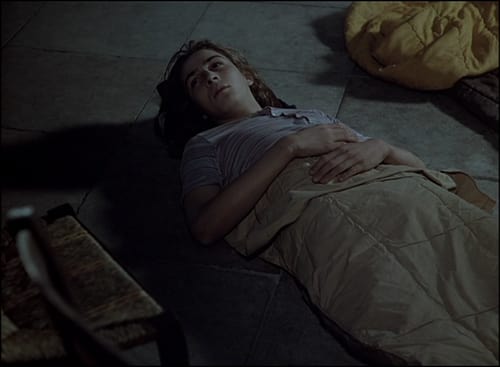 Like the unnamed man in Dekalog who can only look on the apartment resident's lives, Charles is unable to help the world meaningfully; I doubt he would if he could. Money, religion, and politics are empty pursuits for him. 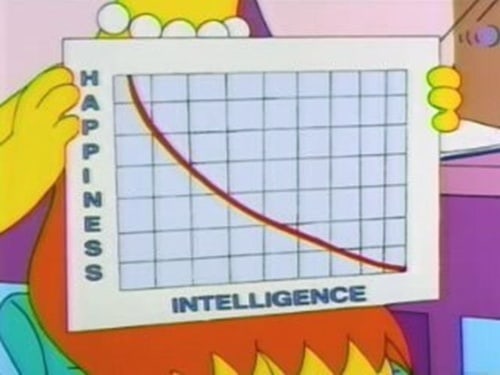 I know I'm more intelligent than the others. I'm perfectly aware of my superiority. But if I did anything, then I'd be useful in a world that disgusts me. - Charles

My reaction to these problems is to not let myself get sick over things I can't plausibly change, lest I be crushed by them. He should have listened to his psychoanalyst.

He is clever but he probably overestimated his moral intelligence; through his narcissistic sense of martyrdom and intellectual and ethical superiority, Charles gave himself much more leeway, and was hypocritically much more critical, demanding, and unforgiving of others' offenses. If he had such a good heart he could have shown it. 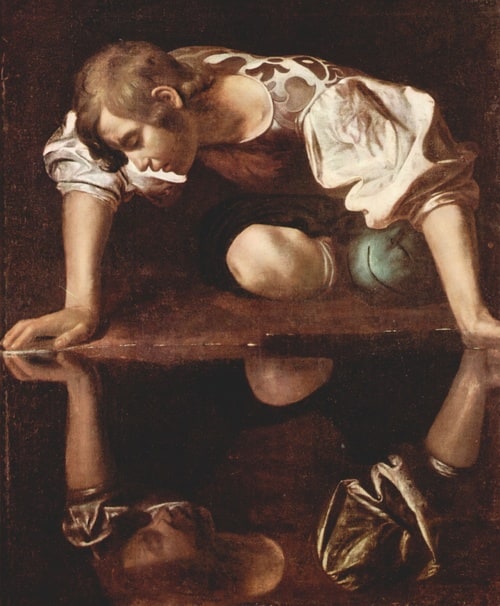 Oscar Wilde said provocatively in response to the ancient Greek aphorism 'know thyself', with, "Only the shallow know themselves," and later wrote gleefully about superiority of sensibility or 'style' over morality; he also wrote in Phrases and Philosophies for the Use of the Young, "To love oneself is the beginning of a life-long romance." Wilde struck me as a sincere humanist and romanticist, but also a witty provocateur who often made ironic and flippant statements. I agree, and I suspect Wilde agrees with those words in spirit, but not to the letter.

Wilde's more serious writing reveals he values integrity; Wilde's words would possibly point to a more satisfying solution to Charle's problems and provides some reassurance and consolation, unlike his possibly Jungian psychotherapist.

Selfishness is not living as one wishes to live, it is asking others to live as one wishes to live. And unselfishness is letting other people's lives alone, not interfering with them. Selfishness always aims at creating around it an absolute uniformity of type. Unselfishness recognises infinite variety of type as a delightful thing, accepts it, acquiesces in it, enjoys it. It is not selfish to think for oneself. A man who does not think for himself does not think at all. It is grossly selfish to require of one's neighbour that he should think in the same way, and hold the same opinions. Why should he? If he can think, he will probably think differently. If he cannot think, it is monstrous to require thought of any kind from him. A red rose is not selfish because it wants to be a red rose. It would be horribly selfish if it wanted all the other flowers in the garden to be both red and roses. - Oscar Wilde, The Soul of Man under Socialism 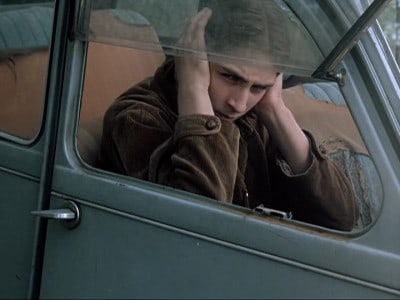 Robert Bresson's Le Diable probablement . . . is the most shattering film I've seen this Berlin Festival. I think it's a major film [...]. [I]n the future---and this world will probably last for another few thousand years---this film will be more important than all the rubbish which is now considered important but which never really goes deep enough[.] The questions Bresson asks will never be unimportant. - Fassbinder 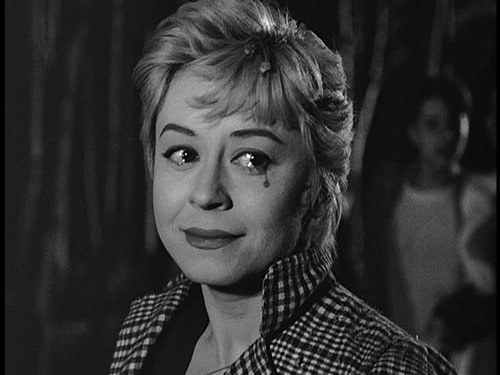 Masina turns toward the camera and her glance crosses ours ….The finishing touch to this stroke of directorial genius is this, that Cabiria’s glance falls several times on the camera without ever quite coming to rest there….Here she is now inviting us, too, with her glance to follow her on the road to which she is about to return. The invitation is chaste, discreet, and indefinite enough that we can pretend to think that she means to be looking at somebody else. At the same time, though, it is definite and direct enough, too, to remove us quite finally from our role of spectator. - André Bazin

Fellini prefigures Masina's betrayal with the very first scene, but I didn't see it coming or want it to be true. She encounters probably love of her life, only to discover he's a con-man who planned on pushing her off a cliff for her money. The betrayal was so cruel she ends up begging for death and in a daze she winds up surround by a festive group of people indifferent to her suffering, and some undoubtedly mock her with their happiness and schadenfreude, like that bastard guitar player.

Nina Rota's wonderful music swells and indeed Bazin is right Masina glances at us invitingly. Life is bittersweet but she won't be defeated. To quote Bukowski, "It's the only good fight there is."
Mr. Saturn's rating: 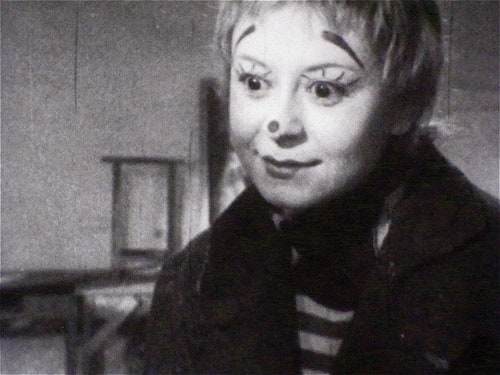 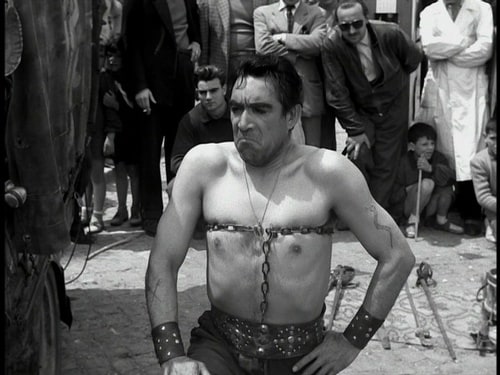 Zampanò and Gelsomina are two of my favorite characters, in part because they represent two distinct parts of myself. I cried when Gelsomina looks at the disabled child with awe and empathy, and at the cruelty of Zampanò who stoic and tough, and possibly because he's unable to love, despite desperately needing it.
Mr. Saturn's rating: 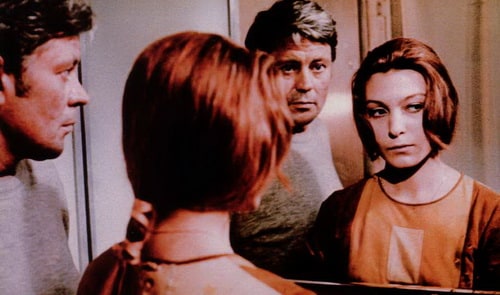 The movie Solaris has a space station, it takes place near another planet, but actually it's a mediation on the human individual and not really a space opera at all. Do we see other people as they are, or do they exist for us only in our ideas about them. The planet can read the man's mind and reproduce his dead wife, but as he looks at the reproduction he grows depressed because he questions how well he really knew her in the first place. The planet cannot supply what's not there in his mind. The movie is quiet and creepy, thoughtful and very moving about the subject how well we can ever really know one another. - Roger Ebert's review of the Solaris remake (applicable to the original film) 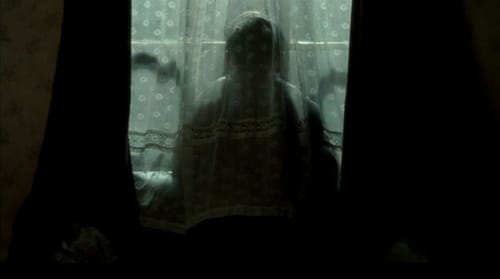 This is essential viewing for anyone who had a troubled gay childhood.
Mr. Saturn's rating: 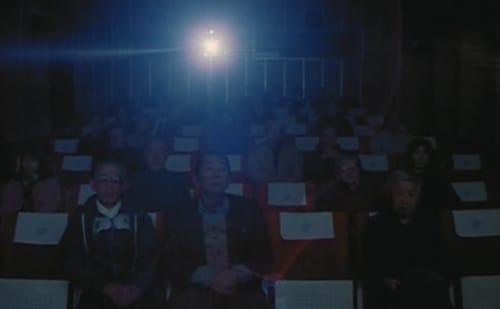 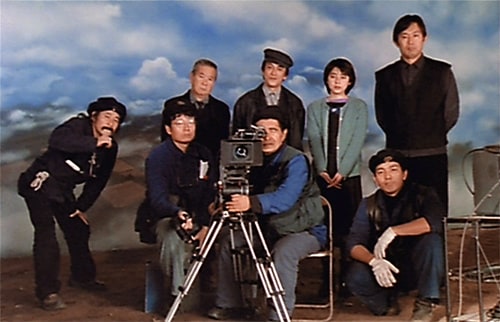 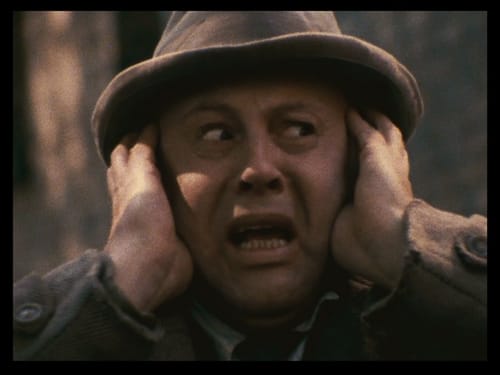 This epic was worth watching.

I share many of Franz's foibles, particularly his naivete; his quixotic quest to be a decent man like everyone was foolish (e.g. he became a Nazi), but what spoke to me the most was his breakdown. 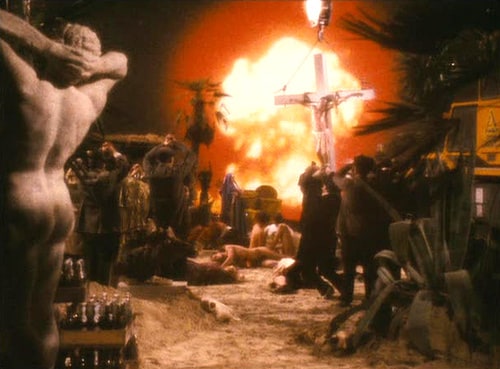 He imagines life to be a slaughter, and imagines being the cattle and the slaughterer. The climax of his madness is a mock crucifixion. I realized begrudgingly, carrying the worst things that happened to me around made me sanctimonious, egocentric, and churlish. Like Franz, I was a little slow to realize these things.
Mr. Saturn's rating: 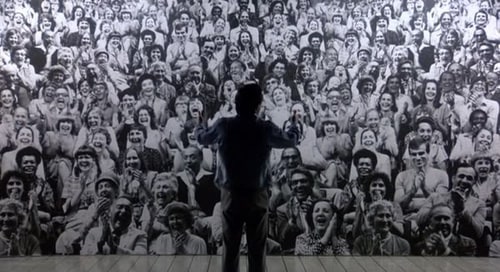 Pupkin has a gaudy fantasy about marrying his high school sweetheart on national TV; he ungraciously accepts the apology of everyone who's wronged him, who were put in their place through Pupkin's marvelous fame. This film helped subdue the delusions I had about getting famous and showing 'em all, and I'm grateful for it.
Mr. Saturn's rating: 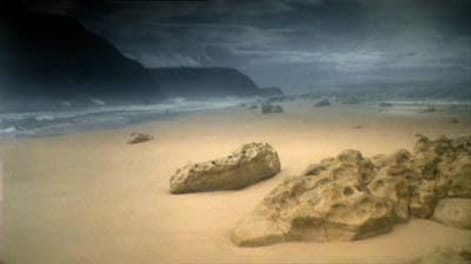 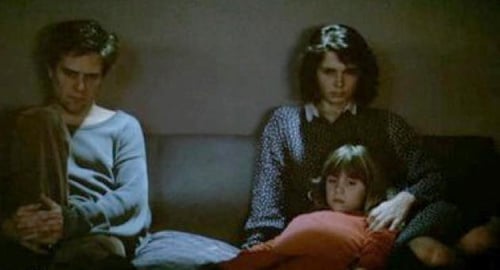 Welcome to the NHK represents life as a shut-in or hikikomori to a tee because the author was one. It made me look hard at where my life is leading. 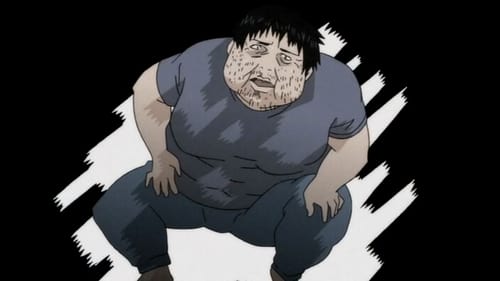 I didn't include Tatami Galaxy in this list because I've matured enough beforehand to realize reliving the past or potential pasts are hell.
Mr. Saturn's rating: