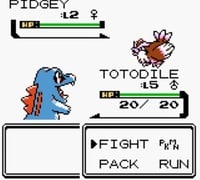 
I really said what I want about Pokemon Gold and Silver in the entry below with Pokemon Gold. So, for this entry, I'm just going to list off some of the new features for these two games, so you can get an idea of some of the good additions to the already great formula established in Pokemon Red and Blue. Aside from the addition of various new Pokemon to find and collect, Gold and Silver introduced the ability to breed Pokemon, which was about as addicting as wandering around and searching for Pokemon in the wilderness is. A time system is also introduced, using real time to influence certain events and Pokemon appearances. These additions add some variety to collecting Pokemon and help the games feel fresh in comparison to the previous generation Pokemon games. If you're not a Pokemon fan yet, the Gold and Silver versions may be able to convert you into one.
ape's rating: 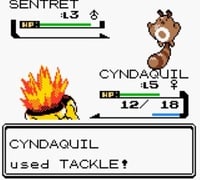 
Owners of Pokemon Red, Blue, and Yellow may had thought that they caught 'em all, and then Nintendo released Pokemon Gold and Silver, with 100 new Pokemon to collect and a few new gameplay elements that improved upon an already addicting game style established in the original Pokemon games. If you loved the original Pokemon games, you'll easily love this one as well. It's worth noting that the differences between the Gold and Silver versions is minute. The only reason for Silver being above Gold in this list is my preference in the Pokemon types gracing the cover...Scientific reasoning, I know.
ape's rating: 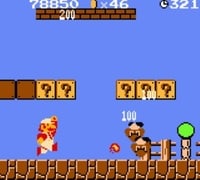 
Super Mario Bros. Deluxe is an enhanced version of the original Super Mario Bros., in handheld form. It has various new features and the like, including a nice save feature, to keep even veteran Super Mario Bros. players coming back for more. Also new is an interesting change in camera, as the camera is zoomed in, making stuff above and below Mario out of view at times. The zoomed-in camera in itself isn't a major change, but it can feel like it is when you play. The best part of this game is that once you obtain 300,000 points, you unlock the Lost Levels, basically making this two great platformers in one portable package.
ape's rating: 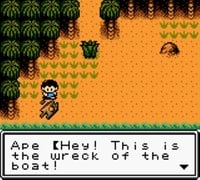 
Survival Kids is all about surviving on a deserted island after your boat wrecks. If the concept sounds familiar, Survival Kids is the game that came before the Lost in Blue franchise, and is similar to those titles. Survival Kids may be a little slow-paced for some, but I found it to be a relaxing experience to wander around the island, looking for supplies to stay alive. The game itself is very solid and works well on a portable. If you've got the patience for the slow pace of the game, you'll be rewarded with a very solid experience for your Game Boy Color.
ape's rating: 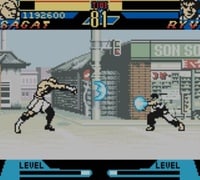 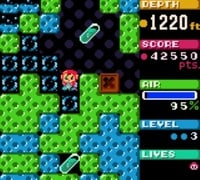 
Mr. Driller's formula works well in this 8-bit portable version of the Arcade/Playstation/Dreamcast game of the same name. The handheld hardware doesn't hold the quality of this game back much at all, making this a fantastic, portable version of the addicting Mr. Driller gameplay you may have grown to love on consoles or in the arcade. If you like Mr. Driller, and have a Game Boy Color, this is a must-buy title.
ape's rating: 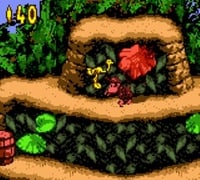 
Donkey Kong Country is about as close to getting an 8-bit version of the 16-bit platformer as possible. Obviously, it's not as pretty as the original was, but just about everything from the console version made its way here. If you couldn't get enough Donkey Kong Country, and didn't mind sacrificing the beautiful visuals in order to play it on the go, this Game Boy Color version was quite good...Though portable gaming fans only had to wait a few more years and they got the Super NES game ported to the Game Boy Advance. But still how well the game was translated to 8-bits from 16-bits is quite impressive. 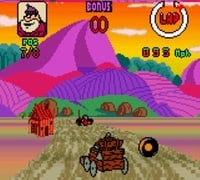 
For those not in the know, Wacky Races is based off of the Hannah Barbara cartoon of the same name, and this game contains several of the popular characters from that show. That said, I'm kind of surprised at how well-done this kart racer was done on an 8-bit handheld like the Game Boy Color. It's not a masterpiece by any means, but it's still a solid little racer. Like I said, it's not the best racing game out there, but it's definitely a worthwhile game for fans of the racing genre, especially if you'd like an 8-bit, kart-style racing game on the go.
ape's rating: 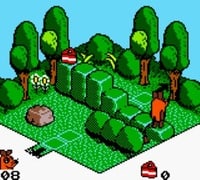 
Die Maus is an interesting action-oriented puzzle game that involves a mouse and an elephant searching for a duck...As odd as that sounds, the gameplay isn't bad. Your goal is to traverse through levels, switching between the mouse and elephant to overcome obstacles preventing you from reaching the end. If you see something heavy, your best bet is to push it with the elephant. Need to hop across something, and you're better off using the mouse. The skills of both animal are more than those mentioned above, but you get the idea. Tag team your way through the game. It's a decent game, though nothing worth going out of your way to play.
ape's rating: 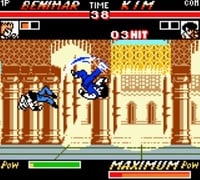 
Super Fighters is a bit of an unknown. I can't find any information on it regarding publisher, developer, or release date...I'm not even sure if Super Fighters 99 is its actual name or not. I think it may be a bootleg due to the fact that the game contains King of Fighters/Fatal Fury characters...and at the time, SNK had this thing called the Neo-Geo Pocket Color, which was attempting to compete with the Game Boy Color. But anyway, regardless of what it is, it's fun...Like most handheld titles in the King of Fighters/Fatal Fury universe seem to be.
ape's rating: 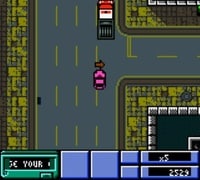 
The impressive thing about Grand Theft Auto on the Game Boy Color is that it's a pretty good conversion of the Playstation game of the same name. The negative thing is that the original Grand Theft Auto, while passable, isn't exactly the best-made game in the world. But still, if you're a fan of the original, top-down Grand Theft Auto, then this portable version is like a dream come true.
ape's rating: 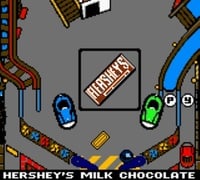 
3D Ultra Pinball: Thrillride lies to you. The game is not a thrillride. It's not 3D. The only thing ultra about it is that it's an ultra sellout to Hershey products. The only honest thing about the title is that it's a pinball game...Though not a particularly good one. The gameplay is boring, without a whole lot of interesting tidbits going on other than you simply trying to prevent your ball from falling beneath the bumpers. There's better alternatives on the Game Boy Color for your pinball needs, so I wouldn't even bother with this one unless you're a pinball nut and absolutely must play every pinball game that you find.
ape's rating: 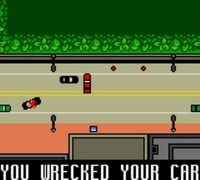 
Driver was great on the Playstation...Not so much in this portable version of the game, which takes the top-down approach of the early Grand Theft Auto titles. The problem is that Grand Theft Auto had come out a few months earlier on the Game Boy Color and is better in just about every aspect to this game. The game itself is still not very good, which makes the fact that it's inferior to an already-released game even worse. There's absolutely no reason to play this game. If you're looking for this style of gameplay, get Grand Theft Auto.
ape's rating: 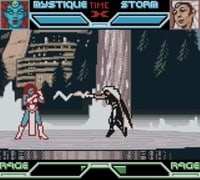 
Crawfish Interactive did such a great job developing Street Fighter Alpha, so it's a head scratcher as to why X-Men: Mutant Academy is so bad. When I crouch down and rapidly press the punch button, I don't expect the computer to just walk right in and get crotch punched to death...But that's what happens in this game, all the way up to and including the final boss. When I can look away from the screen during the entire fight and still walk away with a perfect victory, something is horribly wrong here.
ape's rating: 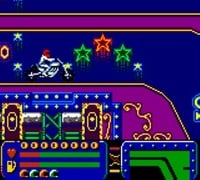 
If I think of a game starring Evel Knievel, I'd imagine a game similar to Excitebike, except with the track replaced with stunts...Or even a racing game with stunts all over the track. Rockstar took a different approach - an obstacle course and your goal is to not crash. By tweaking your bike prior to entering a track, you have to try to make your way to the end without wrecking...The problem is that it's a trial and error process, and how the game is set up, that process takes forever to do. You're probably going to either get frustrated or bored before long after starting this game. It's best to just stay away.
ape's rating: 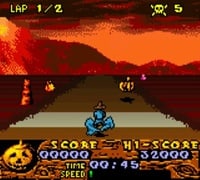 
Wanna play a boring kart racer? One that offers no challenge that you could probably beat in your sleep? What about a game where you race as a witch on a broomstick? Eh, one out of three ain't bad. Anyway, Halloween Racer is a pretty terrible racing game...It's so bland...It's like kids came trick or treating at the office of the developers and instead of getting a treat, they gave the kids a trick in the form of this turd of a game.
ape's rating: 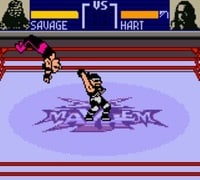 
Maybe I'm missing something - most reviewers seemed to enjoy this game when it came out...I'm not seeing it. WCW Mayhem is a sloppy wrestling game. It has some neat ideas to make it stand out, like the ability to take the brawl to the backstage area, and an arcade-like fighting engine with over-the-top moves like the spinning piledriver you may have seen Zangief use in the Street Fighter games...However, these ideas don't make up for the sloppy fighting that takes place between the bells. I'll probably revisit this game again down the road to make sure I didn't miss something that the reviewers back in 2000 saw, but for now, I consider this to be a very poor wrestling title.
ape's rating: 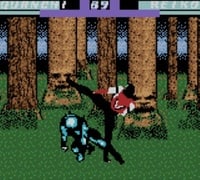 
It's games like Mortal Kombat 4 that made me shy away from handheld gaming for a long time. One would expect that a handheld game with the same name as a game found on a console would be a portable version of that game. Games like Street fighter Alpha have proven that even 32-bit fighters can be successfully translated to an 8-bit handheld...Mortal Kombat 4 miserably fails at this. Mortal Kombat 4 on the consoles in itself wasn't really a great game, but it looks like the greatest fighter ever in comparison to the handheld version of MK4. Everything is sloppy and broken...Almost like the developers performed a fatality on it during development.
ape's rating:

I'll be doing lists like this for all systems eventually. As I play games for the system, I'll add them to the list. They're ranked by my own personal preference, so keep that in mind if you can't figure out why game A is ranked above game B.

For release date info, I took the first release date and included the region the date comes from. Here's the key for that: NA - North America, JP - Japan, EU - Europe, AU - Australia

This is a work-in-progress list. Since I'm currently mowing through portable fighting games, I thought I might as well rank them as they're fresh in my mind. Other games shall be added later.

Developed by: Monolith Soft by CelShader

Games of 1978 and Earlier - ranked by preference by ape