8.3
Lost (2004)
•S01-E01: Pilot
Morgan Steig is passenger number 108.
•S01-E06: The Cure
The technical expert in the illegal laboratory has the same name as Lost writer/producer Elizabeth Sarnoff.
•S01-E09: The Dreamscape
The plane ticket Olivia finds in Mark Young's apartment is for a flight on Oceanic Air. It was an Oceanic flight that crashed on the island in Lost.
•S02-E02: Night Of Desirable Objects
All the numbers appear throughout the episode.
•S02-E19: The Man From The Other Side
A scene from Lost (Season 1) can be seen in the TV interference from the parallel universe. The scene was deleted in our universe, but appears to have aired in the alternate universe. 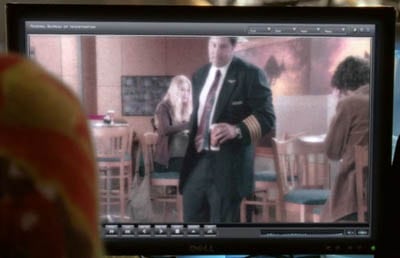 •S03-E19: Lysergic Acid Diethylamide
William Bell pours a glass of 60 year-old MacCutcheon Scotch Whisky after Walter and Peter join him in his office. MacCutcheon is a ficticious brand name used by Bad Robot Productions and made popular on Lost. 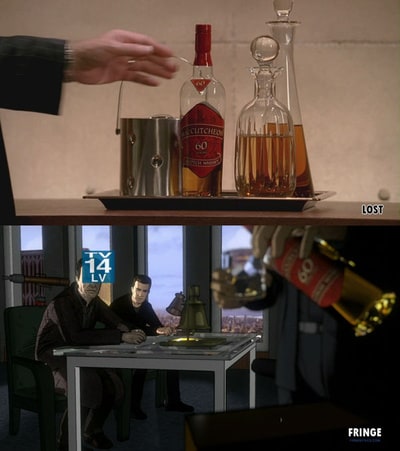 When Walter wakes up, there's a close-up of his right eye. This kind of close-up was often used on Lost.

7.8
Frankenstein (1931)
•S01-E01: Pilot
Peter says to Olivia: "You're telling me, what, my father was Dr. Frankenstein?", referencing the book by Mary Shelley, Frankenstein or The Modern Prometheus. The story is about Doctor Frankenstein who creates a living being out of the parts of dead people.
•S03-E09: Marionette
After learning of the theft of Amanda Walsh's corpse from the funeral home, Walter notes that grave robbing was a common practice in the early days of modern science and medicine. He adds that the practice inspired the well-known gothic novel. 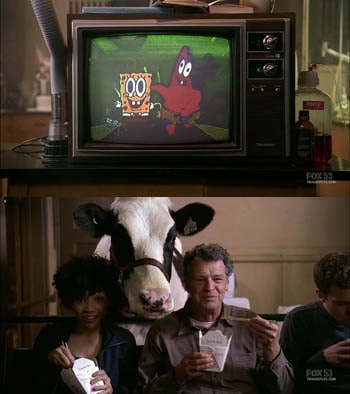 6.9
20,000 Leagues Under the Sea (1916)
S01-E02: The Same Old Story
When Walter mentions Jules Verne, Peter asks: "20,000 Leagues Under The Sea Jules Verne?", but Walter answers he was thinking about another novel by Verne, The Kip Brothers. This novel featured solving a crime by obtaining a latent image from the retina of the murder victim.

7.1
Silver Surfer (1998)
S01-E04: The Arrival
In the Marvel Comics, The Watcher is a powerful but enigmatic bald humanoid alien whose purpose is to observe and record events of significance without interfering.

The Watcher from the cartoon Silver Surfer 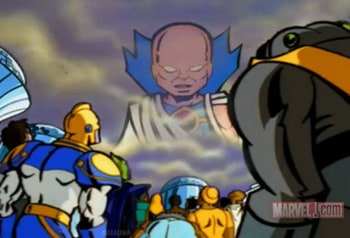 7.9
Harvey (1950)
S01-E04: The Arrival
Peter says to Walter: "Your friend, he's a tall fellow, right? Pink, big fuzzy ears?"
In the movie Harvey, the main character, Elwood P. Dowd, claims to have an invisible friend that takes the form of a 6 foot tall pink rabbit which only he can see.

7.6
Alias (2001)
•S01-E07: In Which We Meet Mr. Jones
The local agents working for Loeb are Coscarelli and Scrimm. Don Coscarelli directed the movie Phantasm (1979), which featured Angus Scrimm as the villainous Tall Man. Scrimm had a recurring role as an interrogator on Abrams' show Alias.
•S03-E15: Subject 13
Young Olivia is asked to put together a block puzzle similar to the one that Sidney Bristow was able to solve in Alias, it was called "The Indicator".
Like Olivia, Sidney was also part of a secret training program ("Project Christmas") as a child and had no recollection of it. 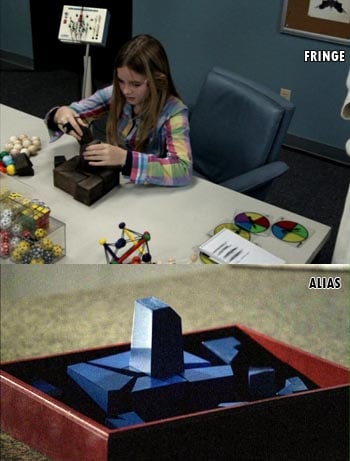 7.4
Happy Days (1974)
S01-E08: The Equation
After Walter cuts Peter's sleeves while he's unconscious, Astrid calls him Chachi, like the character from Happy Days.

Chachi vs. Peter, Who Wore It Better?

4.6
The Island of Dr. Moreau (1996)
S01-E13: The Transformation
A novel by H. G. Wells from the late 1800's were human-animal hybrids were created by the eccentric Dr. Moreau, not dissimilar to the activities Conrad Moreau engaged in during this episode.

8.3
Star Trek (1966)
•S01-E14: Ability
Dunham characterizes Jones escape as having "Star Trek'd" himself out of a maximum security prison. Teleportation is a science-fiction theme made popular by the Star Trek television and movie franchise.
•S01-E19: The Road Not Taken
Emmanuel Grayson has the same last name as Spock's mother, and makes references to the Star Trek franchise.
Grayson is played by Clint Howard, who appeared in the original series, Deep Space Nine, and Voyager as different characters.
Grayson's apartment address is 1701, a reference to the Enterprise's ID number. 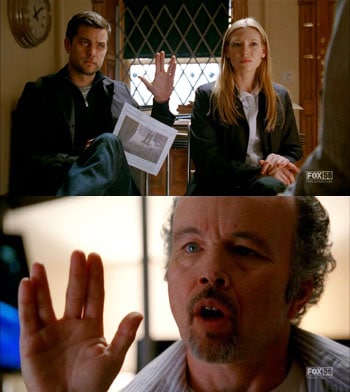 6.5
Nellie the Elephant
S01-E17: Bad Dreams
In the beginning of the episode, a mother sings Nellie The Elephant to her daughter.

6.7
The Hunger (1983)
S01-E18: Midnight
Both begin with the song Bela Lugosi's Dead by Bauhaus. Both have killers who drain their victims' fluids (spinal cord fluid in Fringe, blood in The Hunger) and meet their victims in nightclubs.

7
Cloverfield (2008)
•S01-E19: The Road Not Taken
Walter drinks Slusho, a ficticious brand name repeatedly utilized by Bad Robot Productions.
The Slusho drink was first mentioned in the second episode of J.J. Abrams' Alias. Later was part of the Viral Marketing leading up to Cloverfield and the name was also the fake title given to the movie while filming to keep it secretive. Also the main character of the movie, Rob Hawkins, was about to move to Japan after being hired by the company that created Slusho. 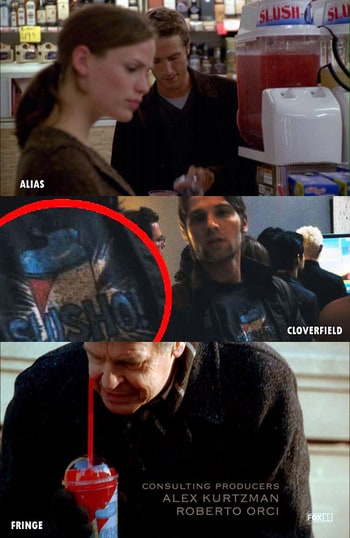 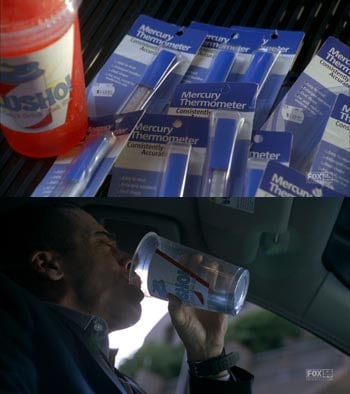 •S02-E07: Of Human Action
Slusho is for sale in the convenience store. 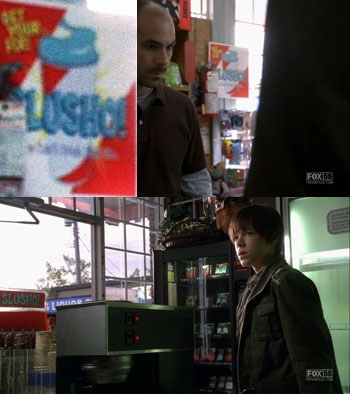 •S02-E16: Peter
Slusho is available at movie theaters in the alternate universe, circa 1985. 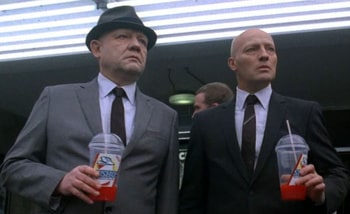 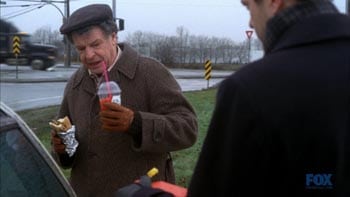 7.8
Ghostbusters (1984)
S01-E19: The Road Not Taken
As Peter, Walter, and Olivia are investigating Susan Pratt's charred body on the street, Peter comments: "When there's something strange in your neighborhood...", and Walter continues: "Who you gonna call?"

6.1
Firestarter (1984)
S01-E19: The Road Not Taken
As Walter brings up the idea of pyrokinesis, Peter mentions Stephen King having coined the phrase in his book-turned-movie Firestarter.

8
The Wizard of Oz (1939)
•S01-E20: There's More Than One of Everything
Charlie says: "You're saying that William Bell disappeared into a different universe? Like Dorothy going to Oz?"
•S02-E12: Johari Window
Walter, intimidated by his recent kidnapping and drugging, wants to stay in the car, then shares that the Cowardly Lion had a point about cowardice. Peter assures him there are no Flying Monkeys where they are going.
•S03-E09: Marionette
Walter refers to the literally heartless cadaver he is studying as Tin Man, referring to the heartless character from the famous novel/movie.

7.9
The Grateful Dead (1977)
S01-E20: There's More Than One of Everything
There is a picture of Jerry García from the Grateful Dead in Bell's office, a musical group well-known for its association with LSD.

6
Asterix and the Vikings (2006)
S02-E01: A New Day In The Old Town
Walter confuses Astrid's name and calls her Astérix.

8.6
The X Files (1993)
•Both series have FBI agents investigating bizarre cases.
•S02-E01: A New Day In The Old Town
Inside Lloyd Parr's apartment, the episode Dreamland from The X-Files can be seen on the TV. 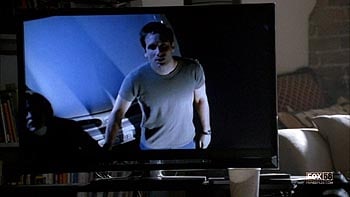 Senator Kennedy Taylor at the hearing mentions "unsubstantiated alien invasions" and "the old 'X' designation" of the FBI; and the actor playing the Senator Taylor, Ken Camroux, had a recurring role on that show.
Tegan Moss, who plays Rebecca, also had a recurring role on the series as Young Dana Scully.
•S02-E06: Earthling
The hospital interior is where the The X-Files Pilot and The X-Files: I Want to Believe were shot.

8.5
Back to the Future (1985)
•S02-E02: Night Of Desirable Objects
The experiment that Astrid and Walter are working on with the car and frog mimics the experiment Doctor Emmett Brown used in the movie to illustrate how a Delorean car would/could travel back in time.
•S02-E16: Peter
The movie theater marquee in the alternate universe displayed Back to the Future starring Eric Stoltz, instead of Michael J. Fox. In reality, Stoltz shot only four weeks of the film, before Fox was granted latitude from his television contract to assume the role that he was the primary choice for.
•S03-E10: The Firefly
Christopher Lloyd, who starred in Back to the Future, appears in this episode; which, like the movie, deals with time travel and how a change in the course of events can lead to a different future.
Roscoe's son travels from 1985 to the future to deliver a message to his father.
Walter taking Peter from the other universe set a course of events that lead to the separation of Roscoe's band Violet Sedan Chair, after they had made only one album. In the parallel universe, the band recorded at least three albums.

8.7
Star Wars: Episode V - The Empire Strikes Back... (1980)
•S02-E03: Fracture
Olivia says to Sam Weiss: "Cut the Yoda crap and tell me what's happening to me?"
•S02-E10: Grey Matters
The license plate on Olivia's SUV at the sanitarium reads "1C3PO1", a reference to C-3PO, the protocol droid from the Star Wars movies.
•S02-E19: The Man From The Other Side
The cars driven by Olivia and Broyles to the bridge on the Charles River have license plate numbers with "R2D2" and "C3P01", a reference to the Star Wars robots.
•S03-E01: Olivia
Henry Higgins mentions "Jedi Mind Trick".
•S03-E15: Subject 13
Properly known as the Strategic Defense Initiative, the Star Wars program never was fleshed-out in this universe, though Secretary Bishop seems to have successfully deployed it in his universe.

0
Vincent: The Life and Death of Vincent Van Gogh...
S02-E04: Momentum Deferred
Vincent Van Gogh's famous final self-portrait is prominently replicated among the many graffiti images in the alley where Olivia defends herself. 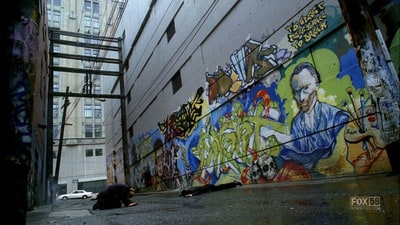 Favorite Characters on TV by Mies

My Favorite Werewolf Movies by captaine

Movies I Watched in 2013 by UnjustLucifer

Tales of the Jazz Age by Nikki

The Biggest TV Disappointment of 2010 by jay-jay

Your home away from home by matalina