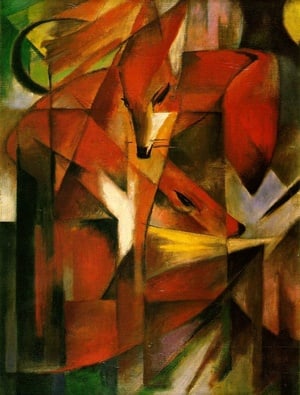 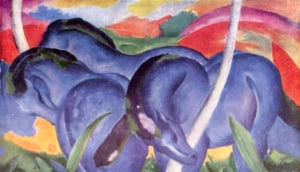 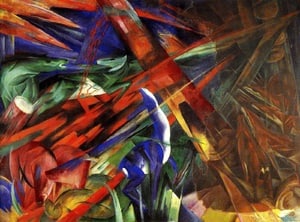 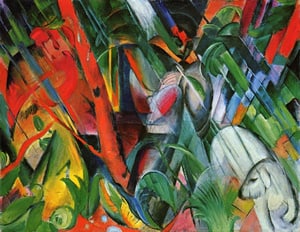 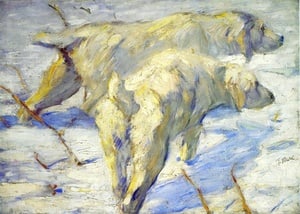 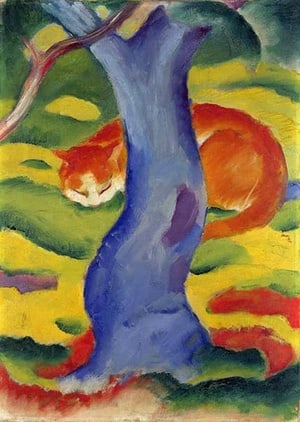 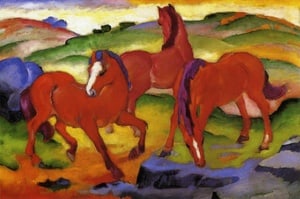 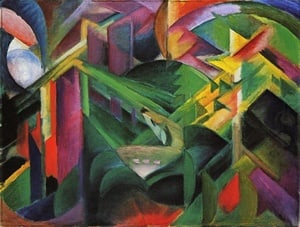 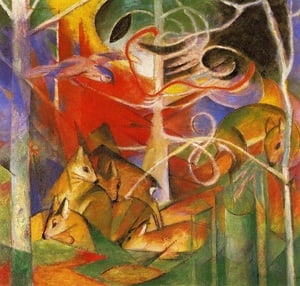 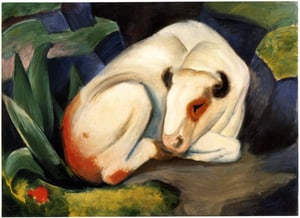 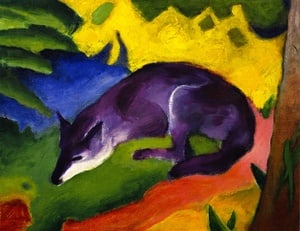 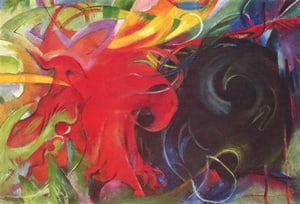 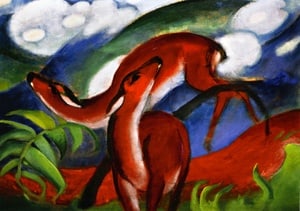 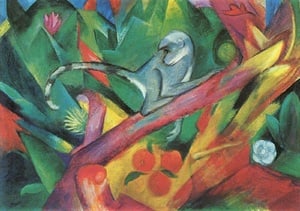 Franz Marc (February 8, 1880 – March 4, 1916) was a German painter and printmaker, one of the key figures of the German Expressionist movement. He was a founding member of Der Blaue Reiter (The Blue Rider), a journal whose name later became synonymous with the circle of artists collaborating in it.

Franz Marc was born in 1880 in Munich, then the capital of the Kingdom of Bavaria. His father, Wilhelm, was a professional landscape painter; his mother, Sophie, was a strict Calvinist. In 1900, Marc began to study at the Academy of Fine Arts, Munich, where his teachers included Gabriel von Hackl and Wilhelm von Diez. In 1903 and 1907, he spent time in France, particularly in Paris, visiting the city's museums and copying many paintings, a traditional way for artists to study and develop technique. In Paris, Marc frequented artistic circles and was able to meet artists, including the actress Sarah Bernhardt. He discovered a strong affinity for the work of Vincent van Gogh.

During his twenties, Marc was involved in a number of stormy relationships, including a years-long affair with Annette Von Eckardt, a married antique dealer nine years his senior. He married twice, first to Marie Schnuer, then to Maria Franck.

In 1906, Marc traveled with his elder brother Paul, a Byzantine expert, to Thessaloniki, Mount Athos, and various other Greek locations. A few years later, in 1910, Marc developed an important friendship with the artist August Macke.

In 1911, Marc founded the Der Blaue Reiter journal, which became the center of an artist circle, along with Macke, Wassily Kandinsky, and others who had decided to split off from the Neue Künstlervereinigung (New Artist's Association) movement.

Marc showed several of his works in the first Der Blaue Reiter exhibition at the Thannhauser Galleries in Munich between December 1911 and January 1912. As it was the apex of the German expressionist movement, the exhibit also showed in Berlin, Cologne, Hagen, and Frankfurt. In 1912, Marc met Robert Delaunay, whose use of color and futurist method was a major influence on Marc's work; fascinated by futurism and cubism, Marc created art increasingly stark and abstract in nature.

With the outbreak of the Great War in 1914, Marc enlisted in the German Army as a cavalryman. By February 1916, as shown in a letter to his wife, he had gravitated to military camouflage. His technique was to paint canvas covers (for hiding artillery from aerial observation) in broadly pointillist style. He took pleasure in creating a series of nine such tarpaulin covers in styles varying "from Manet to Kandinsky", suspecting that the latter could be the most effective against aircraft flying at 2000 meters or higher.

After mobilization of the German Army, the government identified notable artists to be withdrawn from combat for their own safety. Marc was on the list but was struck in the head and killed instantly by a shell splinter during the Battle of Verdun in 1916 before orders for reassignment could reach him.

Marc made some sixty prints in woodcut and lithography. Most of his mature work portrays animals, usually in natural settings. His work is characterized by bright primary color, an almost cubist portrayal of animals, stark simplicity and a profound sense of emotion. Even in his own time, his work attracted notice in influential circles. Marc gave an emotional meaning or purpose to the colors he used in his work: blue was used to portray masculinity and spirituality, yellow represented feminine joy, and red encased the sound of violence. After the National Socialists took power, they suppressed modern art; in 1936 and 1937, the Nazis condemned the late Marc as an entarteter Künstler (degenerate artist) and ordered approximately 130 of his works removed from exhibition in German museums. His painting “Landscape With Horses” was discovered in 2011 along with over a thousand other paintings, in the Munich apartment of Cornelius Gurlitt whose dealer father, Hildebrand Gurlitt, was a collector of Modernist art the Nazis called “degenerate.”

One of Marc's best-known paintings is Tierschicksale (Animal Destinies or Fate of the Animals), which hangs in the Kunstmuseum Basel. Marc had completed the work in 1913, when "the tension of impending cataclysm had pervaded society", as one art historian noted. On the rear of the canvas, Marc wrote, "Und Alles Sein ist flammend Leid" ("And all being is flaming agony"). Serving in World War I, Marc wrote to his wife of the painting, "[it] is like a premonition of this war—horrible and shattering. I can hardly conceive that I painted it."
(Wikipedia)

Films with Scenes in Deserts by Kandi

Homeless Characters in Movies by Kandi

Children Nominated for An Oscar by Kandi

Jean Simmons - Movies I Have Watched by Kandi

The most beautiful classic greek actresses by celina

Magical Enigmas: The Paintings of Remedios Varo by Kenji