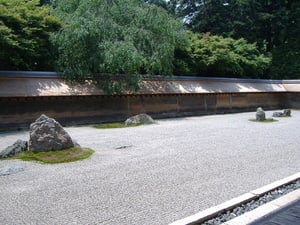 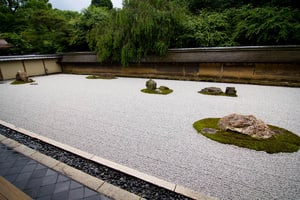 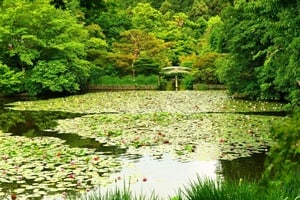 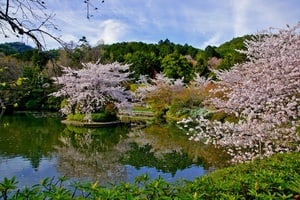 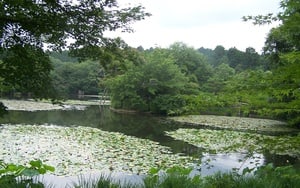 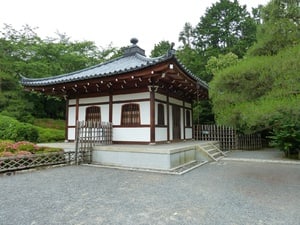 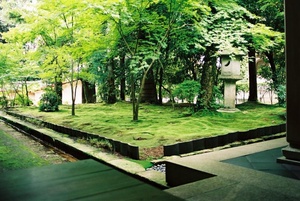 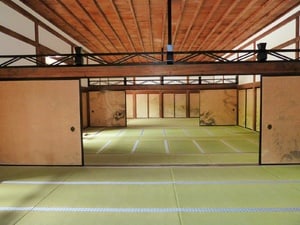 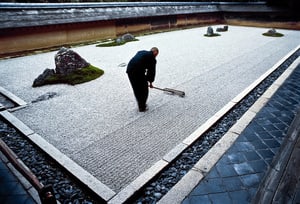 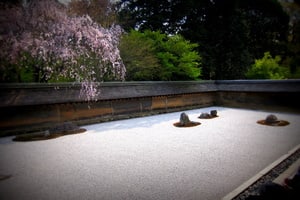 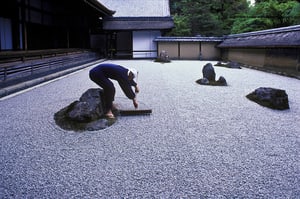 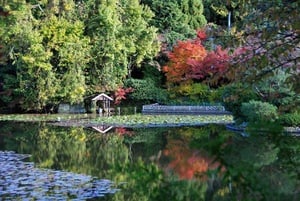 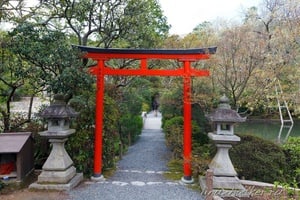 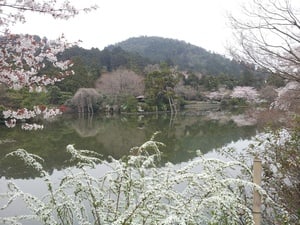 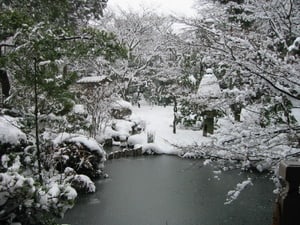 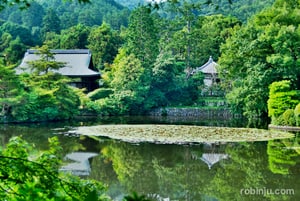 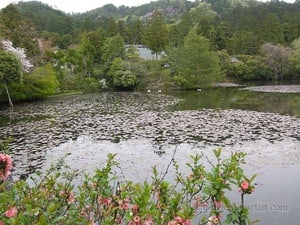 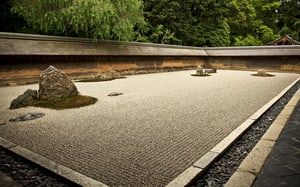 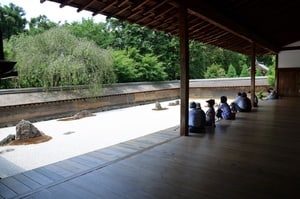 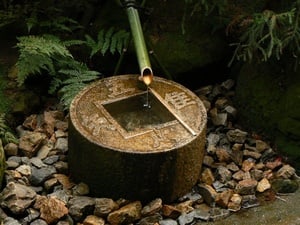 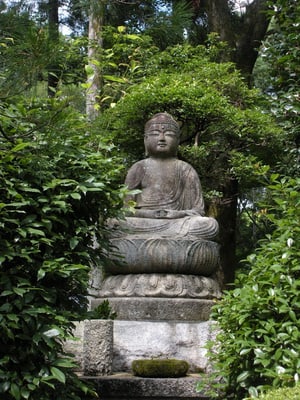 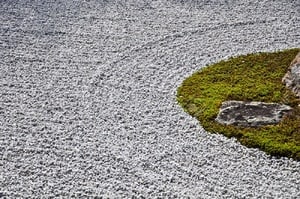 Ryōan-ji (Shinjitai: 竜安寺, Kyūjitai: 龍安寺?, The Temple of the Dragon at Peace) is a Zen temple located in northwest Kyoto, Japan. It belongs to the Myōshin-ji school of the Rinzai branch of Zen Buddhism. The Ryōan-ji garden is considered one of the (if not the) finest surviving examples of kare-sansui ("dry landscape"), a refined type of Japanese Zen temple garden design generally featuring distinctive larger rock formations arranged amidst a sweep of smooth pebbles (small, carefully selected polished river rocks) raked into linear patterns that facilitate meditation. The temple and its gardens are listed as one of the Historic Monuments of Ancient Kyoto, and as a UNESCO World Heritage Site.

The site of the temple was an estate of the Fujiwara family in the 11th century. The first temple, the Daiju-in, and the still existing large pond were built in that century by Fujiwara Saneyoshi. In 1450, Hosokawa Katsumoto, another powerful warlord, acquired the land where the temple stood. He built his residence there, and founded a Zen temple, Ryōan-ji. During the Ōnin War between the clans, the temple was destroyed. Hosokawa Katsumoto died in 1473. In 1488, his son, Hosokawa Matsumoto, rebuilt the temple.

The temple served as a mausoleum for the late Hosokawa emperors. Their tombs are grouped together in what are today known as the "Seven Imperial Tombs" at Ryōan-ji. The burial places of these emperors -- Uda, Kazan, Ichijō, Go-Suzaku, Go-Reizei, Go-Sanjō, and Horikawa—would have been comparatively humble in the period after their deaths. These tombs reached their present state as a result of the 19th century restoration of imperial sepulchers (misasagi) which were ordered by Emperor Meiji.

The conclusive history, based on documentary sources though is as follows: Hosokawa Katsumoto (1430-1473), deputy to the shogun, founded in 1450 the Ryoan-ji temple, but the complex was burnt down during the Onin War. His son Masamoto rebuilt the temple at the very end of the same century. It is not clear whether any garden was constructed at that time facing the main hall. First descriptions of a garden, clearly describing one in front of the main hall, date from 1680-1682. It is described as a composition of nine big stones laid out to represent Tiger Cubs Crossing the Water. As the garden has fifteen stones at present, it was clearly different from the garden that we see today. A great fire destroyed the buildings in 1779, and rubble of the burnt buildings was dumped in the garden. Garden writer and specialist Akisato Rito (died c. 1830) redid the garden completely on top of the rubble at the end of the eighteenth century and published a picture of his garden in his Celebrated Gardens and Sights of Kyoto (Miyako rinsen meisho zue) of 1799, showing the garden as it looks today. One big stone at the back was buried partly; it has two first names carved in it, probably names of untouchable stone workers, so called kawaramono. There is no evidence of Zen monks having worked on the garden, apart from the raking of the sand.

The temple's name is synonymous with the temple's famous 'Zen garden', the karesansui (dry landscape) rock garden, thought to have been built in the late 15th century.

The garden is a rectangle of 248 square meters. Young and Young put the size at twenty-five meters by ten meters. Placed within it are fifteen stones of different sizes, carefully composed in five groups; one group of five stones, two groups of three, and two groups of two stones. The stones are surrounded by white gravel, which is carefully raked each day by the monks. The only vegetation in the garden is some moss around the stones.

The garden is meant to be viewed from a seated position on the veranda of the hōjō, the residence of the abbott of the monastery.

The stones are placed so that the entire composition cannot be seen at once from the veranda. They are also arranged so that when looking at the garden from any angle (other than from above) only fourteen of the boulders are visible at one time. It is traditionally said that only through attaining enlightenment would one be able to view the fifteenth boulder.

The wall behind the garden is an important element of the garden. It is made of clay, which has been stained by age with subtle brown and orange tones. In 1977, the tile roof of the wall was restored with tree bark to its original appearance.

When the garden was rebuilt in 1799, it came up higher than before and a view over the wall to the mountain scenery behind came about. At present this view is blocked by trees.

THE MEANING OF THE GARDEN

Like any work of art, also the artistic garden of Ryōan-ji is open to interpretation, or scientific research into possible meanings. Many different theories have been put forward inside and outside Japan about what the garden is supposed to represent, from islands in a stream to swimming baby tigers to the peaks of mountains rising above the clouds to theories about secrets of geometry or of the rules of equilibrium of odd numbers. Garden historian Gunter Nitschke wrote: "The garden at Ryōan-ji does not symbolize anything, or more precisely, to avoid any misunderstanding, the garden of Ryōan-ji does not symbolize, nor does it have the value of reproducing a natural beauty that one can find in the real or mythical world. I consider it to be an abstract composition of "natural" objects in space, a composition whose function is to incite meditation.".

SCIENTIFIC ANALYSIS OF THE GARDEN

In an article published by the science journal Nature, Gert van Tonder and Michael Lyons analyze the rock garden by generating a model of shape analysis (medial axis) in early visual processing.

Using this model, they show that the empty space of the garden is implicitly structured, and is aligned with the temple's architecture. According to the researchers, one critical axis of symmetry passes close to the centre of the main hall, which is the traditionally preferred viewing point. In essence, viewing the placement of the stones from a sightline along this point brings a shape from nature (a dichotomously branched tree with a mean branch length decreasing monotonically from the trunk to the tertiary level) in relief.

The researchers propose that the implicit structure of the garden is designed to appeal to the viewer's unconscious visual sensitivity to axial-symmetry skeletons of stimulus shapes. In support of their findings, they found that imposing a random perturbation of the locations of individual rock features destroyed the special characteristics.

Centuries after its creation, the influences of the dry elements at Ryōan-ji continue to be reflected and re-examined in garden design — for example, in the Japangarten at the Art Museum at Wolfsburg in Germany.

OTHER GARDENS OF RYOAN-JI

While the rock garden is the best-known garden of Ryōan-ji, the temple also has a water garden; the Kyoyochi Pond, built in the 12th century as part of the Fujiwara estate. Cherry trees have recently been planted northwest of the pond.

Ryōan-ji also has a teahouse and tea garden, dating to the 17th century. Near the teahouse is a famous stone water basin, with water continually flowing for ritual purification. This is the Ryōan-ji tsukubai (蹲踞?), which translates literally as "crouch;" because of the low height of the basin, the user must bend over to use it, in a sign of reverence and humility. The kanji written on the surface of the stone basin, 五, 隹, 止, 矢, are without significance when read alone. Though the water basin's frame is circular, the opening in the circular face is itself a square (口). If each of the four kanji is read in combination with 口 (the square-shaped radical is pronounced kuchi, meaning "mouth" or "aperture"), which the square opening is meant to represent, then the characters become 吾, 唯, 足, 知. This is read as "ware, tada taru (wo) shiru", which translates literally as "I only sufficiency know" (吾 = ware = I, 唯 = tada = merely, only, 足 = taru = be sufficient, suffice, be enough, be worth, deserve, 知 = shiru = know)[14] or, more poetically, as "I know only satisfaction". Intended to reinforce Buddhist teachings regarding humility and the abundance within one's soul, the meaning is simple and clear: "one already has all one needs". Meanwhile, the positioning of the tsukubai, lower than the veranda on which one stands to view it, compels one to bow respectfully (while listening to the endless trickle of replenishing water from the bamboo pipe) to fully appreciate its deeper philosophical significance. The tsukubai also embodies a subtle form of Zen teaching using ironic juxtaposition: while the shape mimics an ancient Chinese coin, the sentiment is the opposite of materialism. Thus, over many centuries, the tsukubai has also served as a humorous visual koan for countless monks residing at the temple, gently reminding them daily of their vow of poverty. Notwithstanding the exquisite kare sansui rock garden on the opposite side of the building, the less-photographed Ryōan-ji tea garden is one of the most sublime and valued cultural treasures the temple offers to the world.
(Wikipedia)

Greatest classical composers and their works by cudion

The Best of Picasso by Kenji

Paintings of Trees by Kenji