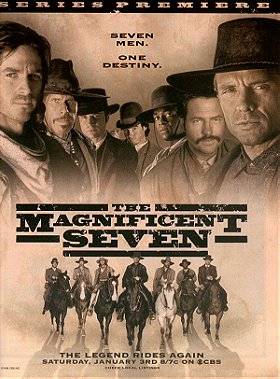 View all The Magnificent Seven lists

" (1998–2000)- IMDb user rating: 7.6- Votes: 1,441- Starring: Michael Biehn, Eric Close, Dale Midkiff, Ron PerlmanThe series followed the story of seven men, each with a different skill, who were recruited to take on Confederate raiders threatening a Native American village. The men ended up settling down in a small town, offering their skills to those who need them. The TV series was made in the footsteps of the 1960 film, touted by Will Joyner in the New York Times to be one of the last gre"

omnivorousrex rated this 5/10 1 month ago

The Eggman added this to have watched list 4 years, 8 months ago