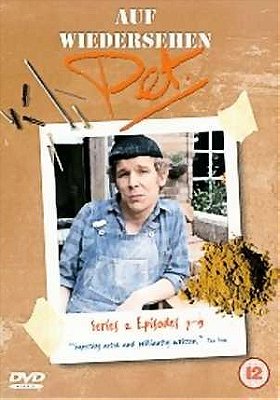 GemLil
A bunch of lads are driven to seek work in Dusselfdorf, Germany; due to mass unemploment in the UK. Auf Wiedersehen Pet is grimey and social realist in places; it has a strong left political message...but dont think it's serious.

The majority of the series, following the group of misfit brickies and carpenters from Germany to Spain and eventually Cuba, has a lads day out/ brits on... read more
View all Auf Wiedersehen, Pet reviews

Ruminator added this to a list 5 days, 17 hours ago

"Remember when British sitcoms used to be about normal working class folk? I watched repeats of the original series in the early nineties and it was strange even then to see blokes like my dad and his mates on a TV show. "

flyflyfly added this to have watched list 1 year, 9 months ago

Holy Godiva added this to have watched list 5 years, 11 months ago

rickterenzi voted for 32 images [View All] 6 years, 1 month ago

rickterenzi voted for 40 images [View All] 6 years, 1 month ago

rickterenzi voted for 40 images [View All] 6 years, 1 month ago

Onion Jack added this to have watched list 6 years, 3 months ago