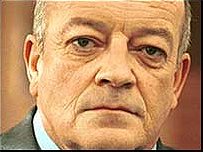 He has two sons, Matthew Healy and Louis Healy, from his marriage to Denise Welch. They divorced in 2012. In February 2015, Healy announced that he is to marry his partner, Joan Anderton.