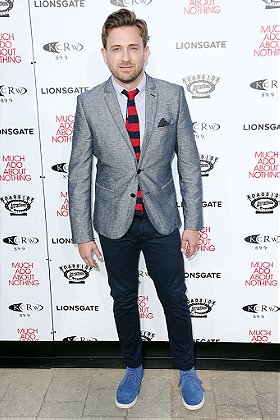 12 votes
Guests in How I Met Your Mother (128 items)
list by Agent Kermit D. Fonz
Published 9 years, 7 months ago

Tom graduated with a Bachelor of Arts from UCLA. Since graduating, Tom has had a wide variety of acting jobs, be they in film, on television, or on stage. Most notably, Tom toured with the European Cast of Grease playing the role of Doody. Acting and singing are not Tom's only talents, he is also a playwright, having written three plays to date. Playing geekster Andrew on Buffy, cazavampiros (1997) with cohorts in crime Warren (Adam Busch) and Jonathan (Danny Strong) is where Tom is at now, and there's no telling what this talented actor might be up to in the future.

He is the son of Fred Lenk, a computer programmer, and Pam Lenk, a teacher in the Pleasant Valley School District.

Named #9 of the Top Ten Sexiest Men of the Buffy / Angel universe in a fan poll by the Buffy the Vampire Slayer fanzine (2004).

Appeared in Buffy, cazavampiros (1997) {Real Me (#5.2)} as one of Harmony Kendall's vampire minions. He later had a recurring role as Andrew Wells in the show's sixth and seventh seasons, and Andrew later appeared in two episodes of Ángel (1999)'s final season (which, ironically, was the only season in which Harmony actress Mercedes McNab was credited as a series regular).

Was the drum major his senior year at Adolfo Camarillo High School, in Camarillo CA.

Appeared in the original Los Angeles run of the stage musical Rock Of Ages.

There's no such thing as a part-time Buffy fan; people watch it compulsively. [at a BtVS convention in Northern Ireland, 30 Sept. 2002]