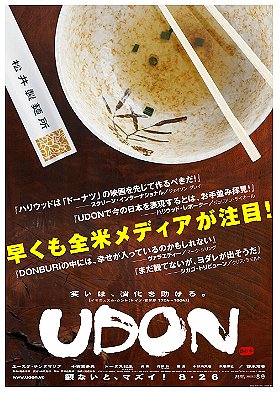 6 votes
101 Foodie Movies You Must See Before You Die (101 items)
list by moviebuff
Published 6 years, 1 month ago

"Kosuke (Yusuke Santamaria), the son of an udon shop owner, is from a tiny rural town in Kagawa prefecture known for its udon noodles. Kosuke, however, is sick of his hometown, and even more sick of udon. He decides to try his luck in New York, only to return six years later in debt-ridden disappointment. Back at home, he meets flighty food column editor Kyoko (Konishi Manami, Orange Days), and the two happen upon a bowl of delicious udon noodles that will change their lives."

"An udon enthusiast and Kagawa native himself, Motohiro did extensive field research to find the best shops and recipes to showcase on screen and help spread the love for the noodle. The filmmakers even took their mission abroad by opening an udon stand at the 2006 Cannes film market. An earnest yet tongue-in-cheek celebration of life and food, Udon is a mouth-watering joy to watch. After all, home is where the udon is." -- YesAsia

Ireum added this to have watched list 4 years, 9 months ago

moviebuff added this to a list 6 years, 1 month ago
101 Foodie Movies You Must See Before You Die (101 movies items)