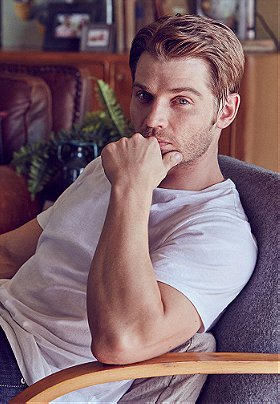 In 2005, after Grounded for Life was canceled, Vogel appeared in four film roles. First, he played Eric Richman, the romantic interest of Blake Lively's character in The Sisterhood of the Traveling Pants, which had a June release. His next role was the lead in the low-budget film, Supercross, which was theatrically released in August. Vogel filmed his role in Havoc, a dark, R-rated drama also starring Anne Hathaway, in 2003, but the film was not released until November 2005, when it bypassed theaters and was released directly-to-video. Vogel's final 2005 role was in Rumor Has It…, starring Jennifer Aniston, in which he had a supporting role as the son of Kevin Costner's character.

Vogel's first 2006 role is in Poseidon, a disaster film and remake of the 1972 film The Poseidon Adventure; he plays the fiancé of Emmy Rossum's character. The film, which has a budget of $160m, opened on May 12. Vogel was originally offered the role of Angel in X-Men: The Last Stand, but backed out to appear in Poseidon.[3] The same year, he appeared in Caffeine, a romantic comedy and signed to appear in a horror movie called Open Graves, shot in Spain. In 2007, Vogel appeared in the film The Deaths Of Ian Stone, part of the horror film festival 8 Films to Die For. In 2009, Vogel starred in the neo-noir film Across The Hall and the horror film Open Graves. He was part of the 2010 romantic comedy film She's Out of My League, Blue Valentine, TV series Miami Medical and Heaven's Rain.

Mike was part of the 2011 comedy film What's Your Number? and plays "Johnny Foote" in the film adaption The Help. He most recently played Dean on the short-lived ABC drama Pan Am (based on the defunct airline of the same name).

Magdalena added this to a list 2 years, 10 months ago
Actors (older) (815 person items)

matt added this to a list 3 years, 4 months ago
Most beautiful men on earth 3 (200 person items)

matt voted for 12 images [View All] 6 years ago

matt voted for an image 6 years ago

MovieCriticGamer added this to a list 6 years, 3 months ago
Unfriended (Made 10 Years Earlier) (19 person items)