A (sadly) short list of intelligent horror movie heroes who generally made good decisions and did the best they could to survive.
Sort by: Showing 12 items
Rating: List Type: 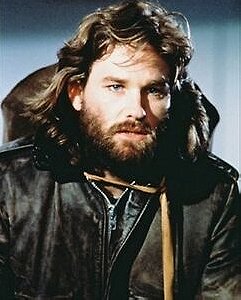 Pulls a fire alarm to alert the others before he investigates the commotion in the kennel. Orders Childs to burn the Thing. Quickly accepts the reality of the situation. Burns "Bennings" before he can escape. Creates a simple, effective plan to subdue Blair. Calms the others down and takes charge. Manages to navigate his way back to the station after having his tow line cut. Keeps himself alive by breaking into the station and threatening the others with an explosive. Burns the Thing as soon as Norris transforms, then forces the others to wait and let it burn. Uses a brief encounter with the Thing to create a theory that later proves to be correct. Speculates and creates a new theory in the climax, which is also revealed to be correct. Designs a plan to destroy the Thing and is possibly successful. Accepts his fate. 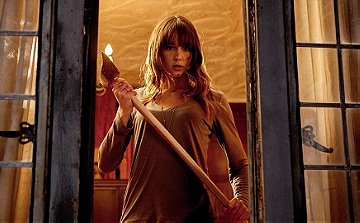 Secures the house. Texts 911. Wounds Tiger Mask while evading his attacks. Later kills Tiger Mask with a meat tenderizer. Fends off Lamb Mask with a screwdriver. Sets up traps. Takes an opportunity to escape and kills Lamb Mask when he pursues her. Ambushes Fox Mask in the basement and kills him. Defends herself and kills the final three antagonists.

Attempts to call 911 and escape out the window. Sneaks into the basement without being noticed. Gets information from Michael. Convinces Victoria to act as a distraction so he can sneak back upstairs. Prioritizes getting to the gun in the safe. Tries to escape again after discovering the truth about the "Collector." Frees Victoria and would have saved her had she listened to his instructions. Uses an alarm clock as a distraction to save Jill. Manages to escape the house and only returns because he sees that Hannah is still alive. Creates a trap to kill the Collector that almost works. Kills the Collector's dog with a flaming bucket. Traps the Collector in one of his own traps. Successfully escapes the house with Hannah. 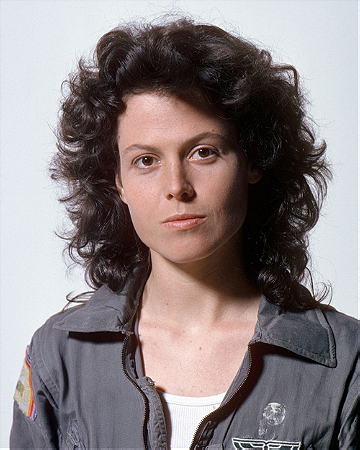 Determines that the "distress signal" is a warning. Attempts to enforce standard quarantine protocol that would have saved the crew. Gives a logical reason for supporting Dallas' plan over Lambert's. Discovers Ash's secret orders and later gains information from him. Carries out the three-man plan on her own after the others are attacked. Retreats when confronted by the alien. Manages to escape in the shuttle before the ship explodes. Utilizes explosive decompression, a grappling hook, and the shuttle's engines to blast the alien into space. 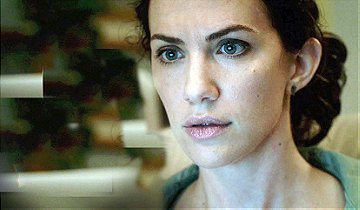 Immediately locks all the doors once she realizes she's being stalked. Uses lipstick on the front door and a flashlight to write a message to the killer. Successfully sneaks outside and back into the house to turn on her car alarm. Uses the alarm as a distraction while she attempts to get Sarah's phone. Smashes the killer's hand with a hammer. Throws the flashlight off the roof to create another distraction so she can escape. Makes it back onto the roof with an injured leg after she fails. Knocks the killer off the roof and steals his crossbow. Realizes that she can't escape with her injured leg and will bleed out if she attempts to hide and wait. Shoots the killer in the shoulder with his crossbow. Writes a description of the killer on her laptop along with her last words to her family. Utilizes insecticide spray and a smoke alarm to blind and deafen the killer. Finally kills him with a corkscrew. Finds her phone and calls 911. 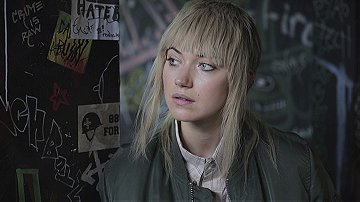 Asks Pat to call 911. Helps subdue Big Justin. Spots the men on the other side of the door through a vent and attempts to warn Pat. Disembowels Big Justin to make sure he's dead. Uses a microphone stand against one of the dogs. Explains the situation to Daniel and gains his alliance. Encourages Pat to continue fighting and assists him in coming up with a plan. Sneaks up on a skinhead and quietly kills him. Uses inventive tactics to distract a skinhead and make him waste his remaining bullets, then sneaks up and shoots him while he fights Pat. Lets Gabe go for help. Quickly and efficiently executes Darcy and his henchmen. 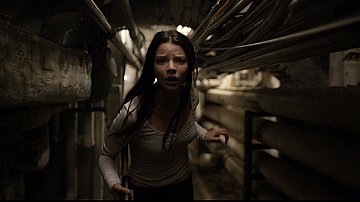 Immediately notices the struggle behind the car and tries to quietly escape once Dennis is inside. Helps Marcia by telling her to pee on herself when Dennis takes her. Knows the girls don't stand a chance against Dennis in a fight due to his strength and convinces them not to attack him. Complies with Dennis' orders to avoid upsetting him. Tries to befriend Hedwig and get him to help them escape as soon as she meets him. Deducts from Hedwig's statement about "making the place safe" that the room had a weak point. Helps barricade the door while Claire attempts to escape through the vents. Tries to dissuade Marcia from attacking Patricia and fleeing, which ultimately fails. Befriends Hedwig to gain access to his room and the window inside it. Persuades Hedwig to let her stay in his room and keeps up the act of friendship. Uses the walkie-talkie to radio for help while fighting off Hedwig. Takes the opportunity to grab a nail on the floor while the door is open and later uses it to break out. Tries to access the internet on the computer. Figures out where the keys are by watching the alters' video diaries. Locks the Beast in the supply closet. Follows the instructions on the note from Dr. Fletcher and successfully calls Kevin back into the light, gaining information from him that saves her life. Rushes to get the shotgun as soon as Hedwig reemerges. Moves into the cage to get better cover. Shoots the Beast twice. 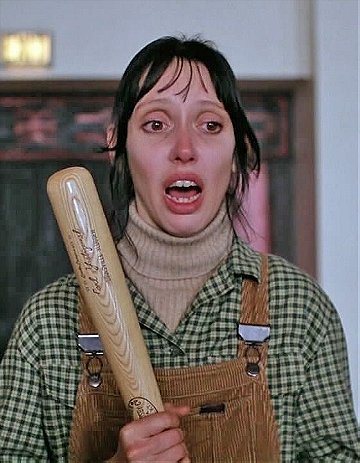 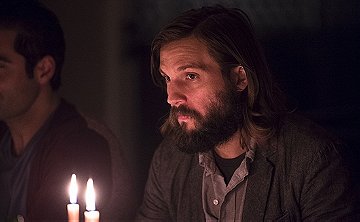 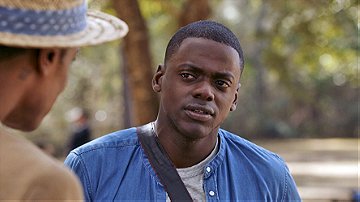 Chris Washington (Get Out)

Suspects that Rose neglecting to inform her parents of his race might cause issues later. Rejects the offer to be hypnotized. Notices the odd behavior of Walter and Georgina. Briefly catches onto the fact that Missy is hypnotizing him. Doesn't dismiss the late night hypnotism as "just a dream" the next morning. Detects that there's something off about Logan, realizes that he's seen him somewhere before, and tries to subtly take a picture of him. Recognizes that Georgina purposefully unplugged his phone. Understands that Logan's reaction was not a seizure. Keeps in contact with Rod until his battery runs out. Tries to leave early with Rose. Tries to just leave as soon as possible after discovering the box of photos instead of confronting Rose about them. Quickly accepts Rose's betrayal and tries to fight back against Jeremy. Adapts to the horrific reality of his situation and simply focuses on survival. Uses the chair's stuffing as ear plugs to block the hypnotism, then pretends to pass out. Knocks Jeremy unconscious once his back is turned. Spears Dean with a deer head's antlers. Breaks the tea cup before Missy can reach it, lets her stab his hand to gain an advantage, then kills her with the same knife. Realizes that Jeremy will continue kicking the door closed and creates a quick and efficient strategy to get out of his choke-hold. Stomps on Jeremy's head multiple times to make sure he's dead. Tries to escape in Jeremy's car and call 911. Takes a flash picture of Walter to break the man trapped inside out of his trance, which ultimately saves Chris' life. 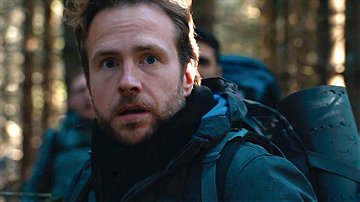 Stays hidden in the convenience shop, which likely saved his life. Doesn't want to take the shortcut through the woods. Immediately finds the others and calms them down after their nightmares. Continues to suggest that the group should turn around and leave the forest. Tries to discourage Dom from leading them down a strange path. Climbs a ridge to scope out the area. Attempts to save Hutch but agrees to head back rather than get lost in the dark. Retrieves Hutch's supplies from his body and refuses to waste time burying him. Climbs a hill to scout out the path ahead. Hides when the creature returns and convinces Dom to run. Follows the fires he spotted to find shelter. Breaks the thumb on his non-dominant hand to get out of his restraints. Tries to ask for information about the creature. Burns the creature's worshipers alive and uses the distraction to escape. Shows no hesitation to harm the worshipers that would prevent him from leaving. Arms himself with an ax and rifle before escaping the cabin. Tries to shoot the creature. Strikes the creature, stunning it, and runs for the edge of the forest.

Child Stars all Grown up by sasha25

Chris Columbus: The best and worst of by Agent Kermit D. Fonz