In Praise of Duncan Edwards 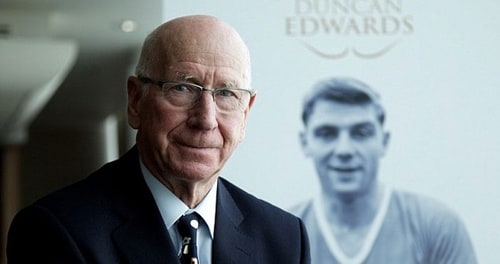 "Physically, he was enormous. He was strong and had a fantastic football brain. His ability was complete – right foot, left foot, long passing, short passing. He did everything instinctively."

“He was more than a great player – sometimes he seemed like some bright light in the sky. He was a giant, and even today his loss is the hardest thing to bear.”

“Duncan Edwards is the one person who, even today, I really felt inferior to. I’ve never know anybody so gifted and strong and powerful with the presence that he had.”

“He was incomparable, I feel terrible trying to explain to people just how good he was. His death was the biggest single tragedy ever to happen to Manchester United and English football. I always felt I could compare well with any player – except Duncan. He was such a talent, I always felt inferior to him. He didn’t have a fault with his game.”

“He was the best player I ever saw, or am likely to see in my life. If I was asked to name a team of the players I played with, his name would be the first one I would put in, no question about it.”

“I never thought I could be as good as him. Never. He had every talent, he was the best short passer, he was the best long passer. He had terrific vision. His 60-70 yard passes with a heavy ball were pinpoint accurate. He had an enthusiasm for the game, he never stopped talking about it. He’d pick you up if you were losing. He was absolutely sensational, fantastic. He was a great loss to England, and he would probably have played in the 1966 World Cup final because he was young enough. Probably also the United team that won the European Cup in 1968.”

“Duncan could do anything. If the goalkeeper kicked the ball downfield, he would be heading it, if there was a corner kick he would be knocking the ball in, and if someone was running through he would be the one to dispossess him. So many times he made the rest of us feel like pygmies.”

“If you look at most players they’re good at certain things; in the air, with their left or right foot, they read the game well, or have pace. But Duncan had it all – he really was better at everything than anyone else. From the first moment I saw him he could play anywhere and do anything; he was brave, great in the tackle, could pass it long or short and score goals. When I arrived at United I was told there were a lot of good players, but Duncan was the only one who could do things I knew I wasn’t capable of.”

“The last time I played with Duncan was in Belgrade, when we qualified for the semi-finals of the European Cup the day before the crash. I was convinced we were going to win the trophy against Real Madrid at the second time of asking, and I believed that, with him, England would march on to win the World Cup later that year in Sweden. Pele stole everyone’s attention in that tournament, but if Edwards had been there I swear he would have had a challenger.” about United’s European Cup campaign in the 1957-58 season

"I find that I think about Duncan a lot. I have seen all the players who in their time have been labelled the best in the world -- Puskas, Di Stefano, Gento, Didi. John Charles and all the rest -- and not one of them have been as good as Big Duncan. There was no other player in the world like him then, and there has been nobody to equal him since. The man was incomparable.

Sometimes I fear that there is a danger that people will think that we who knew him, and saw him in action, boost him because he is dead. Sentiment can throw a man's judgement out of perspective. Yet it is not the case with him. Whatever the praise one likes to heap on Duncan is no more than he deserved. He was out on his own at left-half and a First Division player in every other position. There was no one else to start with him.

I am not a person to dramatize things or dispense fulsome praise. It is not in my make-up. A man is a good player or he is not. A few are great, and they deserve respect. But Duncan Edwards was the greatest. I see him in my mind's eye and I wonder that anyone should have so much talent. He was simply the greatest of them all."

“We played matches where he won them on his own. I remember, particularly, two matches against Chelsea in the semi-finals of the Youth Cup. We beat them 2-1 at Chelsea, 2-1 up here at Old Trafford, and he scored all four. And I tell you, they were hard games because Chelsea did have some good players. I remember taking a corner kick and thinking: ‘I’ll just hang it up’ because I knew he’d get there. Sure enough, he scored the winning goal by blasting through about 10 people – bang. He was massive. If Duncan was playing against today’s massed defences, he would simply knock them down.”

“I wasn’t fit to tie his shoe laces.” 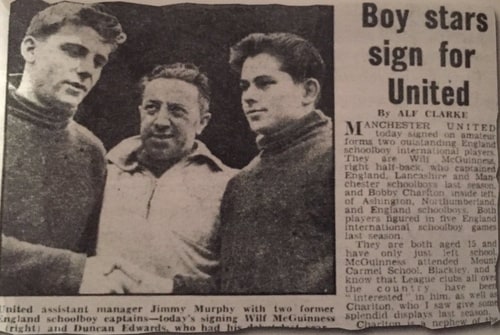 “If I shut my eyes I can see him now. Those pants hitched up, the wild leaps of boyish enthusiasm as he came running out of the tunnel, the tremendous power of his tackle – always fair but fearsome – the immense power on the ball. He played wing-half, centre-half, centre-forward and inside-forward with consummate ease. When I used to hear Muhammad Ali proclaim to the world that he was the greatest, I used to smile. You see, the greatest of them all was an English footballer named Duncan Edwards.” 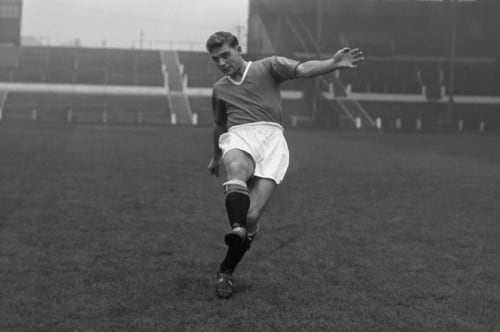 “Despite his massive muscular stature, he could bring off the most delicate of manoeuvres. When he wanted to he was all flicks and swivels, almost like a conjuror.” 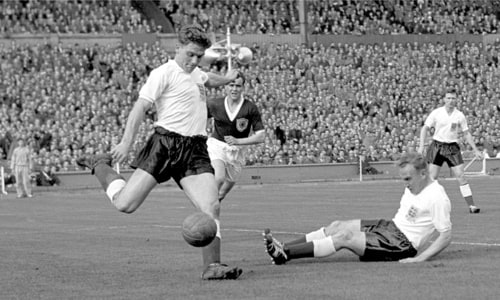 “There is no doubt in my mind that Duncan would have become the greatest player ever. Not just in British football, with United and England, but the best in the world. George Best was something special, as was Pele and Maradona, but in my mind Duncan was much better in terms of all-round ability and skill.”

“You can keep all your Bests, Peles and Maradonas, Duncan Edwards was the greatest of them all.” 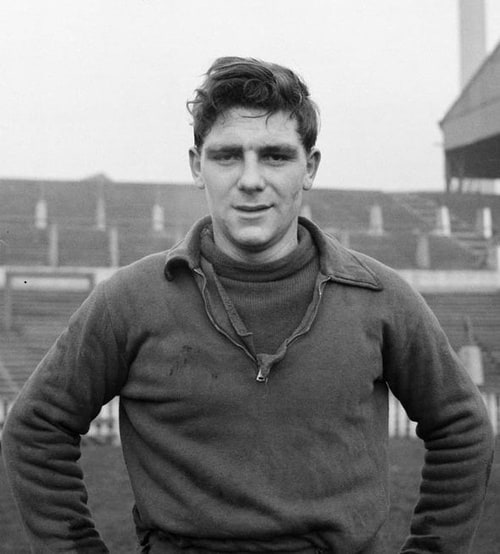 “When United won the League in 1956, they were losing to Blackpool and…they turned to Duncan at halftime and said: ‘Come on Duncan get us going’. So you’ve got John Berry and all these experienced players in the team and they turned to Duncan Edwards as their savior at just 19. That tells you everything about him.” 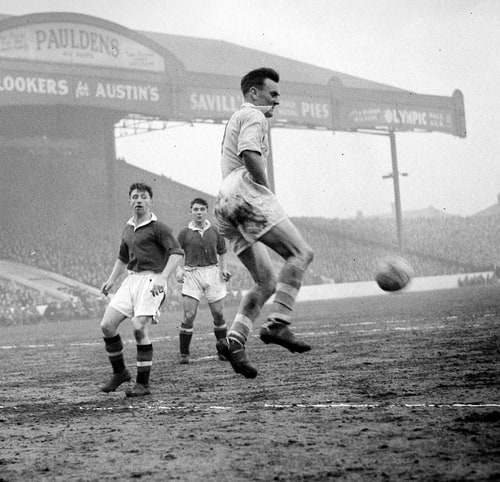 “You don’t hear many professionals talk lightly of greatness because it is so rare, but that is what I saw in Duncan Edwards the first time I set eyes on him. He reached the same fabulous standard at left-half, centre-half, inside-left and centre-forward. He is the kind of player managers dream about.” 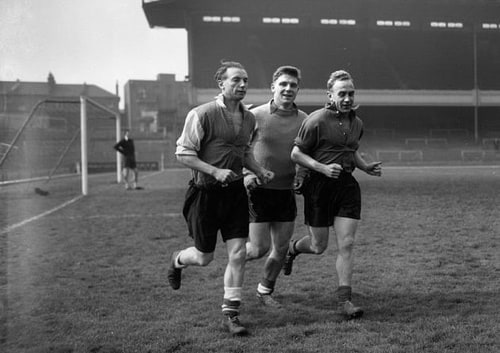 “You can play him anywhere and he would slot into that position as if he’d been playing there season after season. When the going gets rough, Duncan is like a rock in a raging sea.” 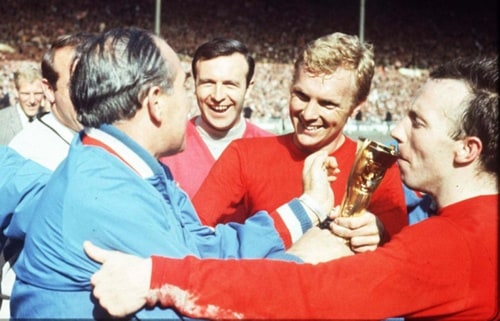 On placing Edwards at 19 on his list of the Greatest British Football players: "Had he survived the Munich Air Disaster, which took his life at the age of 21, Edwards would probably be No 1 on this list – so forgive me, because more than any other player it is impossible to accurately place him in this pantheon of greats. I met Big Duncan when I was first called up by England, shortly before he died in 1958 and he was a true gent. He could have been anything – a great central defender or midfielder, probably a striker too. He would have been at his peak at the 1966 World Cup, he would have won everything the game had to offer." 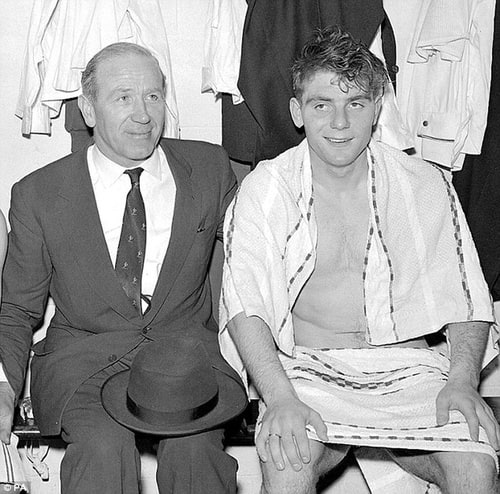 “When he first came to Old Trafford I tried to find fault with Duncan, but I couldn’t find one. He was never really a boy; in football terms, he was always a man.”

“We used to look at players in training to see if we might have to get them to concentrate more on something. We looked at Duncan, and gave up trying to spot flaws in his game.”

“I am convinced that Duncan would have been a fixture in the England team well into the 1970s. Whatever was needed in a player, he had it.”

” (the most) complete footballer in Britain — possibly the world.”

Duncan Edwards (1 October 1936 – 21 February 1958) was an English footballer who played for Manchester United and the England national team. He was one of the Busby Babes, the young United team formed under manager Matt Busby in the mid-1950s, playing 177 matches for the club. One of eight players who died as a result of the Munich air disaster, he survived initially but succumbed to his injuries in hospital two weeks later.

8 votes
In Praise of... (19 lists)
list by shotswerefired
Published 4 years, 1 month ago

smoke 'em if you got 'em: cartoons by coffee-boy

Scenes in the Pool 2 - Movies by Kandi