Me and my fellow member had great Saturday whit these movies.
Sort by: Showing 7 items
Decade: Rating: List Type:

It couldn't start worse? I already saw this film a few weeks ago. So what was the movie about?

It was about this sleazy murderer played by Michael Ironside. He tried to kill this one lady, but constantly failed. So he have to cover up his traces by killing some people in hospital. This is the whole plot so there was not much going on. Also I can't understand why Visiting Hours is a video nasty. After all it wasn't that violent film. It was like a boring version of Joe Spinell's Maniac. Ironside's character had some father issues, but they didn't make any sense. So it was pointless side plot.

Only memorable scene was this one where Ironside wears this ridiculous tank top: 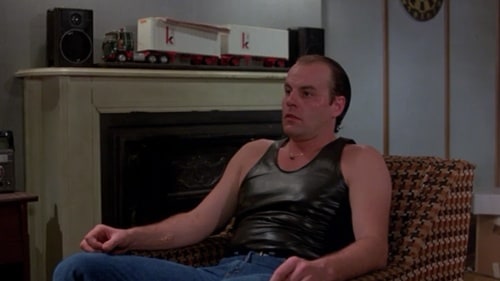 This was actually decent film. Noting speacial, but after Visiting Hours it was nice. The Initiation contains plot were young girl saw her mother cheating her father with another guy. After that the girl tried to kill her parents and there was also a burning man!

Story leaps some years forward and shows how this girl has become a teenager. This girl has some issues. She's seeing nightmares about burning man. There's also a gardener from asylum who kills people with garden tools. Overall this film was tired try to make slasher film. It contains many slasher genre's cliches by hiding the killer's identity and misleading viewers. In the end the plot takes a surprisingly funny twist that none of us saw coming. It was so bad that it almost turned to be good ending.

Yeah we got out the eighties. Though this was no better film. Killer Instinct is a story about maniac who escaped from asylum. For some reason there's group of people who hang him. I really don't understand why they did it and honestly I could not care less.

This film sure was boring as hell. After the prologue it falls even more to boredom. Main plot is very much like every popular slashers from nineties. There's teens that don't look teens and they go to that old asylum. So the story goes like this, in that asylum someone starts to kill them. In side plot some people are talking about that this asylum should be wrecked. These scenes are total waste of time and pointless because nobody does anything and the asylum stays on the ground.

Did I mention that this film also had poor man version of Marlon Wayans. Beside that all it had some reality tv kind of scenes. Yet the film never did explain why that was?

First time I saw this film it was 2010 Night Visions -film festival. I hated it then I hate it now. There is so much wrong in this shit. Sweatshop is that kind of movie that tries to bring some old school splatter back to business but failing to do that badly. It have not much of a plot. The only idea is to show some cruel death scenes. It could work fine, unless all the film makers wouldn't be retarded. First of all, the cinematography is so awful that you cant't even see anything clearly. Second, there is too many color filter that makes it even more crappier looking film.

First time when I saw this film I was very disappointed. I had some hope for it being better film. There is so much potential. I like the idea of old school effect and punk rocker looking dudes and chicks as the main characters. How ever this was still a very horrible film.

This was the most stupidest movie in this marathon. It was about some people who smoked weed and then there was this killer. The Greenskeeper is surely one of the boring horror comedies that there is. It doesn't have anything good. It has also made completely wrong. Every scene looks like crap and none of them is funny or scary. Ending twist was also very slasher but the acting was so bad that I couldn't care less.

Oh yeah, did I mention that this film had many boobs? I guess not. Lets say that almost in every movie in this marathon had more or less boobs and nudity. After all this turned out be a horror/slasher marathon.

And still I was hoping that the next film would be some teen comedy. As you can see my hopes were useless.

Yeah right! He was in three scenes or something. So that was total bullshit. Thank God there was also Angus Scrimm and James Russo. Specially Russo was great. In one scene he was watching some crap from television and smoking pod. But this was still very bad film and satanic. Plot was very confusing and I was so drunk at this point that I don't remember what was going on. Probably I didn't miss anything.

Fellow member Kurkkuharja wanted to watch this film. Unfortunately he went home before this ended. So I call him a liar for rating Misbegotten!

So this was the last film of the marathon and I was drunk. Apparently this was directed by Mark L. "Commando" Lester. Yep. And there was Kevin Dillon and some devil child. In the end there was also some Lester-style action scenes. Ha ha ha... VierasTalo, Tom Henry and Kurkkuharja all missed those. Because they are wussies. What a fun way to end this first Netflix marathon!

Movies I Watched in March 2020 by AVPGuyver21