Similar Weapons:
Chinese Pistol, which also uses 10mm ammo, and of course the standard unsuppressed version of the 10mm Pistol that you start the game with. 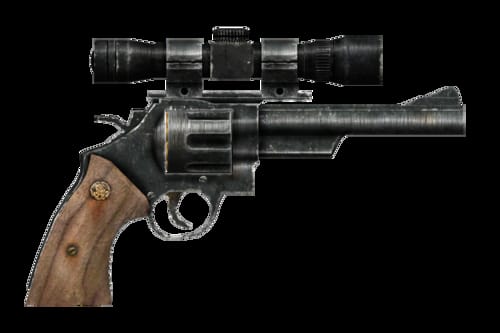 Similar Weapons:
.32 Revolver, much less powerful and doesn't have a scope.

Personal Thoughts:
A custom-built, steam-powered weapon that can pin enemies and body parts to walls! It's a fun gun to shoot but ammo capacity is low. Only available through crafting, so you'll have to find the schematics and all the necessary components if you want to try out one of these rifles.

Personal Thoughts:
NOTHING is gonna survive a direct hit from this monster, just be careful not to blow yourself up in the process. Insanely powerful, but has severely limited practical use.
Ammo is very, very rare and extremely expensive. A big drawback is the force of the explosion tends to scatter any nearby loot all over the place.
Rylvan's rating:

Similar Weapons:
Hunting Rifle, also bolt-action, but fires .32 caliber rounds and has iron sights instead of a scope.

Personal Thoughts:
When facing superior numbers and/or tough enemies, picking them off at a safe distance is a good strategy. And it's just so much fun. Ammo is fairly common and relatively cheap. Maintenance may be an issue, as spare parts are uncommon. Reloading is slow and ammo capacity low.
Not recommended for use in a close range firefight (except maybe against a small number of enemies, then you could use it in VATS like a shotgun, if push comes to shove).

Personal Thoughts:
A gatling gun with lasers. How is that not all kinds of awesome? This bad boy can shoot down an Enclave Vertibird in the hands of an experienced user. Only drawback is it's heavy, so it takes up a large portion of your inventory space and cuts down on how much loot you can scavenge.

Similar Weapons:
Sawed-Off Shotgun, which is inferior in almost every way.

Personal Thoughts:
Trustworthy, dependable, and packs a punch. Ammo is common and inexpensive. Spare parts aren't too hard to come by. Maintenance isn't much of a problem.

Similar Weapons:
Assault Rifle, which is pretty much inferior in every way.

Personal Thoughts:
Versatile, reliable, and has decent firepower. Ammo is plentiful and cheap. Spare parts are fairly easy to find, if you know where to look. Not too difficult to maintain. 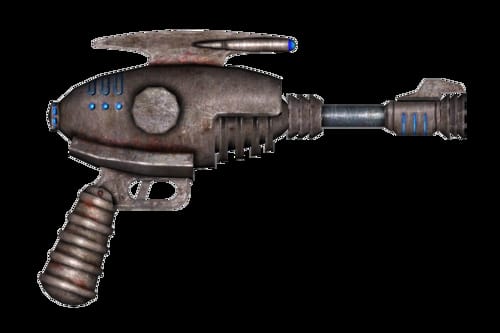 Similar Weapons:
None. This extraterrestrial sidearm has no equal. Two human engineered models of energy pistol do exist (Laser and Plasma), but they're both total weaksauce.

Personal Thoughts:
Ammunition is EXTREMELY LIMITED, but you'll only ever need one shot with this precious baby. Impressive power to weight ratio. Only one of these in the whole game (that is without DLC, cheats, or mods).

Personal Thoughts:
What's better than a rifle that shoots lasers? A rifle that shoots THREE lasers! This is a deadly beast. It uses more ammo per shot but dishes out superior damage allowing you to cut down enemy after enemy with ease. Even more powerful than the best Plasma Rifle, and invaluable against the tougher enemies you will bump into in Broken Steel.

If I could only carry one weapon, this would be it. Bring it on Wasteland.
Broken Steel is the only add-on I've played, so this list won't include weapons introduced in the other DLC as I haven't had the chance to try them out.

Songs Forever in My Head by Lydia

Favourite Paintings with Dogs by Kenji

Top 10 Most Memorable Voices by filmbuilder

My Yearly Film Journals by The Cinephile

Move seen in 2013 by blackspike

Movies Watched in 2013 by Rachel

Watched in July 2018 by Hootsaidtheowl

My Cloak & Dagger Playlist by Rylvan

My Fave Tolkien Characters by Rylvan