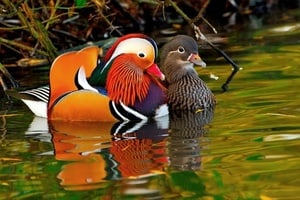 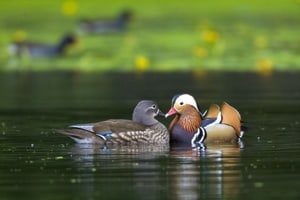 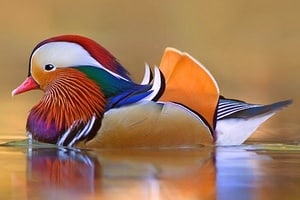 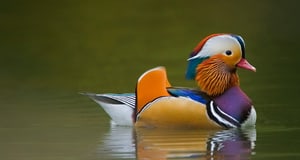 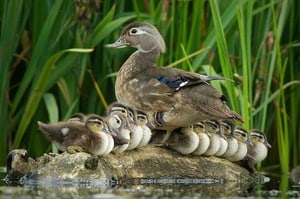 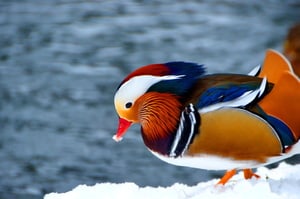 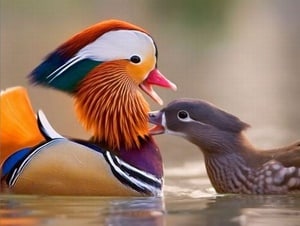 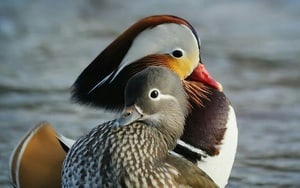 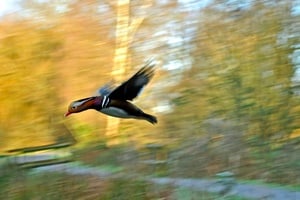 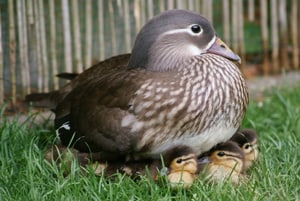 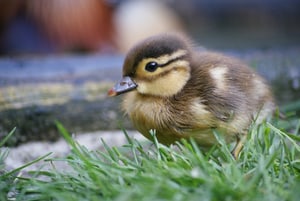 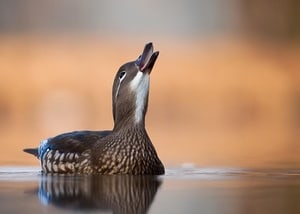 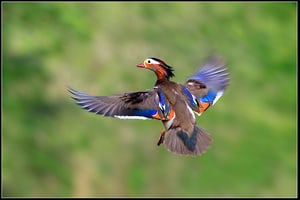 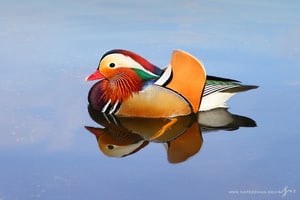 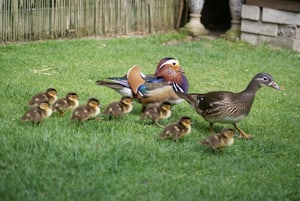 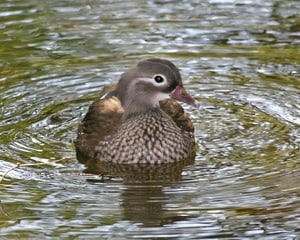 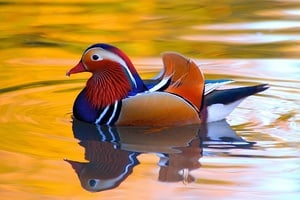 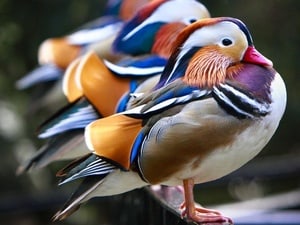 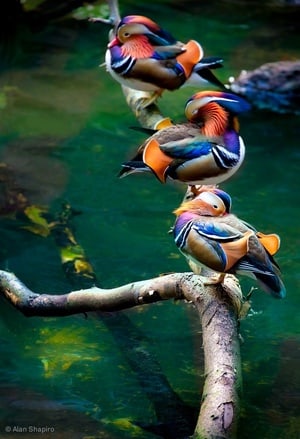 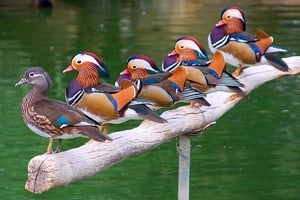 Birds renowned for beauty and symbols of faithful love

The Mandarin duck (Aix galericulata), or just Mandarin, is a perching duck species found in East Asia. It is medium-sized, at 41–49 cm long with a 65–75 cm wingspan. As the other member of the genus Aix, it is closely related to the North American wood duck.

The adult male is a striking and unmistakable bird. It has a red bill, large white crescent above the eye and reddish face and "whiskers". The breast is purple with two vertical white bars, and the flanks ruddy, with two orange "sails" at the back. The female is similar to female wood duck, with a white eye-ring and stripe running back from the eye, but is paler below, has a small white flank stripe, and a pale tip to its bill.

There are various mutations of the Mandarin duck found in captivity. The most common is the white Mandarin duck. Although the origin of this mutation is unknown, it is presumed that the constant pairing of related birds and selective breeding led to recessive gene combinations leading to genetic conditions including albinism.

The species was once widespread in East Asia, but large-scale exports and the destruction of its forest habitat have reduced populations in eastern Russia and in China to below 1,000 pairs in each country; Japan, however, is thought to still hold some 5,000 pairs. The Asian populations are migratory, overwintering in lowland eastern China and southern Japan.

Specimens frequently escape from collections, and in the 20th century a large feral population was established in Great Britain; more recently small numbers have bred in Ireland, concentrated in the parks of Dublin. There are now about 7,000 in Britain, and other populations on the European continent, the largest in the region of Berlin. Isolated populations exist in the United States. The town of Black Mountain, North Carolina has a limited population, and there is a free-flying feral population of several hundred mandarins in Sonoma County, California. This population is the result of several Mandarin ducks escaping from captivity, then going on to reproduce in the wild.

The habitats it prefers in its breeding range are the dense, shrubby forested edges of rivers and lakes. It mostly occurs in low-lying areas, but it may breed in valleys at altitudes of up to 1,500 metres (4,900 ft). In winter, it additionally occurs in marshes, flooded fields, and open rivers. While it prefers freshwater, it may also be seen wintering in coastal lagoons and estuaries. In its introduced European range, it lives in more open habitat than in its native range, around the edges lakes, water meadows, and cultivated areas with woods nearby.

In the wild, Mandarin ducks breed in densely wooded areas near shallow lakes, marshes or ponds. They nest in cavities in trees close to water and during the spring, the females lay their eggs in the tree's cavity after mating. A single clutch of nine to twelve eggs is laid in April or May. Although the male may defend the brooding female and his eggs during incubation, he himself does not incubate the eggs and leaves before they hatch. Shortly after the ducklings hatch, their mother flies to the ground and coaxes the ducklings to leap from the nest. After all of the ducklings are out of the tree, they will follow their mother to a nearby body of water.

Mandarins feed by dabbling or walking on land. They mainly eat plants and seeds, especially beech mast. The species will also add snails, insects and small fish to its diet. The diet of Mandarin ducks changes seasonally; in the fall and winter, they mostly eat acorns and grains. In the spring they mostly eat insects, snails, fish and aquatic plants. In the summer, they eat dew worms, small fish, frogs, mollusks, and small snakes. They feed mainly near dawn or dusk, perching in trees or on the ground during the day.

For Koreans, Mandarin ducks represent peace, fidelity, and plentiful offspring. Similar to the Chinese, they believe that these ducks mate for life. For these reasons, pairs of Mandarin ducks called wedding ducks are often given as wedding gifts and play a significant role in Korean marriage.
(Wikipedia)

The Art of Mythical Creatures by Kenji

My Great Gardens Lists by Kenji