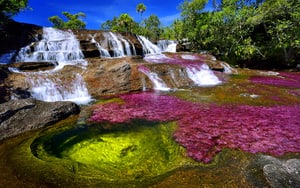 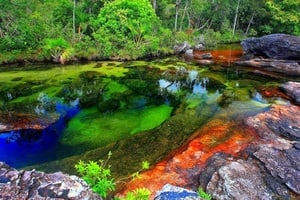 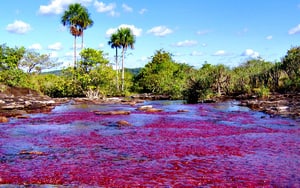 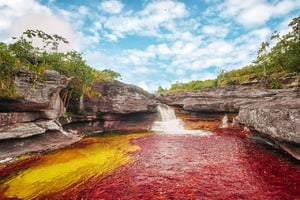 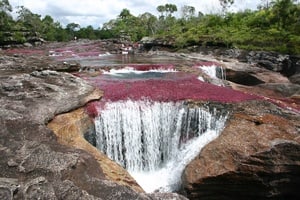 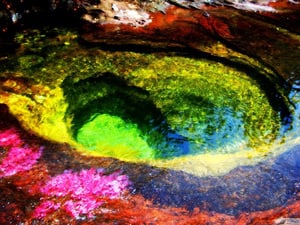 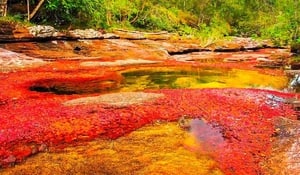 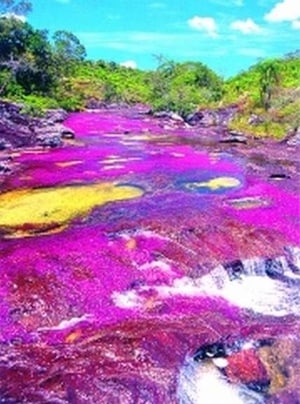 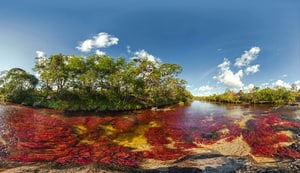 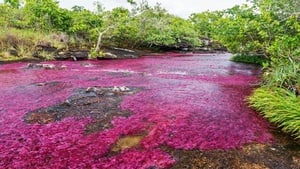 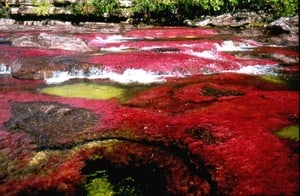 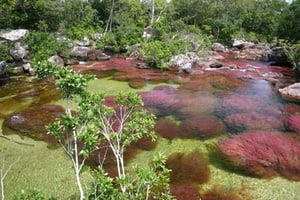 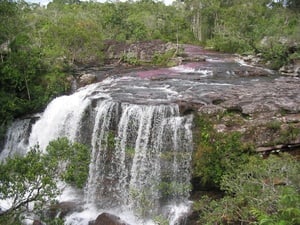 Caño Cristales is a Colombian river located in the Serrania de la Macarena province of Meta. The river is commonly called "The River of Five Colors" or "The Liquid Rainbow", and is even referred to as the most beautiful river in the world due to its striking colors. The bed of river in the end of July - November is colored in gaudy colors, including yellow, green, blue, black, and especially red, the last caused by the Macarenia clavigera (Podostemaceae) on the bottom of the river.

The quartzite rocks of the Serrania de la Macarenia tableland formed approximately 1.2 billion years ago. They are a western extension of the Guiana Shield of Venezuela, Guyana, and Brazil and belong to the oldest explosed rocks in the world.

Caño Cristales is a fast river with many rapids and waterfalls. Often in the bed have formed small circular pits - giant's kettles, which have been formed by pebbles or chunks of harder rocks. When one of these harder rock fragments falls into one of the cavities, it is rotated by the water current and begins to carve at the cavity wall and increases the dimensions of the pit.

The Serranía de la Macarena is located on the border of three large ecosystems, each of them with high diversity of flora and fauna: the Andes, the Eastern Llanos, and the Amazon rainforest. Plant and animal life are struggling with the lack of nutrients on the solid rock surface of the tableland and have developed diverse adaptations. The representative biome of the Serranía de La Macarena is the hydrophytic rainforest: hot, warm, and cold. The tableland is home to about 420 species of birds, 10 species of amphibians, 43 species of reptiles, and 8 primates.

Caño Cristales river has aquatic plants but is devoid of the fish. The water of the river is extremely clean due to the lack of nutrients and small particles.Almost unique is the bright red - pink coloration of riverbed after the rainy period in the end of July - November. This color is caused by great quantities of endemic plant species Macarenia clavígera. This plant is found in some more local rivers, such as the Caño Siete Machos. These red plants adhere tightly to rocks in places where the river has faster current.
(Wikipedia)

Hats off to you... by Akirah

Faces So Beautiful It Hurts - Ada Martini by parryj

The Elan Valley by Kenji