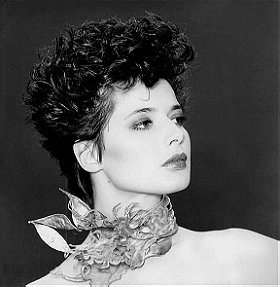 Her modeling career began when she was photographed by Bruce Weber for British Vogue and by Bill King for American Vogue. She has since worked with the industry's most distinguished photographers, including Richard Avedon, Steven Meisel, Helmut Newton, Peter Lindbergh, Norman Parkinson and Eve Arnold. She has appeared on the cover of such magazines as Vogue, Elle, Marie Claire, Bazaar and Vanity Fair. An exhibition of photographs of Rossellini, Portrait of a Woman was held in March 1988 at the Museum of Modern Art in Paris.

Rossellini made her cinematic debut in 1979 in Paolo and Vittorio Taviani's Il Prato (The Meadow). Her American film debut was opposite Mikhail Baryshnikov and Gregory Hines in Taylor Hackford's White Knights. In 1986, she starred opposite Dennis Hopper as Dorothy Vallens, the tortured lounge singer, in David Lynch's haunting and controversial Blue Velvet. She recently starred in The Feast of the Goat, Luis Llosa's screen adaptation of Mario Vargas Llosa's novel which screened at the 2006 Berlin Film Festival and HD Net Film's urban drama All Fall Down, opposite Anthony LaPaglia. In 2003, Rossellini starred in Guy Maddin's The Saddest Music In the World, an eccentric tale about a Depression-era contest to find the world's saddest music. She also starred in Dylan Kidd's critically acclaimed film, Roger Dodger opposite Campbell Scott. The previous year, she appeared in Empire, alongside John Leguizamo and Peter Sarsgaard.

Her other film credits include Cousins, Zelly and Me, Wild at Heart, Death Becomes Her, Fearless, Wyatt Earp, Big Night, The Imposters and The Funeral. Her portrait of the Jewish Hasidic mother in Left Luggage, directed by Jeroen Krabbe, won a special award at the Berlin Film Festival in 1998.

Rossellini most recently appeared on television in several episodes of ABC's Alias. She also starred in the television movie Monte Walsh for TNT opposite Tom Selleck and in Napoleon for A&E opposite Gerard Depardieu, John Malkovich and Sophia Loren. Her other television credits include Legend of Earthsea, Merlin, Don Quixote, The Odyssey, The Frightening Frammis, The Gift, Crime of the Century (Golden Globe nomination) and on the series Chicago Hope (Emmy nomination).

On stage, she made her American theater debut in Spring 2004 in Terrence McNally's off-Broadway play The Stendhal Syndrome.

1. In the Name of the Father, the Daughter and the Holy Spirits: Remembering Roberto Rossellini with DV

2. In the Name of the Father, the Daughter and the Holy Spirits: Remembering Roberto Rossellini with DV

onclelapin posted a image 1 week ago

Campagnola voted for 17 images [View All] 4 months, 2 weeks ago

Battleax voted for an image 5 months, 3 weeks ago

Henny voted for an image 10 months, 1 week ago

Look Left voted for an image 10 months, 2 weeks ago

Nusch voted for an image 1 year ago

150 Most Beautiful Actresses Of All Time (159 person items)

Darthmasco added this to a list 1 year, 5 months ago
Gemini (241 person items)

Minerva13 voted for an image 1 year, 7 months ago

rose77 added this to a list 2 years, 2 months ago
My Favorite Celebrities in their 60s (82 person items)

aprohor voted for an image 2 years, 5 months ago

Costarello voted for 22 images [View All] 2 years, 6 months ago

Costarello voted for an image 2 years, 6 months ago

looksharp voted for an image 2 years, 7 months ago

fantazjusz voted for an image 2 years, 9 months ago

aLittleTyger voted for an image 2 years, 10 months ago