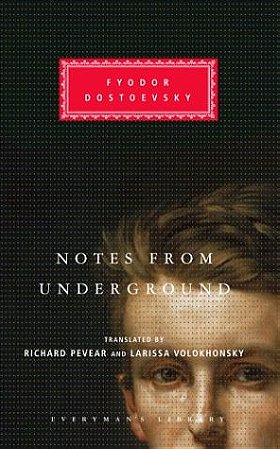 62 votes
101 books I would take along to desert island (101 items)
list by Ruisperkele
Published 10 years, 1 month ago

youngbloods
Yeah it's fairly good, wasn't so stunned and amazed as some people say they were after reading it but ermmm, it was a pretty good read you know and I would recommend it to people who like quite a different read from normal books.

So overall, average book.
View all Notes from Underground reviews
Dostoevsky’s most revolutionary novel, Notes from Underground marks the dividing line between nineteenth- and twentieth-century fiction, and between the visions of self each century embodied. One of the most remarkable characters in literature, the unnamed narrator is a former official who has defiantly withdrawn into an underground existence. In full retreat from society, he scrawls a passionate, obsessive, self-contradictory narrative that serves as a devastating attack on social utopianism and an assertion of man’s essentially irrational nature.
Manufacturer: Vintage
Release date: 30 August 1994
ISBN-10 : 067973452X | ISBN-13: 9780679734529
Tags: Novel (2)
My tags:

alphaguy added this to wanted list 1 month, 4 weeks ago

braian6121 added this to wanted list 8 months, 4 weeks ago

WillChangeTomorrow rated this 10/10 1 year, 2 months ago

Martínez 06 added this to wanted list 1 year, 9 months ago

" I say let the world go to hell, but I should always have my tea. I swear to you gentlemen, that to be overly conscious is a sickness, a real, thorough sickness. I've never been a coward at heart, although I've always been a coward in action; an intelligent man cannot become anything seriously, and it is only the fool who becomes anything."

PulpRoman rated this 6/10 2 years ago

JaJlN2 added this to wanted list 2 years, 7 months ago

thatmaskedman rated this 7/10 3 years, 7 months ago

reviewbytrevor rated this 9/10 4 years, 2 months ago

InTheWitheringWind rated this 6/10 4 years, 4 months ago

italia23 added this to wanted list 5 years, 1 month ago