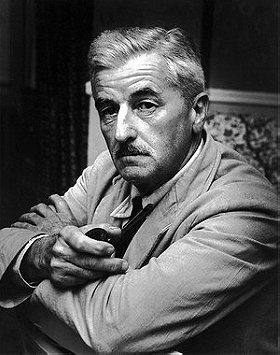 1 vote
View all William Faulkner pictures
William Faulkner was an American writer known for his novels and short stories set in the fictional Yoknapatawpha County, based on Lafayette County, Mississippi, where Faulkner spent most of his life. Faulkner is one of the most celebrated writers of American literature, and is widely considered one of the best writers of Southern literature. Faulker also served in the Royal Canadian Air Force during World War I. He also tried to join the United States Army Air Forces during the Second World War but was rejected. He instead worked on local civil defense.
Tags: Southern Gothic (2), Male (2), Nobel Prize Winner (1), Writers In The Military (1), Canadian Military (1), Royal Canadian Air Force (1), Civilian Public Service (1), World War II Veteran (1), World War I Veteran (1), Born In Mississippi (1), Born September 25 (1), Died Aged 64 (1), Died 1962 (1), Born 1897 (1), Usa (1), Air Force (1), Veteran (1), Novelist (1), Author (1), Straight (1)
My tags:

1. The Sound and the Fury

5. As I Lay Dying
View all William Faulkner books (73 more)

3. The Sound and the Fury

1. The Sound and the Fury

1. The Past Is Never Dead: The Story of William Faulkner

1. The Past Is Never Dead: The Story of William Faulkner

Nusch added this to a list 5 years ago
Deaths through alcohol: writers (4 person items)

vadeboncoeur added this to a list 6 years, 3 months ago
My favorite writers (156 person items)

moviebuff added this to a list 6 years, 7 months ago
Most Influential Arthurs Of All Times (39 person items)

cudion added this to a list 6 years, 8 months ago
Most read these authors (35 person items)