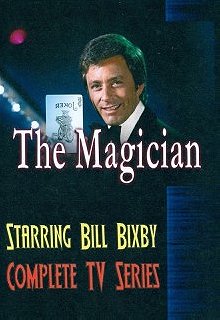 View all The Magician lists

View all The Magician videos

Years earlier, Blake had been unjustly confined in a prison in an unnamed country in South America. He discovered a way to escape with his cellmate, which began his interest in escapology. The cellmate died and left him a fortune. The escape led to a career in stage magic which made him famous. He never forgot his imprisonment, and it motivated him to seek justice for others.

The show is noteworthy in that Bixby insisted on doing all of the magic himself, without any trick photography.

imagiwiz added this to wanted list 6 months, 2 weeks ago